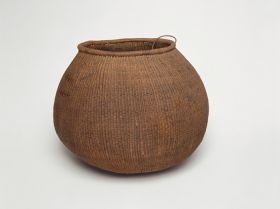 Humphrey No. 127: ‘a round deep basket formed of twigs, with a narrow mouth overlaid with plaited Cordage, from Otaheite.’

The barrel-shaped basket consists of a wicker-work of coconut leaf ribs (niu or ha’ari, Cocos nucifera). The vertical ribs are intertwined with ribs running concentrically upwards from the centre of the flat basket. On the upper rim, the vertical ribs are inserted into a bundle of small sticks forming the border coil of the round-oval basket opening and tightly wound with braided coconut fibre strings. On one side, a string of twisted plant fibres is wound round this border coil, knotted at the end, and probably serving to suspend or secure the basket.

A similar basket is depicted by Parkinson (1773: 75, PI. 13, No. 6) without any details being given regarding its use. According to the scant information available, baskets like this were used for holding live bait (flying fishes) which was thrown into the water on the open sea to attract fish, as well as for transporting the catch on the way back from fishing. The baskets were secured to the side of the boat in such a way that there was continually enough water passing through to keep both bait and catch fresh (cf. Bunzendahl 1935: 179).

Kaeppler (1978a: 147) also assumed that the Göttingen specimen was used as a fish basket, and listed comparable objects from the collections in London (British Museum) and Stockholm, as well as baskets, now missing, from Cambridge and Oxford.

Handy (1971: 16-63 and 1932: 97-101) wrote in great detail about the manufacturing techniques of baskets and about the various indigenous names. Gundolf Krüger

Back to Tahiti & Society Islands
Back to Baskets & fans