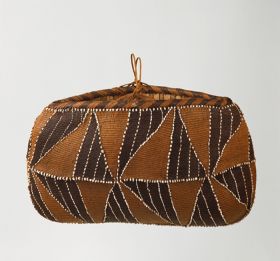 Humphrey No. 133: ‘Another of the beautiful beaded baskets of the friendly isles. The angles in this are differently placed from the other two just described, being set perpendicularly, whereas those run horizontally, both sides of this basket alike, consisting of 2 Rows of the triangles divided by a row of Shell beads larger than those which edge the triangles, the black triangles have each three rows of Shell beads the border of plaited Cordage is placed in a twisted form, and it has a similar string to that of No.131. all the three baskets are lined with a coarse kind of Matting.’

The basket is made of coconut fibre and has an oval shape. The pattern features two horizontal rows of alternating triangular sections of either a brown or blackish brown colour. The triangles are bordered by rows of small pieces of shell intertwined into the basket. The darker sections are additionally decorated with vertical lines made in the same manner.

The baskets of the kato mosi kaka type were made of ‘twined coconut fibres in two colours and [were] decorated with beads of shell’ (Kaeppler 1978a: 219). Arbeit (1990: 40) gave a detailed description of the material used and also commented on the function of this type of basket: ‘The mosikaka was made from the dyed and undyed separated fibres of coconut husk, leaf sheath, or roots (information is conflicting on this detail). The single strands were twined together in double pairs to create a flat, flexible satchel. ... They were also constructed on bases of knotted sennit, or checker-work pandanus, or wooden cylinders, and (a variant technique) on coconuts. Frequently its triangular patterns were accented with small white shells. One early writing states that the soft mosi kaka was used by chiefly ladies to carry bits of white tapa impregnated with fragrant coconut oil.’ The kato mosi kaka was the highest ranking type of basket. Inken Köhler, Ulrike Rehr, Gundolf Krüger

Back to Tonga
Back to Baskets & fans