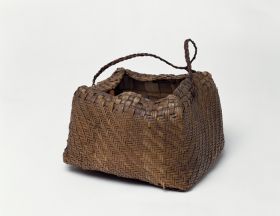 The basket is made of pandanus leaves. The pattern consists of alternating narrow stripes of either a brown or a yellowish colour. The basket can be closed with a flap from the rear which is meant to be tied to the front. However, this device is missing. A loop of plaited coconut fibre is attached to the back of the basket.

Forster (1989, I: 348) referred to Tongan baskets in general, noting that they were made of coconut fibre. Many of them had designs of black or brown; others were plain and decorated with corals. The baskets differed greatly in form and pattern. Mariner’s (1817b: 295) statement is more specific with respect to the material used for manufacturing the baskets: ‘These [the baskets] are of various constructions; sometimes of a sort of matting made with the leaves of the fa, paoongo, lo acow, & c.; at other times of the fibrous root of the cocoa-nut tree, interwoven with plait made of the husk of the nut, and have rather the appearance of wicker-work: the latter are sometimes variously stained and ornamented with beads or shells worked in.’ Ferdon (1987: 113, 116) stated that the plants fa and paonga (paoongo), referred to by Mariner, are both species of pandanus. Lou akau is the general term for pandanus. Except for the latter, the use of the above materials was also verified by Anderson (in Beaglehole 1967, lllb: 933): ‘... little baskets made of the same substance as the matts [pandanus] and others of the fibrous Cocoa nut husk, either plain or interwoven with small beads ...’ Among the designs on Tongan baskets were horizontal lines, zigzags, diamonds, radiating lines, and a pattern representing a bird (Greiner 1971: 71).

Baskets were used for carrying many items, for example, fruit and vegetables, coconuts, fish, cooked food, or sand (Grijp 1995: 208).

Grijp also distinguished between two types of baskets, namely those made of pandanus leaves, and those of coconut palm leaves. However, various subdivisions can be made within these categories depending on how the baskets were woven and used. Generally speaking, baskets made of coconut palm leaves were manufactured by both men and women, whereas the fabrication of the pandanus baskets was largely the task of the women. Mariner (1817b: 295) stated that baskets were generally manufactured by women. The baskets made by men were larger and coarser, and were intended to hold tools or carry food provisions. Ferdon (1987: 113) supported this statement: ‘... all of those of fine weave and others with decorative elements were the products of Tongan women.’ Inken Köhler, Ulrike Rehr, Gundolf Krüger

Grijp, Paul van der, ‘Made in Tonga, manufacture and arts objects from leaves, bark and wood’, in Dirk AM Smidt, Pieter ter Keurs and Albert Trouwborst (eds), Pacific Material Culture. Essays in Honour of Dr. Simon Dooijman on the Occasion of his 80th Birthday, Leiden, 1995, pp. 200-218.

Back to Tonga
Back to Baskets & fans