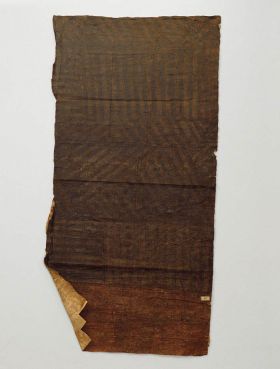 Humphrey No. 35: ‘Part of a very large piece of Bark Cloth, the ground dark (except the border which is red) striped with black, & glazed from the Friendly Isles.’

The barkcloth exhibits a pattern of broad black stripes that stands out only slightly against the blackish–brown background colour of the piece. The stripes run horizontally, vertically, and diagonally. One border of the piece features a red stripe (c. 24 cm in width). The Tongan word for large pieces of barkcloth in general is ngatu, whereas the widespread term tapa refers only to uncoloured cloth or, as the term is used today, to the uncoloured border of coloured cloth (Kooijman 1972: 301). ‘When gnatoo [ngatu)] is not printed or stained, it is called tapa’ (Mariner 1817b: 293). The bark used for making ngatu was that of the hiapo or paper mulberry (Broussonetia papyrifera) and the bread-fruit tree (Artocarpus) (Kooijman 1972: 299); the majority of the barkcloth was made of the former (Ferdon 1987: 118). Ngatu was produced in different stages of work. Two main tools were used for the beating process (the second stage): the anvil (tutua) and the wooden beater (‘ike) (Kooijman 1972: 302). Repeated folding and beating ensured that the fibres spread equally, this preventing the piece from breaking up (Ferdon 1987: 119). ‘The bark thus far prepared is called fetagi [feta’aki], and is mostly put aside till they have a sufficient quantity to go on at a future time ...’ (Mariner 1817b: 290). The feta’aki were pasted together with a paste made from, e.g., arrowroot, and were decorated (Kaeppler 1995: 104). This made the barkcloth somewhat stiff and water-resistant. ‘The colouring and decoration is done mainly by rubbing into the tapa the relief pattern of kupesi or design tablets which are usually made of strips of leaf mounted on a curved wooden base’ (Kooijman 1972: 307). After this stage, the product was referred to as ngatu. The finished piece was put in a heated earth oven for a few hours in order to fix and darken the dye (Ferdon 1987: 122).

Different kinds of ngatu can be distinguished according to technical and artistic features, and in this respect were intended for different uses. Basically, Tongan barkcloth from Cook’s voyages can be classified as either ngatu ‘uli, dark barkcloth (‘uli meaning black), or ngatu tahina, barkcloth of a lighter colour. The ngatu ‘uli were used for funeral and wedding ceremonies. The ngatu tahina were used primarily, but not exclusively, for the more everyday aspects of life, for example as a blanket (Kooijman 1972: 320, 323f). In summary, barkcloth was used for ‘clothing, bed coverings, interior decoration, and ritual presentation, especially weddings and funerals’ (Kaeppler 1995: 104).

Barkcloth was manufactured by the women. Whereas the work of the initial stages (namely the production of the feta’aki) was carried out individually, the rest of the process required the women to work together in groups of varying size (Kooijman 1972: 318). ‘[T]he embroidering of the cobechis [kupesi], or stamps, is always done by women of rank’ (Mariner 1817b: 293). Inken Köhler, Ulrike Rehr, Gundolf Krüger

Back to Tonga
Back to Barkcloth