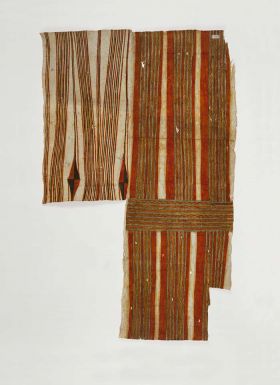 Humphrey No. 29: ‘a piece of Bark Cloth, of a white ground, singularly figured in lines, stripes, waves of various colours & greatly resembling a beautiful printed Cotton, from Sandwich Islands.’ (=Oz 589)

The barkcloth is thick and grooved, and consists of several parts sewn together. It has a light colour and is decorated with red and black lines on one side only. One half of the decorated side features a pattern of bundles of red and black lines. These bundles run alternately towards and away from each other. The grooves are clearly visible on this half. The pattern of the other half features broader red stripes framing narrower red and black wavy lines, painted on either a light or ochre background (= Oz 589).

The piece Hanover 1854, No. 45 has been cut from Oz 589. It features a pattern of parallel bundles of alternating black and red lines.

Barkcloth was made from the plants wauke (Broussonetia papyrifera, paper mulberry tree), mamake (Pipturus albidus), maaloa, poulu (bark of breadfruit shoots), hau (hibiscus), and olona (Malo 1951: 48, Emerson in Malo 1951: 50). ‘The paper mulberry [wauke], however, was by far the most important and was cultivated specifically for making bark cloth’ (Kaeppler 1975: 9). Regarding the manufacture and decoration of barkcloth, Clerke (in Beaglehole 1967, IIIa: 594) stated: ‘[They] beat it out into small pieces of about three feet wide, and four or five long, which are thick and durable; these they sew together and so extend them to what length they please ... They dye their Cloth in a variety of fashions, and with such a degree of exactitude that we made no doubt but they must have contrived some method of printing it, however we several times saw them, during our stay, lay on the differnt colours by hand with an Instrument resembling a Pen made with a Reed.’

Concerning the material used in manufacturing barkcloth and the process of dyeing, King (in Beaglehole 1967, llla: 625) wrote: ‘Their Cloathing divides itself into three branches, The Manufactoring of Cloth for common wear, their Matts for Sleeping & for battle, & their Ornamental dresses. The bark of the paper Mulberry plant & breadfruit tree suppli’s them with the first, & which they prepare in exactly the same manner, & with the same instruments [as] at Otaheite ... The Red Colour is prepar’d from the Same Milky substance, squeis’d from a Berry, & the leaf of another plant soak’d in it; their Yellow colour is extract’d from a root, & also from leaves [more likely a bark], some of them the same as at Otaheite. They make out of the Bamboo a pen with the back of which dipp’d in the paint, & with the Assistance of another piece of Bamboo to steady the hand, their cloath is Staind.’ Beaglehole’s (1967, IIIa: 625) comments make clear that the red colour was a juice collected from ‘Mati Berries’ (Ficus tinctoria) and ‘leaves of Tou’ (Cordia subcordata), but possibly also from other plants. He classifies the root mentioned in the quote above as ‘tuber of turmeric, Hawaiian ‘Olena’ (Curcuma domestica), or ‘Noni’ (Morinda citrifolia).

Once the bark-cloth had been separated and soaked in water to become soft and clean, the process of flattening the pieces began. This was carried out in two stages. During the first stage, called ho’omo’omo’o, the barkcloth was placed on a wooden (according to Buck, stone) anvil and processed with a round beater (hohoa). During this process, the bark was beaten into long strips (mo’omo’o). These were soaked in water in a bundle until they became soft. During the second stage, called kuku, the soft bundle was placed on a wooden anvil and processed with a square beater (i’e kuku) until the single strips were felted and formed a rectangular piece. Afterwards, the tapa was dried in the sun (Buck 1957: 180-82; Kaeppler 1975: 9). A more detailed description of the two kinds of tapa beaters (hohoa and i’e kuku) is given by Buck (1957:169-79). There are two different kinds of tapa decoration, one being the so-called watermarks (a result of the second beating stage), and the other being the painted or printed designs on the tapa surface (Kaeppler 1975: 9, 12).

There were different categories of tapa which could be distinguished not only by the fragility of the material, but also by the ornamentation. The classification used here, distinguishing between thicker and thinner pieces, is that used by Kaeppler. Visible differences corresponded with different ways of using the tapa. ‘There were many varieties of tapa, sheets, blankets, robes, malo [loincloths], pa-it [loin-skirts], etc., which the women decorated in different patterns with black, red, green, yellow and other colours’ (Malo 1951: 48f.). Barkcloth was produced by the women, ‘[who] not only had to manufacture ... tapas for chiefly tribute and sumptuary display but also for the domestic use and clothing of their own households’ (Linnekin 1990: 42). With regard to a special kind of tapa, however, Kamakau (1976: 112) stated that’ [t]he work of making hamo’ula or ribbed tapa ... [also called kua’ula], was the work of men, not of women.’ Even though it was the task of men to remove the branches of the extensively cultivated paper mulberry tree (wauke), it was the women who were responsible for peeling off the outer bark and soaking the inner bark in water until it was ready for further processing (Malo 1951: 48).

Regarding the social significance of tapa, Linnekin (1990: 41) noted: ‘In Hawaii fine mats and tapas were markers of high chiefly status. Their abundance within chiefly dwellings categorically distinguished the houses of chiefs from the commoners’ unadorned huts, which contained but a few coarse mats and tapas.’ Inken Köhler

Back to Hawaii
Back to Barkcloth