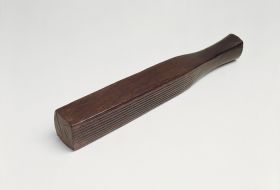 Humphrey No. 205: ‘An instrument made of hard wood, square, except at the handle which is rounded... ‘Tis used by the Natives of Otaheite in making their Cloth...’

The beater is carved from a piece of the heavy hardwood toa or ‘aito (Casuarina equisetifolia). It consists of a beater and a handle. The cross-section of the beater itself is almost square. Its four sides each feature a variable number of coarser to finer grooves. The end surface of the beater has two V-shaped marks positioned slightly off-centre which are formed like a relief, their points facing each other.

The handle, tapering in the middle, is circular in cross-section and has a smooth surface. The handle becomes thicker towards the end and ends in a pyramidal shape.

The implement is used to beat the bast from which barkcloth, ‘ahu, is made. Parkinson described the appearance of such beaters and their use: ‘After the bark has been soaked in water for a few days, they lay it upon a flat piece of timber and beat it out as they think proper with a kind of mallet of an oblong square, each side of which is cut into small grooves of four different sizes: they begin with that side where there are the largest and end with the finest, which leaving longitudinal stripes upon the cloth makes it resemble paper’ (Parkinson 1773: 18f.). While the men procured the raw material, the beating of the bast on a beating board tutua was teamwork for the women (Hambruch 1926: 51). In the process, several strips of bark bast were laid next to, or on top of, each other and worked from both sides, the women beating in time and often accompanying the prescribed rhythm with songs (cf. Cook in: Beaglehole 1955, I: 132f.; Banks 1896: 147; Heermann 1987: 80). Occasionally the ‘feminine male associates’ of the women, i.e. the transvestites, mahoo, also participated in the work. The barkcloth pieces specifically for the images of the gods and the garments of the priests were made by the guardians of the marae, or by the priests themselves (cf. Bunzendahl 1935: 130).

The specimens in the collections in Vienna, Stockholm (Sparrman Collection), Dublin, Cambridge, Oxford, London, and Wellington, New Zealand essentially correspond to the two examples of the Göttingen Collection with respect to form (cf. Kaeppler 1978a: 150f; Söderström 1939: 30, PI. 4, No.2). The piece depicted in Parkinson (1773: 75, PI.13, No. 5) clearly shows the variety of longitudinal grooves on the respective striking surfaces. Moschner (1955: 170f.) in particular referred to the flat, V-shaped carving at the beater’s end, as can be seen on the Göttingen pieces. Gundolf Krüger

Back to Tahiti & Society Islands
Back to Barkcloth