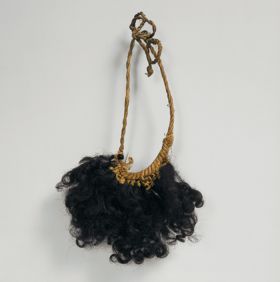 Humphrey No. 51: ‘a plaited fillet made of Cordage to which a number of small bunches or locks of curled human hair are tied, serving as a fence to keep off the rays of the Sun from the Marquesas Isles.’

The numerous small, brownish-black and curled tufts of hair are individually set, i.e. wrapped with fibres and set into a plaited band (cf. Linton 1923: 424f.). According to Handy, ouoho literally means ‘hair on one’s head’ in contrast to ‘pavahina‘, ornaments consisting of the white hair from the beards of old men. With respect to the manufacture and the function, Handy (1923: 283) reported the following: ‘When ouoho were made for a sacred child its pahupahu (maternal uncles and paternal aunts), ... cut off their hair for the purpose. It was taken to a tuhuna hana titi ouohu [specialist] who wrapped it on small sticks, bound these with leaves and baked the rolls in an oven of heated stones. The curled hair was then attached to a braided band of sennit. When a chief desired ouoho for his child his people were called upon to supply it. Hair of enemies was also used.’ Linton stated (1923: 425) that such ornaments were worn by men and women on the occasion of feasts (cf. the illustrations in Handy 1923: Fig. 25e; in Linton 1923: PI. 76, e). Von den Steinen reproduced a picture of two old men (1928: dC No. 3) almost completely dressed in human hair ornaments.

Cook wrote regarding this decoration: ‘They also wear bunches of human hair around their legs and arms &ca’ (1961, II: 373).

They also attached much importance to the tufts of human hair which were tied with strings around their body, around arms, knees and thighs’ (Forster 1989, II: 19). Brigitta Hauser-Schaüblin

Beaglehole, John Cawte, The Journals of Captain James Cook on his Voyages of Discovery. The Voyage of the Resolution and Discovery 1772–1775, Hakluyt Society, Extra Series, 35, Cambridge University Press, Cambridge, 1969 [1961, II].

Back to Marquesas
Back to Jewellery & adornment