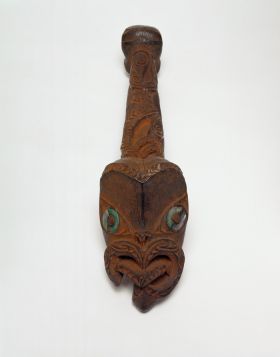 Humphrey No. 199: ‘Part of the ornament of a Canoe of a singular shape done in wood and coloured red, ‘tis carved all over in a very uncommon stile, chiefly in volutes and spirals; at each end as a horrid Face with a tongue lolling out. Very like some of the ancient Roman Masks, the eyes of one of them are formed of pieces of the iris Ear-Shell. Such faces as these were frequently held up, supposed by way of defiance, to the people of Capt. Cook’s ships by the Warriors of New Zealand, from whence this article is.’

Part of a boat (?) or decoration (?) made of red-painted wood, both ends featuring a human face with tongue extended, the larger face with inlaid mother-of-pearl eyes. The right side of the chin of the face is damaged.

Strangely enough, there is no proof of canoe prow carvings having been collected on Cook’s voyages, although they were often seen, sketched, or described. Whether or not Humphrey’s interpretations are appropriate for this piece is doubtful. Although Kaeppler (1978a: 201) also described the Göttingen figure as a possible canoe prow ornament, and gave the representation of a boat in a drawing for comparison, this explanation remains inadequate, especially given the small head at the rear.

Phillipps (1955: 149) interpreted comparable items in the British Museum as being ‘decoy bird perches’: ‘probably part of some erection in which each is attached to a lower pole or frame work for transporting a special captive or decoy bird. Some of these objects appear without being slotted as seen here, but all may have been used for transporting special captive birds and carried in the hand by a slave or assistant.’ Shawcross (1970: 339-41) depicted a similar piece from the collection in Cambridge from Cook’s first voyage - the central part of this however featuring a somewhat differently formed groove or eye for fastening - and discussed its possible application. He described the object as a ‘piece of well-carved wood, consisting of a mask, from which there is a backward extension carved with a bird-like manaia figure, perforated with mortices, and terminating in another, egg-shaped head’ (Shawcross 1970: 339). The dimensions of this object are virtually identical, only the mask is somewhat larger (12.4 x 7.8 cm). A piece more like that in Göttingen, and formerly held in the Oldman Collection (cf. Duff 1969: 40), can be found in the Canterbury Museum. ‘Of the several suggestions regarding use, that of a ceremonial version of a snare perch for a decoy kaka seems least unlikely. The standardised shape comprises a boldly carved terminal mask deeply pierced at mouth and neck, with deeply carved shaft channelled by side grooves pierced right through at the mid-point’ (Duff 1969: 40). Oldman depicted two further examples, one of which was similar to the Göttingen piece (PI. 57), without however being able to say anything about their significance. ‘It has been suggested that they may be fishing rod, hand-net handles, parrot snares or perches ... No wearing caused by lashing or attachment is evident anywhere on either specimen’ (Oldman 1946: 21). The bird traps depicted by Buck (1952: 96) bear only a superficial resemblance to the pieces above; in particular the eyes for fastening appear to have a different function, so that Shawcross was also in doubt over this application. Hence, the significance of these objects still remains unclear today. Markus Schindlbeck

Oldman, WO, Skilled Handwork of the Maori: Being the Oldman Collection of Maori Artifacts Illustrated and Described, Wellington, 1946.

Back to New Zealand
Back to Household