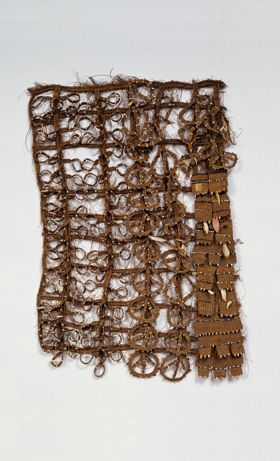 Humphrey No. 110: ‘An ornamental openwork apron made of Cocoa nut rind ingeniously tied and woven together enriched with Shell and Cocoa nut beads, Fishes teeth, Shells, scarlet feathers and other trinkets, worn by the Women of the Friendly Isles.’

The brown apron consists of a rectangular latticework made of coconut fibres, with attached rings (similarly made of coconut fibres) and rectangular pieces of fibre (half-woven or plaited). The rings are 1.5-6 cm in diameter. The larger rings are divided up by one or three plaited fibre strands. Strips made of strands of dark brown fibres are incorporated into the rectangular pieces of fibre. They are embellished, as are the rings, with beads of shells and coconut pieces as well as with small shells, shell tiles, teeth, and some small red feathers.

Forster (1989, II: 85) already mentioned aprons of this type. Cook (in: Beaglehole 1961, II: 272) described mat weaves embellished with red feathers: ‘They have also a curious apron, made of the out side fibres of the Cocoanut shell and composed of a number of small pieces sewed together in such a manner as to form stars, half Moons, little squares, etc. and studed with beads of shells and covered with red feathers, so as to have a pretty effect.’ (cf. also Beaglehole 1967, Illa: 168) A piece very similar to that in Göttingen is held by the Pitt Rivers Museum in Oxford (Kaeppler 1978a: 213). Additional pieces of this type may be found in Florence and Berne (Kaeppler 1978a: 213f.; Kaeppler 1978b: 92-94).