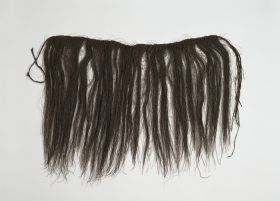 Humphrey No.48: ‘A short apron similar in shape to the next preceding, made of the long black Fibres of a Tree resembling hair, from the Friendly Isles.’

The apron consists of black plant fibres. Fibres up to 47 cm long are plaited into a 60 cm long band.

This object may have come from Fiji, and was perhaps traded in by the Tongans (Kaeppler 1978a: 216). Samwell (in: Beaglehole 1967, Illb: 1043) already reported that Fijians were resident on Tonga in 1777 and that there had been trade between Fiji and Tonga in times of peace. He also saw pieces of clothing (presumably made of barkcloth) which were imported from Fiji. Inken Köhler, Ulrike Rehr, Gundolf Krüger