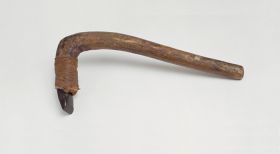 One of three completely preserved adzes that are all very similar in size. Their round handle with knee is made out of a piece of light brown, lightweight wood that tapers towards the handle end. The knee piece features four lightly cut edges, forming an angle rather more acute than 90° (degrees) to the handle. The end of the knee piece is formed step-wise and serves as a shaft for the blade. The blade itself is four edged and is made of basalt. With the exception of some splitting, all three blades have been carefully cut and are firmly attached to the shaft with a lashing of plaited coconut fibres. In the area of the neck of the blade, a lining of plant fibres can be recognised at the edge of the lashings in all three specimens.

All three objects are smaller than the Tahitian adzes, and correspond in their characteristics to the Tongan adzes, so that Humphrey’s regional origin above may be considered wrong (cf. Kaeppler 1978a: 232). The largest of the three (Oz 357) still features an easily recognisable Forster label implying that this object is one of the two objects from his legacy under A.13 (see above).

The Tongan adzes that Samwell designated togee are considered to be the most important tool, especially for boat-building. The raw material for blade, made of bluish, black, and blackish-pink glossy volcanic rock (Lapis Lydius) was absent on the flat island of Tongatapu. It was therefore necessary to transport it from the other islands of the archipelago, such as the volcanic island Tofua, to the main island (cf. Anderson and Samwell in: Beaglehole 1967, lllb: 921, 938, 1038, 1045 and Forster 1989, II: 143f.). Blades were also manufactured from shell material, as described by Ferdon (1987: 111f.). In addition to those of Göttingen, hafted adzes with the typical Tongan knee piece may also be found in a collection in Glasgow, as well as collections in Wellington and Christchurch, New Zealand (cf. Kaeppler 1978a: 232). Inken Köhler, Ulrike Rehr, Gundolf Krüger