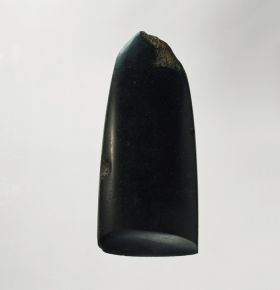 Basalt blade, with rounded-off neck, also rounded off lengthwise in cross-section. Corresponds to the type 2 B according to Davidson (1984: 93-100). New Zealand presented the early Polynesians with a wide variety of diverse stone materials. Basalt was the most frequently used rock. The various types of adze blade were differentiated according to the cross-section of the blade (Buck 1952: 183), with rectangular or four-sided cross-sections (four-edge), triangular, and inverted triangular cross-sections, and further differentiation between blades with shoulder necks and those without. Six types of adze could be differentiated in this way, a classification which is still valid today (Davidson 1984: 94).

The Maori mainly used adzes for working with wood; only a few were hafted as axe blades. They otherwise used chisels, augers, and files (Best 1924, II: 201). Some stone adzes had their own particular history and were thus highly valued, so having a certain degree of tapu. Stone adzes were sometimes buried along with the body of the deceased. Cook mentioned that the Maori were unwilling to part with these tools. However, these stone blades had already become scarce by the beginning of the nineteenth century. Many such stone blades in museum collections were found during field work, or otherwise in waste pits, in old settlements, and in graves. Best distinguished between three types of adze according to their use: larger, heavier adzes for rougher work, such as the hollowing out of canoes or for house construction; lighter adzes for finer wood-work; and finally adzes which were used more for ceremonial purposes, serving not only as weapons but also as symbols of prestige, and mostly with greenstone blades (Best 1912: 119).

According to Davidson (1984: 96), the four-edged blades with necks lacking shoulder form were present from the times of earliest settlement on. The form with the more rounded off cross-section became more common in the course of time. The type 2 B was most widely distributed in the North Island. The use of greenstone adzes especially increased in the South Island; by contrast, finds with such adzes are rare in the North Island. Markus Schindlbeck