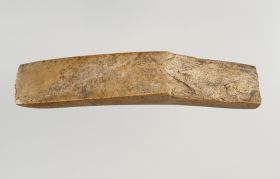 Humphrey No. 217: ‘A long adze made of a yellow calcareous Stone, from the Sandwich Isles.’

The adze blade is made of a yellowish limestone. The upper and lower surfaces of the sharp edge are rectangular. This part is about 14.5 cm long. The upper surface is slightly convex and is polished, as are the sides. The same is also true for parts of the lower surface, which is, however, basically rough. The other part of the object, also with a rough surface, is slightly bent and intended for attaching the adze blade to a handle.

The adze blades were made of stone, with one part being rounded and the other part forming an angle. This piece was then fastened to a handle (Handy 1965: 226). ‘[It was] polished to a nicely shaped edge and mounted on a wooden handle’ (Handy 1965: 226). The attachment was described by Brigham (1911: 199) as follows: ‘In fastening the stone adze (koi) to the handle (au), a fold or two of kapa was interposed between stone and wood before binding together with sinnet; when kapa could not be obtained hala [pandanus] leaves were substituted, but kapa was preferred.’

‘Cook (in Beaglehole 1967, Illa: 285) remarked: ‘Such of their working instruments or tools which I saw were the same as at the other islands, their hatchets or adzes exactly so, and seemed to be of the same kind of black stone, but they had others that were made of a clay coloured stone.’

Brigham (1902: 80-81) distinguished between three categories of ko’i: ‘Adzes may, for convenience, be classed in three divisions: with parallel sides and angular tang, ... with divergent sides and angular tang, ... [and] with divergent sides, thin and nearly flat ... That each of these was fitted for particular work I do not doubt, but I cannot go any farther.’

The handle usually consisted of roots grown in such a way that they formed an angle. This was mostly ulei wood, with hau (hibiscus) also being used. The pieces were cut out of the tree so that the trunk was the part to which the blade was attached. Grown at an angle, the branch itself formed the handle (Arning 1931: 15). The whole tool is called a hafted adze (Kaeppler 1978a: 112-14).

‘The koi, or stone ax, was a possession of value. It was used in hewing and hollowing canoes, shaping house timbers and in fashioning the agriculture spade, the o-o, and it had many other uses’ (Malo 1951:78). The hafted adze was also used for cutting bushes and trees. In addition, it was used for manufacturing tools, such as the spear (ihe) (Mitchell 1982: 111, 276). Arning (1931: 15) named wood-work and the making of canoes and bowls in this respect. Inken Köhler

Back to Hawaii
Back to Tools