Many things about this gorget single it out from the others in the Museum’s collection. Both gorget and recipient had lively histories which fortunately were recorded for posterity.

Most interestingly, this is the only gorget in the collection presented to honour a heroic deed by an Aboriginal person. He was one of a group of Aboriginal men who swam out to a sinking merchantman, saving life and cargo. 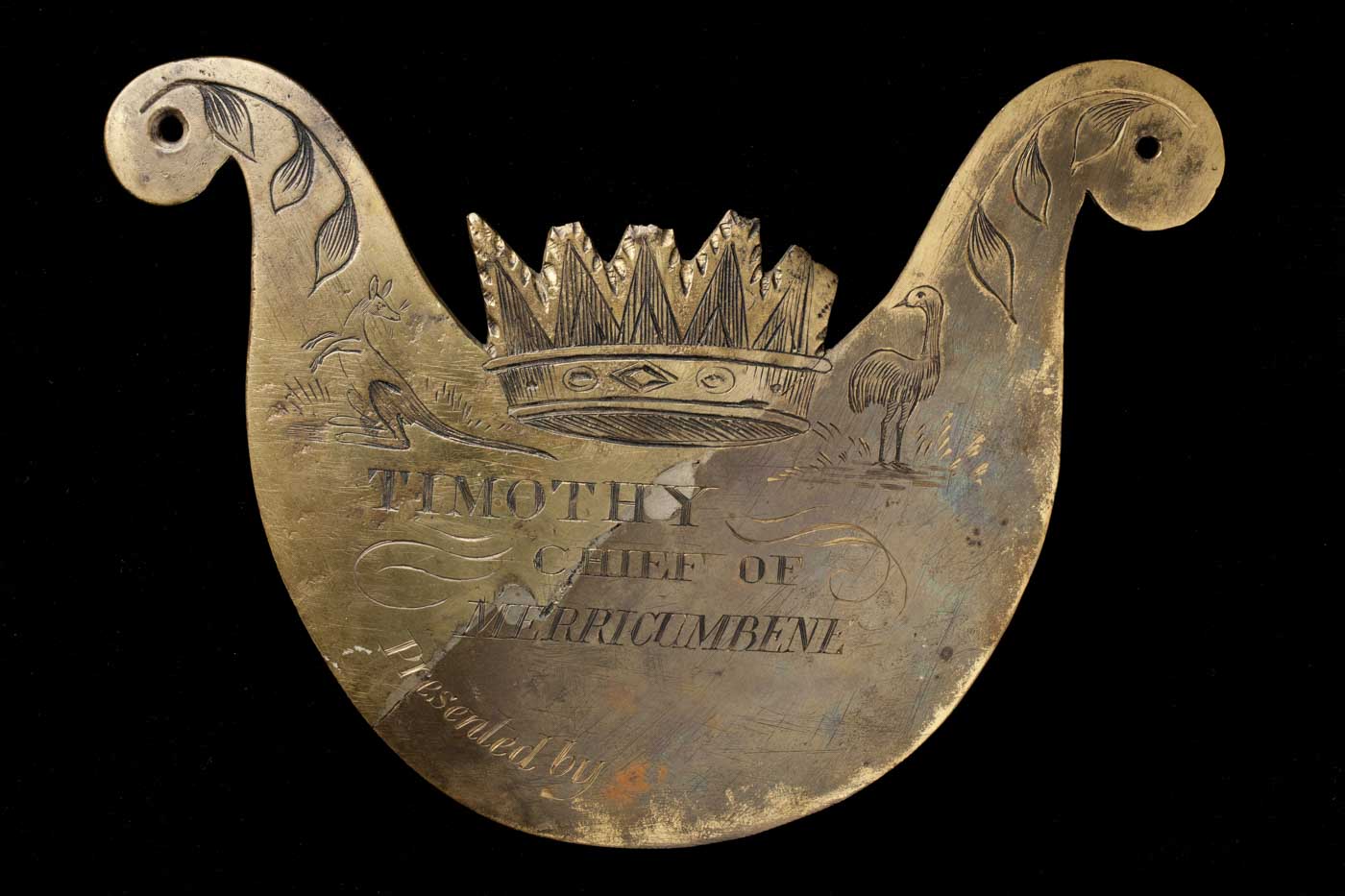 Originally a cast brass plate, the gorget was hacked apart and later repaired with a reconstruction in sawn brass soldered into position. The parts are similar but the reconstructed piece is inferior to the original in manufacture, engraving and finish.

The soldered joint is particularly disfiguring. In design the gorget is notable as the second of only two in the collection with a coronet incorporated as part of its unusual shape. The decoration is the popular emu and kangaroo with less common laurel branches borrowed from designs on military gorgets.

Half the gorget was acquired by Edmund Milne from R Fitzgerald of Nelligen in 1910. Fitzgerald, in a letter to Milne that accompanied the piece, told him that he had used it in making a boat:

After a lot of hunting I have found the peice [sic] of Blackfellows Plat [sic] which I am sending to you under seperate [sic] cover. When you receive it you will see it is not the piece of Plate I thought it should be as this one has been presented to a Blackfellow by name Timothy but cannot say by who, the other plate was presented to a Blackfellow by the name of Jimmy by Capt Oldrey R.N. and it had the words ‘Bale Me Jarrad’, on it, I dont think I cut it up But I cannot find it, you will think it silly of me to cut this one up as I have but at the time I was Building a Wager Boat and wanted some peices [sic] of Brass to finish it with so that is my excuse for doing so. [1]

The motto written on Jimmy’s plate was in New South Wales Pidgin and means bale ‘not’, me ‘I’, jarrad ‘fear’, or ‘I fear not’. The Jimmy mentioned by Fitzgerald was probably Jimmy Woodbury, an Aboriginal man who belonged to Timothy’s ‘tribe’. [2]

Milne had the gorget reconstructed by the jeweller WT Kerr, a member of the famous Kerr family of Sydney silversmiths: [3]

‘Timothy, Chief of Merricumbene. Presented by — ’. It will be noted that this plate has been restored. The smaller portion was found in an ash heap outside an old-time boat-building shed at Bateman’s Bay in 1911. ... It was confirmed that part of plate had been used in repairing the keel of a boat. Mr Milne had the plate repaired by Mr. W.T. Kerr, Silversmith, of Sydney. [4]

Read more about Timothy and the presentation of his gorget

[2] JP Townsend, Rambles and Observations in New South Wales With Sketches of Men and Manners, Notices of the Aborigines, Glimpses of Scenery, and some Hints to Emigrants, Chapman and Hall, London, 1849, pp 106–07.