Chief of the Duedolgong Tribe, Argyle

This sand-cast brass gorget is another of the five which have pictures of Aboriginal people incorporated into design. The engraved decoration is a lively tableau.

An Aboriginal man has just fired a gun at a dingo which looks back at the hunter while running away through long grass. All the actions of the gun, the strike of the hammer, the blast from the barrel and the smoke rising back from the charge, are indicated with fine engraved lines. 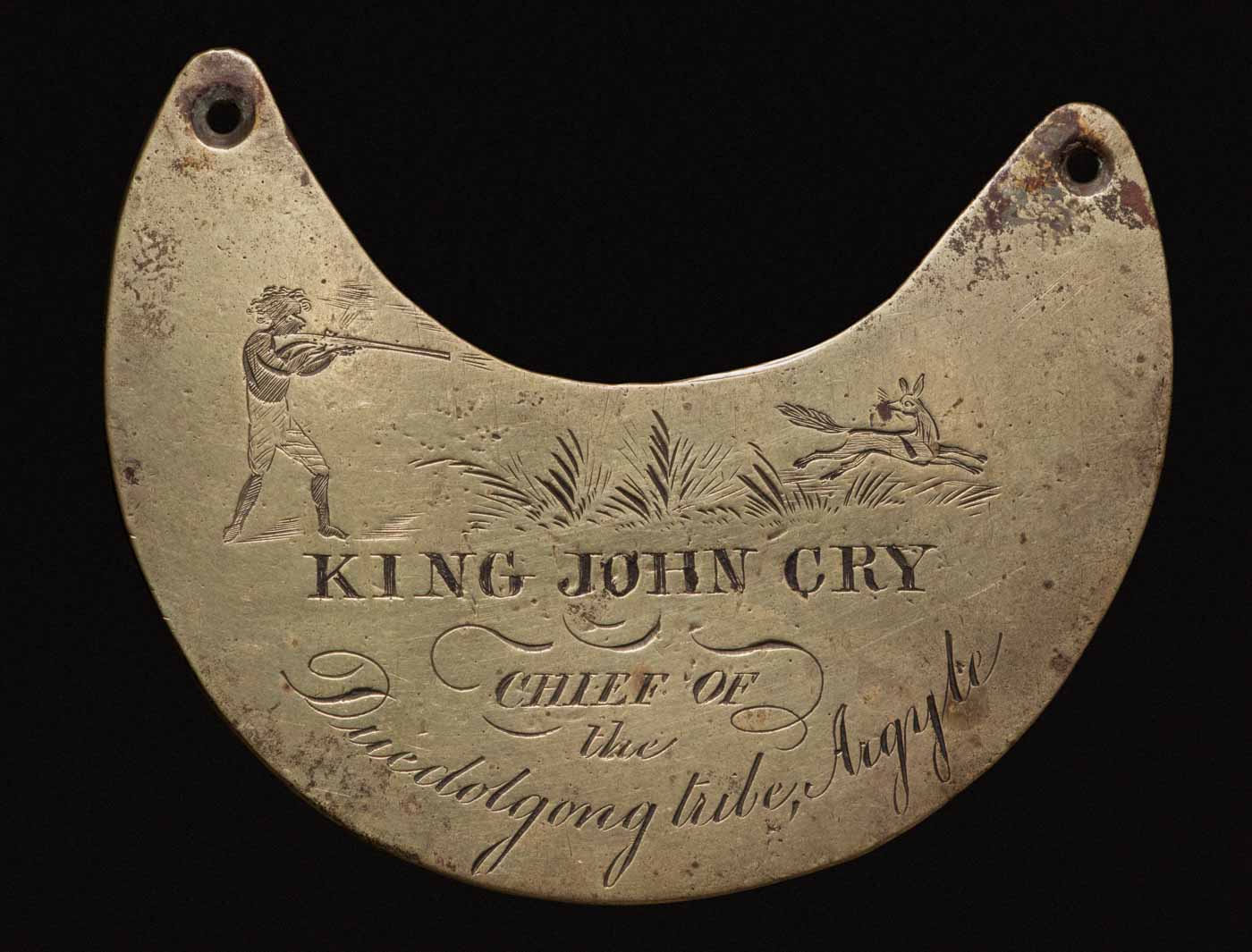 Although the victim looks very like a fox an examination of 19th-century pictures of dingoes reveals that early artists generally produced the brushy-tailed specimen depicted here. The deep crescentic shape of the plate, style of lettering and early form for the dingo suggest that stylistically the plate appears to be from the early half of the nineteenth century. The dating also reinforces that of the blanket list.

King John Cry and the ‘Duedolgong Tribe’ are elusive. However, on the New South Wales Government blanket distribution list ‘Return of Aboriginal Natives taken at Janevale Murrayshire June 1834’ a man is listed who is very likely to have been King John Cry, given the similarity of name and the note that he had a gorget:

If ‘Old Cry’ is the same man as King John Cry, this gorget would be very old, dating from at least the 1820s. The deep crescent shape of the plate, which is very like that of military gorgets, as well as the early style of lettering and old-fashioned picture of the dingo also suggest an early date for the gorget. In his history of Goulburn, Ransome Wyatt noted that the gorget was discovered by Mr Cornwell Snr, in 1901, while ploughing a paddock near Tirranna Church. It was believed to have been buried for 60 or 70 years. [1] The find was reported in the Werriwa Times, 21 October 1901:

AN INTERESTING FIND ... On Sunday last Mr. W.J. Brown, of Mr. Tuttlebee’s shop, came across an interesting find in a ploughed paddock at Tirranna near the old church. It was brass plate, half-moon in shape with the following inscription on it, below a well-engraved figure of a man shooting at a kangaroo: ‘King John Cry, Chief of the Duedolgong tribe, Argyle’. The plate had evidently been worn by one of the Aboriginal chiefs of the district. There is no date on it, but an old resident of the locality stated that she remembers a chief of that name who lived about here some 60 years ago. It was buried about 10 inches from the surface, and had been turned over by the plough. It is supposed that there is an old grave at the spot. The plate is well preserved.