Jorrocks was arguably Australia’s first celebrity racehorse. The diminutive Anglo-Arabian began life as a stockhorse, but went on to achieve at least 65 wins from 95 starts. His last win, at age 18, made him the oldest winning racehorse in Australian history. 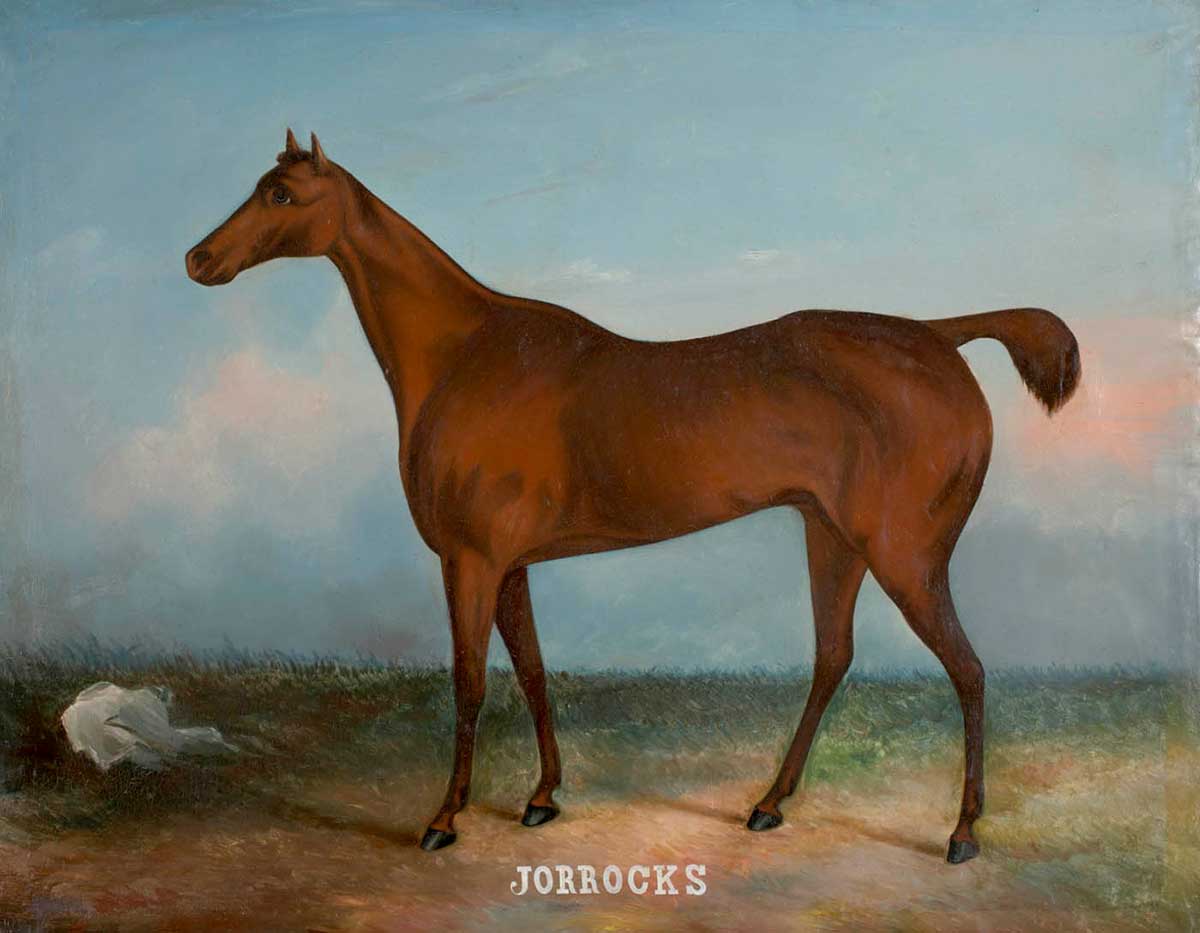 Oil on linen portrait of the racehorse Jorrocks by unknown artist

In the late 1840s and early 1850s images of Jorrocks circulated widely throughout the Australian colonies. The portrait in the Museum’s collection, purchased in 2013, was probably created by an amateur artist, though its history is largely unknown.

It appears the artist was inspired to copy a lithograph of Jorrocks by Edward Winstanley that appeared on the cover of New South Wales Sporting Magazine on 2 October 1848.

Jorrocks was foaled in 1833 at Bayly Park stud near Liverpool in New South Wales, later renamed Bayley Park, after the stud was moved to Mudgee. Jorrocks began his working life as a stock horse, until his owner, Henry Bayly, noted the horse’s stamina and strength and began racing him in local events.

Jorrocks started on the track as a five year old and, after winning a large number of low-level races, was entered in his first competition ‘in good company’ at Homebush in Sydney in 1841.

By this time, the horse’s original owner, Henry Bayly, had traded him to well-known trainer Richard Rouse for eight spring heifers, and Jorrocks passed through the hands of several other owners and trainers during his career. He also seems to have raced under a variety of names, including Jollox and Jollop. 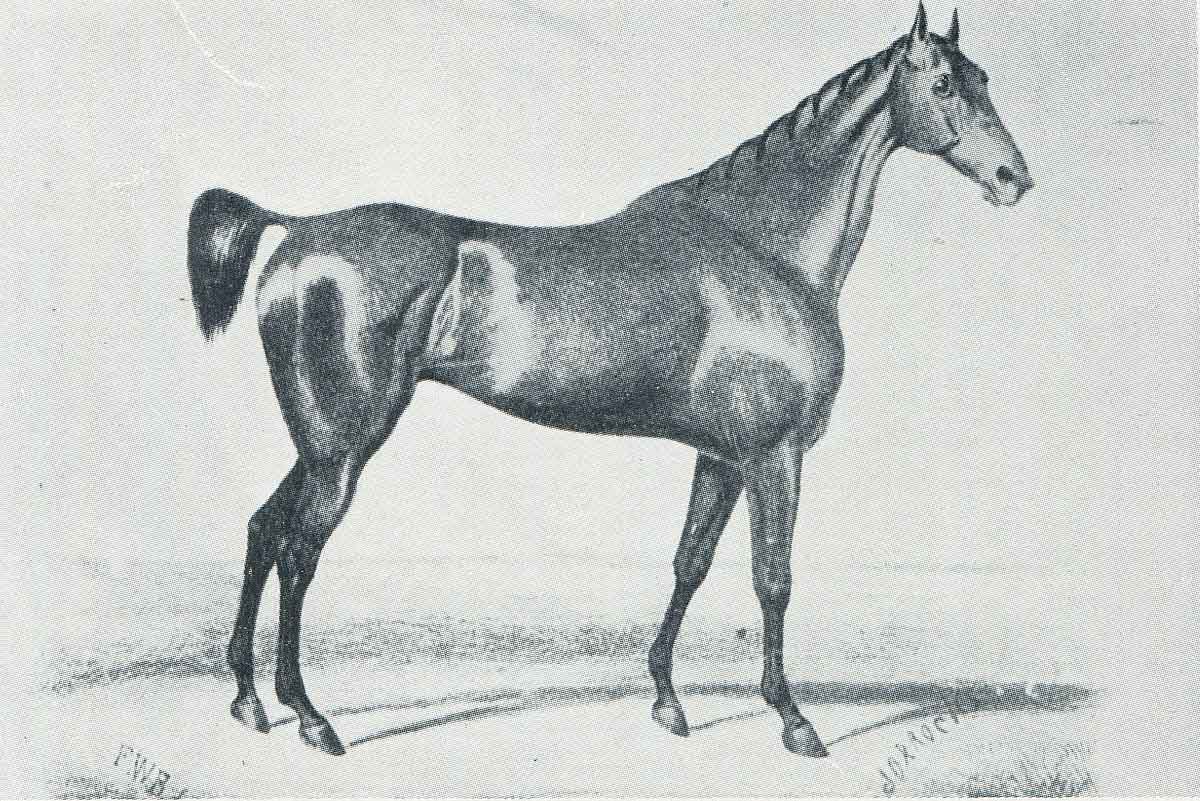 Despite his itinerant life and the fact that, like all racehorses of his time, he had to walk from his stable to his races, Jorrocks was a racing sensation. Inaccurate records mean it is unknown exactly how many races the horse won, but he achieved at least 65 wins from 95 starts.

In 1843, carrying over 60 kilograms, Jorrocks took out the Australian Jockey Club (AJC) Metropolitan Stakes, the Cumberland Plate and the Champion Cup. Three years later, in 1846, he won 30 of his 31 starts, carrying at least 57 kilograms and galloping a usual two or three miles each race.

A bay (brown-coloured with black points) Anglo-Arabian gelding, Jorrocks stood at 14 hands 2 inches high, relatively slight for a racehorse, even in the 19th century when horses were generally smaller than today.

A racing commentator for the Maitland Mercury and Hunter River General Advertiser recalled Jorrocks in 1892 as ‘strangely attractive’, noting also that he had ‘legs and arms like steel bars and muscular looking thighs, all the better to propel him towards a finish line’.

Jorrocks continued racing into the 1850s. He started nine times for four wins and five placings in 1850, but two years later trailed the field home in his last race. He was retired to Clifton Stud at Richmond and died in 1860 at the age of 27.

He is remembered as the 'Iron Gelding’ in recognition of his strength, endurance and longevity. His grave is marked by a memorial stone at the Royal Australian Air Force base at Richmond.

There seem to have been a large number of pictures of Jorrocks in circulation during his life and through to the early 20th century. Not all were works of art.

Winstanley’s 1848 lithograph of the horse was said to be quite a good representation and was completed with obvious technical skill. The Museum’s painting is less accomplished. It emphasises Jorrocks’ delicate head and wide hindquarters, arguably tending towards caricature. 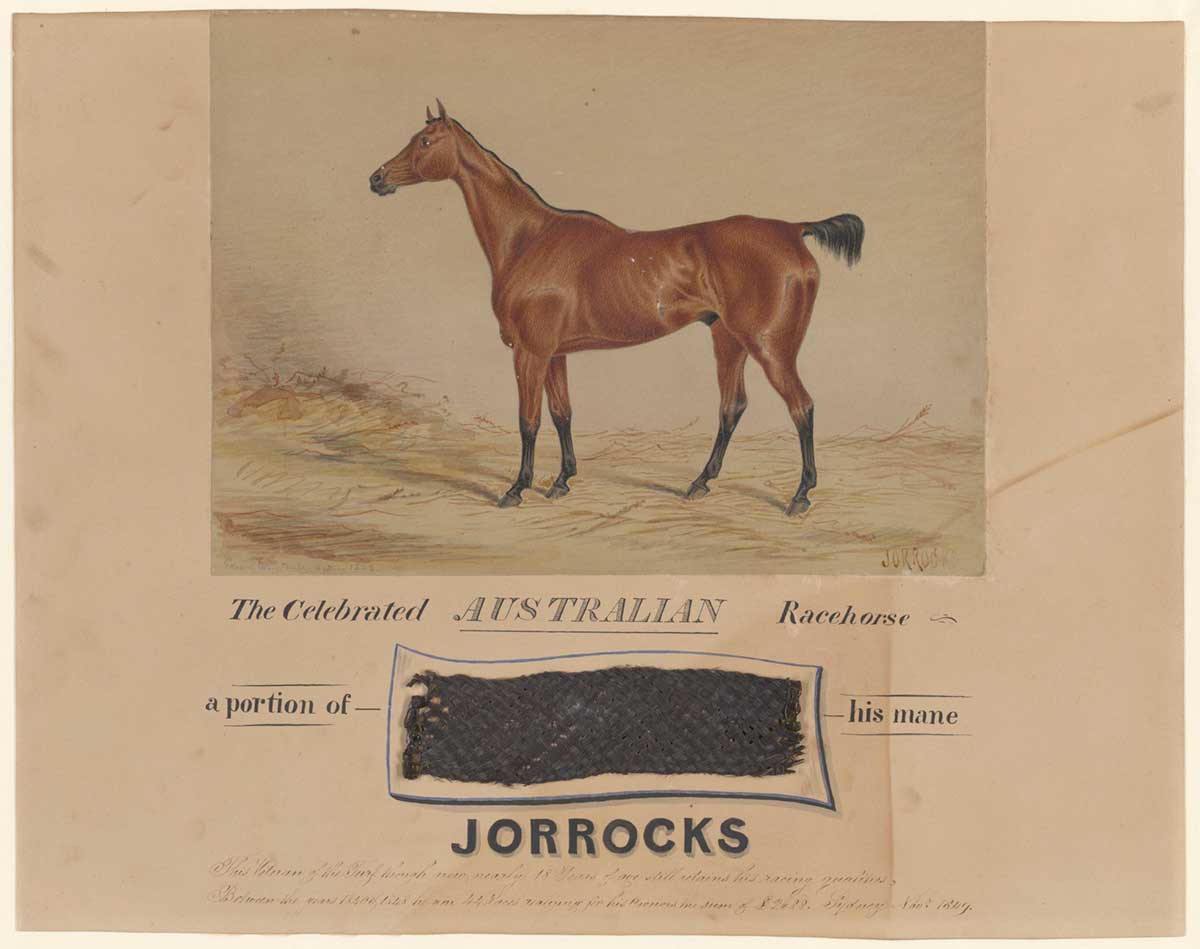 Apparently, many representations of Jorrocks failed to meet with his public’s approval. Johnny Higginson, a jockey who once rode the horse, stated in the Hawkesbury Herald Newspaper in 1904 that he was not pleased with many of the drawings he had seen of the horse because they made him ‘too stout’, when he ‘was a small, light horse’.

Higginson continued, ‘The only man I ever knew to paint a good picture of Jorrocks was Dr Bland’s nephew’, though he does not provide any further clues as to the identity of the nephew.

The Museum’s painting of Jorrocks might not accurately capture the horse’s appearance, but it is endearing. It conveys Australians’ attachment to the famous galloper, and it appears that racegoers’ affection and admiration for the horse endured long after his death.

Although today there are few well-known images of Jorrocks in circulation, newspaper reports indicate that paintings featuring him were used as prizes and incentives until the 1950s.

Jorrocks was descended from Australia’s oldest racehorse family, but he would not be allowed to compete in most races today because of his ancestry.

Like many of Australia’s early racehorses, Jorrocks’ maternal grand-dam, Vesta, was part, and probably at least half, Arabian.

Many colonial breeders looked to this breed to improve the quality of local bloodlines, and Vesta’s sire, Model, was an Arabian stallion brought to New South Wales by Sydney merchant William Browne.

Vesta’s dam was probably a half or three-quarter Arabian mare known as Cariboo, descended from an Arabian or Arabian-Persian stallion, Old Hector, which was imported to the colony by another Sydney merchant, Robert Campbell, in 1807.

The first thoroughbred horses arrived in Australia in 1799 and for several decades were regularly inter-bred with Arabian horses to develop faster and stronger racehorses. Vesta was joined with Steeltrap, probably a mostly Thoroughbred sire, and their daughter Matilda was bred to a thoroughbred sire called Whisker, to produce Jorrocks.

As a result, Jorrocks is now usually described as an Anglo-Arabian, a horse of mixed Arabian and Thoroughbred bloodlines. His small head and ears and dished face are characteristic of the Arabian breed.

Until the late 19th century, Arabian and part-Arabian horses competed alongside thoroughbreds and other mixed breeds in Australian races.

Jorrocks was not the only successful Anglo-Arabian. In 1871, for example, the half-Arabian gelding, Saladin, won the Australian Cup and Hotham Handicap and is claimed to have finished third in the Melbourne Cup (although the judges disputed his placing).

Some early Arabian and part-Arabian horses are today listed in the Australian Stud Book, the official register of Australian thoroughbreds.

By the early 1900s, however, Arabian racehorses were losing their distinct identity, as authorities moved to exclude mixed-breed horses from official races.

In 1912 the Stud Book Committee, comprising the Australian Jockey Club and the Victorian Racing Club, decided to include in the stud book only those horses whose ancestry could be traced to acknowledged thoroughbreds.

From 1932 the principal clubs in each state agreed to restrict their classic races to horses that had been entered or were eligible for inclusion in the stud book, effectively excluding non-thoroughbreds from the track.

Arabian horses returned to Australian racing in the 1980s, reflecting a global upsurge of interest in racing the breed.

Today, Arabian races are held on several tracks around the country, often as part of larger thoroughbred racing programs.

Some of the most recent high-profile Arabian races have included the Shadwell Stud Australasia Arabian Plates held on the Gold Coast in 2013 and the Australian leg of the international Sheika Fatima bint Mubarak Ladies World Championship held at the Melbourne Racing Club in February 2014.

Oil on linen portrait of the racehorse 'Jorrocks'An oil painting on linen, mounted on a fixed Baltic pine timber stretcher. The painting depicts a portrait of a chestnut coloured horse with a docked tail. The horse is standing in a rendered green and brown grassy landscape against a blue sky with pink tinted clouds. 'JORROCKS' is painted below the horse in white. Also featured...