Signed 'S. Thomson 1922', it shows 'Robert', about life-size, at 40 centimetres tall, clearly exhibiting the characteristics of his breed.

In 1902, at the age of 14, Thompson began exhibiting birds at shows near his home in Goulburn, New South Wales.

He served in India and on the Western Front with the 10th Hussars before establishing his poultry stud at Kilree, Goulburn in about 1920.

Thompson became a respected breeder, exhibitor, importer and judge of poultry, and many of today's Australian modern game bloodlines trace their heritage to Kilree.

In the Australasian Book of Poultry, AJ Compton described the modern game bird as having 'a most aristocratic appearance – reach, style and proportion, with the brightest and most lustrous plumage, forming a combination difficult to surpass'.

Bred from introduced Malay crosses, the modern game emerged in Britain during the mid-19th century, following the ban on cockfighting. The breed's long legs and 'snake head' signal its fighting origins, while broad shoulders, short wings and neatly held feathers became standards as the modern game was developed as an exhibition bird.

This quote is from an article in the Goulburn Evening Penny Post about Robert, published 1921. The portrait, now in the Museum's collection, was painted the following year and is framed together with eight prize medals, won by Thompson's fowls at competitions in Sydney, Melbourne and Goulburn between 1924 and 1948.

Robert was awarded the small medal in the centre for Best Bird in Show at the Old Goulburn Poultry, Pigeon and Canary Club's annual show of 1924, when Thompson's stud was dominating competitions across eastern Australia.

The painting was once part of a large collection of trophies proudly displayed in Thompson's home, before the Museum purchased it at auction in 2012. 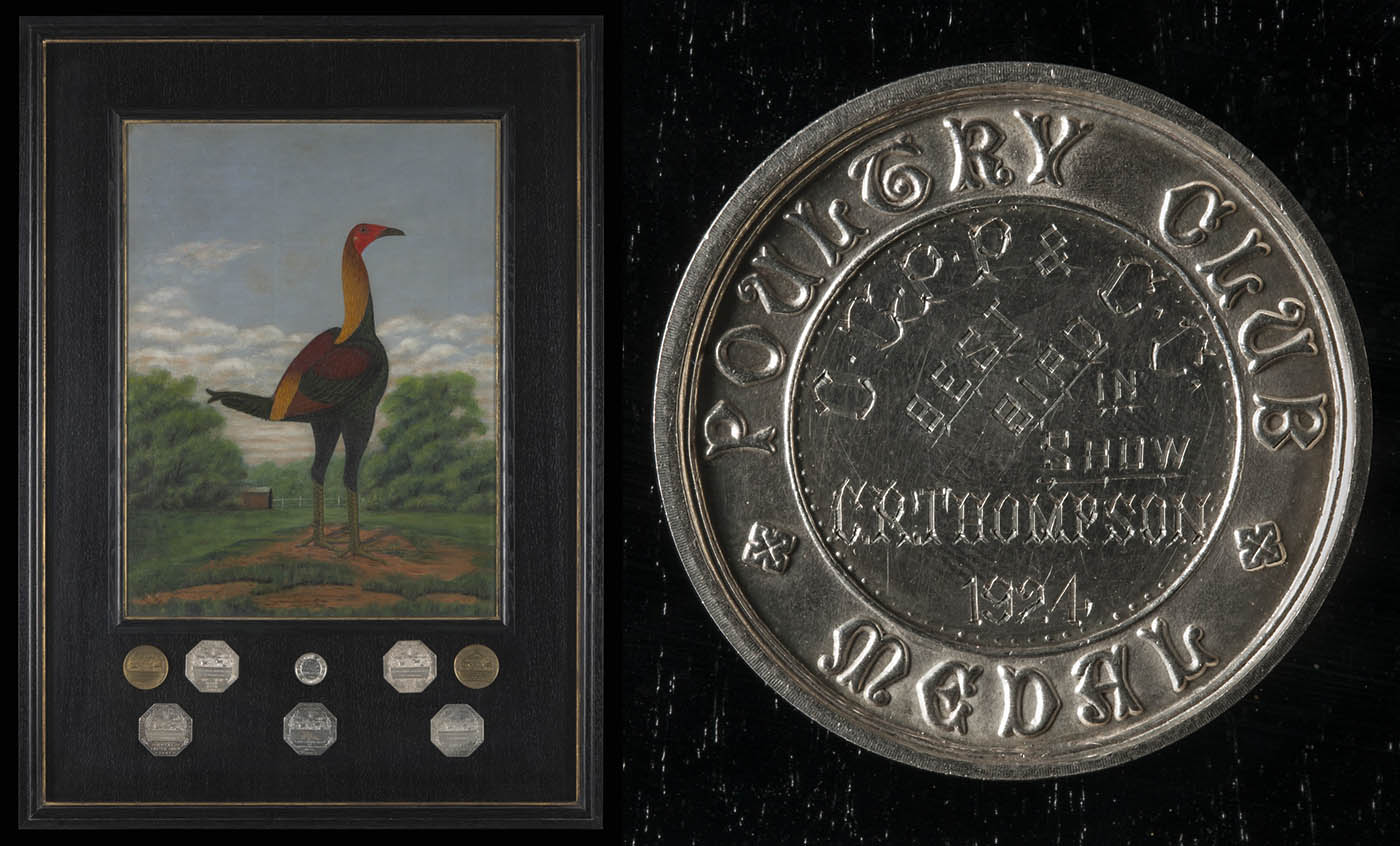 Painting of 'Robert' the bantam, with associated prize medalsAn oil painting featuring a hard feathered bantam rooster, standing in a rural setting with a barn and trees in the background. He has a red face and golden coloured neck with green, brown and black feathers on his wings and body. A signature in the bottom right corner reads 'S.Thomson / 1922'. In the left hand corner are the wo...