This windsuit was worn by Geoff Bartram, a member of the 1984 Australian Mt Everest Expedition. The climbers approached the mountain through China and Tibet and were the first to try the North Face 'Great Couloir' route.

They climbed lightweight style, without the back-up of a large team or supplementary oxygen. Two climbers, Tim Macartney-Snape and Greg Mortimer, reached the summit on 3 October 1984. 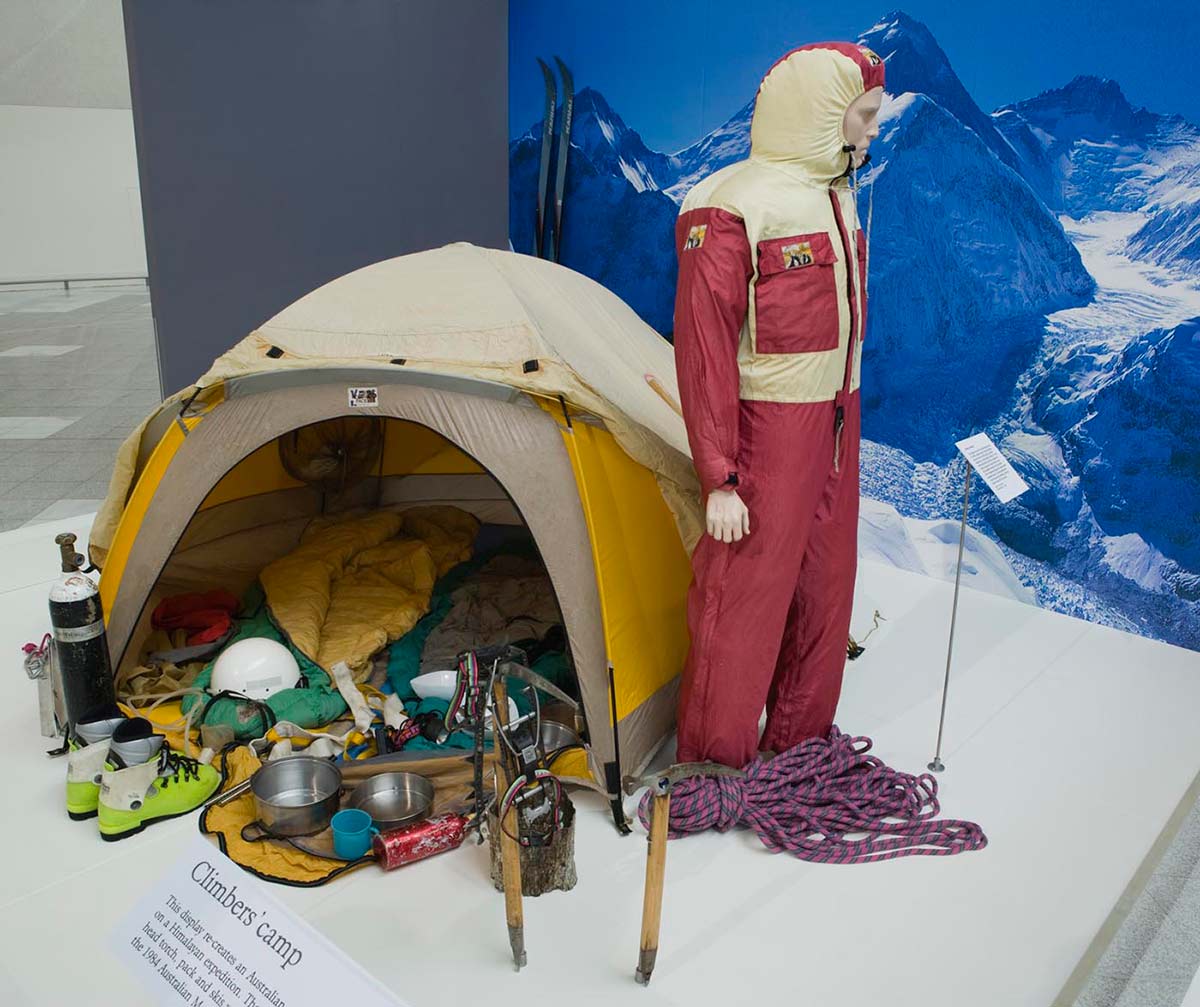 The Australians in the Himalayas: 25 years of achievement display at the Museum

The Australian Mount Everest Expedition team made headlines around the world. They were the first Australians to reach Everest's summit, and by a new route.

Everest historian Walt Unsworth called the feat 'one of the greatest climbs ever done on the mountain'. Geoff Bartram, Lincoln Hall and Andy Henderson did not reach the summit at 8848 metres, though they all climbed to various heights on the mountain.

The windsuit was worn over Bartram's other clothing to help break the wind. He climbed to 7400m elevation before illness caused him to descend.

After he recovered, Bartram was able to help expedition members off the mountain after the successful ascent by Macartney-Snape and Mortimer. All the climbers survived the expedition.

Today Bartram is a fireman in Canberra and lives on a rural property just outside the Australian Capital Territory.

On the 25th anniversary of the expedition in 2009, Bartram told ABC TV's Stateline program that he was disappointed not to make the summit:

I mean, any time you go to a mountain and don't climb to the top, I guess there's a regret. But, I mean, I knew that at the time that I turned around there was no other choice. Firstly, I couldn't have gone on, it was too debilitating. But had I gone on, I wouldn't have been talking to you now. I would've certainly died. Had I gone on, I would have made everyone else come down and rescue me off the face. So for me, personally, there are disappointments I suppose rather than regrets.

Despite the fact that Australia is one of the world's flattest continents, Australians have a proud record of achievement on the highest mountains of the planet.

With the success of Andrew Lock on Shishapangma, Tibet, on 2 October 2009, Australians have now climbed all 14 of the world's 8000m-plus peaks. Very few mountaineers around the world have done this.

Australians have also made many first ascents and have climbed in other mountain regions of the world. Geoff Bartram climbed extensively in the Andes as well as the Himalayas and elsewhere. But success has not been without cost. Sadly, 15 Australian climbers have died in the Himalayas since 1972.

Australian climbers do more than climb. They and others established the Australian Himalayan Foundation in 2002.

In this way Australians are making a positive contribution to the well-being of the Himalayan people.

Australians in the Himalayas

Mountaineering one-piece outer suit worn by Geoff Bartram, one of five members of the first all-Australian climb of Mt Everes...Mountaineering one-piece outer suit with hood made from Gore-tex material in red and yellow. Logos and brand name visible in several places, including brand logos on upper arms and chest, featuring Channel 9 logo "WIDE WORLD / OF SPORTS/ everest '84" in yellow, proper left of chest.