Guna Kinne (née Klassons) made this Latvian national dress over a period of 30 years. She started the dress as a schoolgirl in Riga and finished the jacket as she fled Latvia at the end of the Second World War.

Guna wore the completed dress for the first time in a displaced persons camp in Germany and added the final touches after she migrated to Australia.

Guna Klassons grew up in Riga, the capital of Latvia. The national dress started as her high school sewing project in 1942.

Guna chose a dress from the Nîca region, from a pattern book given to her by her father. He also gave her material for the jacket and skirt and a ready-made 'crown' for her 16th birthday.

The red felt crown, with beading and metallic braiding, was the appropriate head cover for an unmarried woman.

'It was the dream of any Latvian woman, especially a young girl, to own a national dress. It was very complicated to make and costly to buy,' she told the Museum in 1989.

Latvia is a northern European country on the edge of the Baltic Sea. It emerged as a modern nation-state during the 19th century and declared independence from the Russian Empire in November 1918.

Cultural nationalism followed independence. The Latvian Government introduced programs to develop its citizens' knowledge and appreciation of their national heritage.

In June 1940 Latvia was drawn into the Second World War as troops of the Soviet Union occupied the country.

German forces of the Third Reich replaced occupying troops a year later, but were expelled again by Soviet forces over 1944 and 1945.

By the end of the war one-third of Latvia's population had disappeared – dead from starvation, executed, deported or having fled across Europe.

Faced with such wide scale cultural destruction, Mrs Kinne explained the growing signficance of her dress:

The 'keeping alive' of the national heritage seemed to assure that our nation was important enough to have a place among other nations. In this light, the Latvian national dress became very important, and to own and wear one showed the owner's pride in our small, insignificant and struggling nation. It became the custom to wear the national dress at any important national function but also as an alternative to an evening dress.

In occupied Riga, Guna continued to work on her national dress. She drew the shapes for her jacket directly onto the fabric with a pencil, since no paper pattern transfers were available.

Guna fled Latvia for Germany with her mother and sister, in the face of the second Soviet invasion in late 1945. She left with some clothes, photographs and her unfinished national dress.

It was in the suitcase when I ran to catch the last Red Cross train carrying wounded Latvian soldiers from Gdansk to Berlin. Neither the suitcase nor the dress was harmed in the Berlin bombardments, and later I took it to Parchim, in Mecklenburg. There, desperate to find my family, always short of food, fearing deportation back to Latvia, obtaining false documentation, forced to find new lodgings because of a Russian officer's rape attempt, I finished the jacket.

Guna was one of 20 million people displaced from their homes by the trauma of the Second World War.

She was one of the thousands of refugees who were housed in displaced persons camps in Germany. At Geestacht camp, she finished her national costume.

'I wore the dress with great pride for the first time at a camp dance in December 1945 and met my future husband on that day,' she said.

Guna Klassons married Arturs Kinne on 3 July 1946 in Germany. The Kinnes, fearing persecution by the Soviet government if they returned to Latvia, chose to migrate to Australia.

Guna carried her national dress to her new home in Wangaratta in Victoria in 1948.

Guna consulted her pattern book in Australia in 1957 and added the black taffeta bonnet to her national dress. In Latvian tradition, once a woman was married she exchanged her crown for a more sober head cloth or bonnet.

Guna also added a brooch and necklace. She won the silver brooch with inlaid amber stone, used to secure the collar of her blouse, in a lottery at a Latvian church bazaar. Her husband's sister sent her, from Latvia, the necklace of polished, natural amber.

In September 1959 Guna was invited by a Good Neighbour Council to join other 'new Australians' in greeting Princess Alexandra of Kent when she visited Wangaratta.

How did I feel when I wore my Latvian dress? Well, in a way I was proud to show off the dress, because it was unusual, being red and all. But otherwise the reception was rather boring ... it was standing around for hours and waiting and waiting and then – in two minutes the princess drove past ... 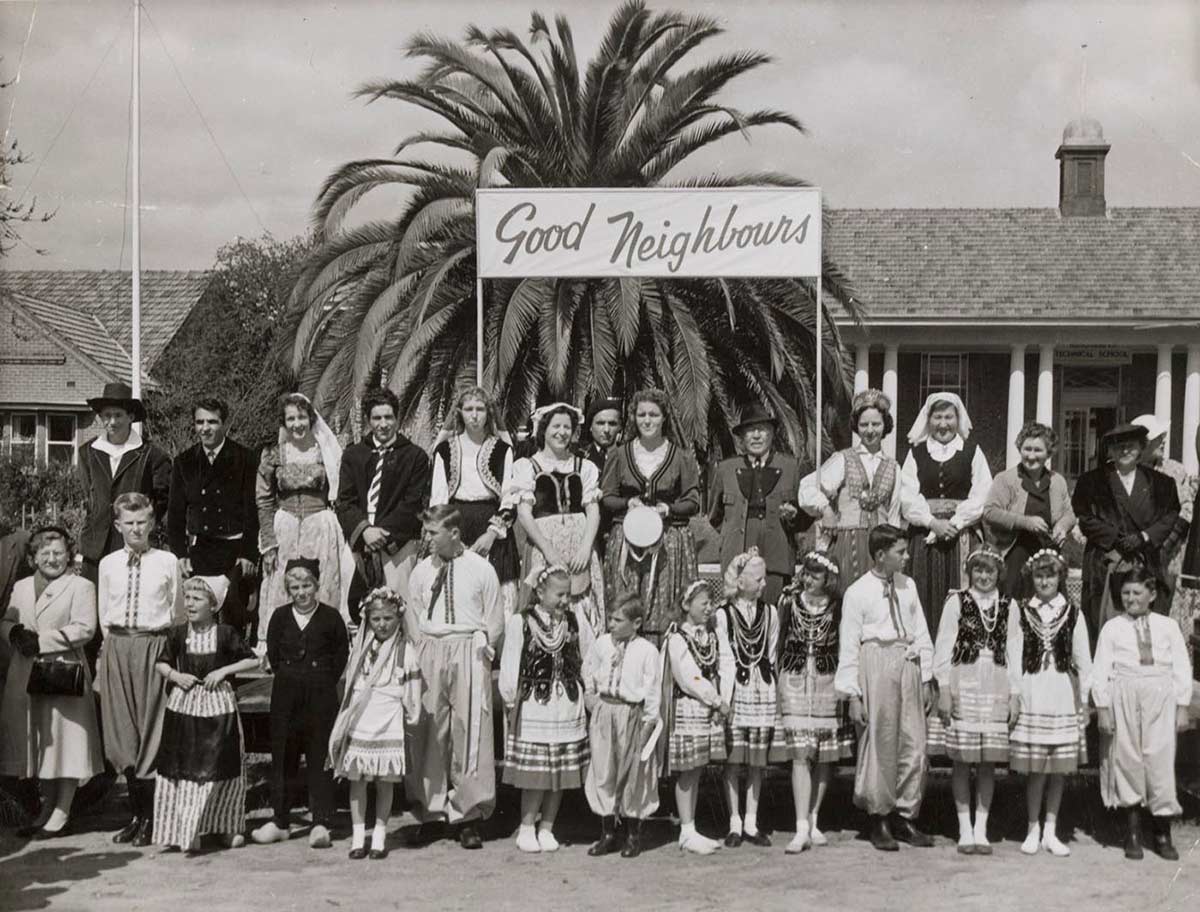 Guna Kinne, second row, fifth from right, was invited by a Good Neighbour Council to join other 'new Australians' in greeting Princess Alexandra of Kent when she visited Wangaratta in 1959

In Australia Guna worked as a dressmaker and as an artist, adding colour to black and white horse racing photographs.

The Kinnes moved from Wangaratta to Melbourne when their children were old enough to study at university.

Guna also enrolled at university, at age 49, and graduated with honors. She worked as an archivist for 30 years.

At a work conference Guna discussed the future of her national dress with some colleagues. She had sons, but no daughter, and eventually donated the outfit to the National Museum of Australia in 1989.