The đàn tre is a bamboo instrument handcrafted by Vietnamese refugee Minh Tam Nguyen. Inspired by European and Asian musical traditions, the đàn tre was created in a refugee camp in the Philippines after Nguyen fled Vietnam.

The instrument accompanied Nguyen when he moved to Australia in 1982 and helps to tell a strong emotional tale of a meeting of traditions and a life changed by war. 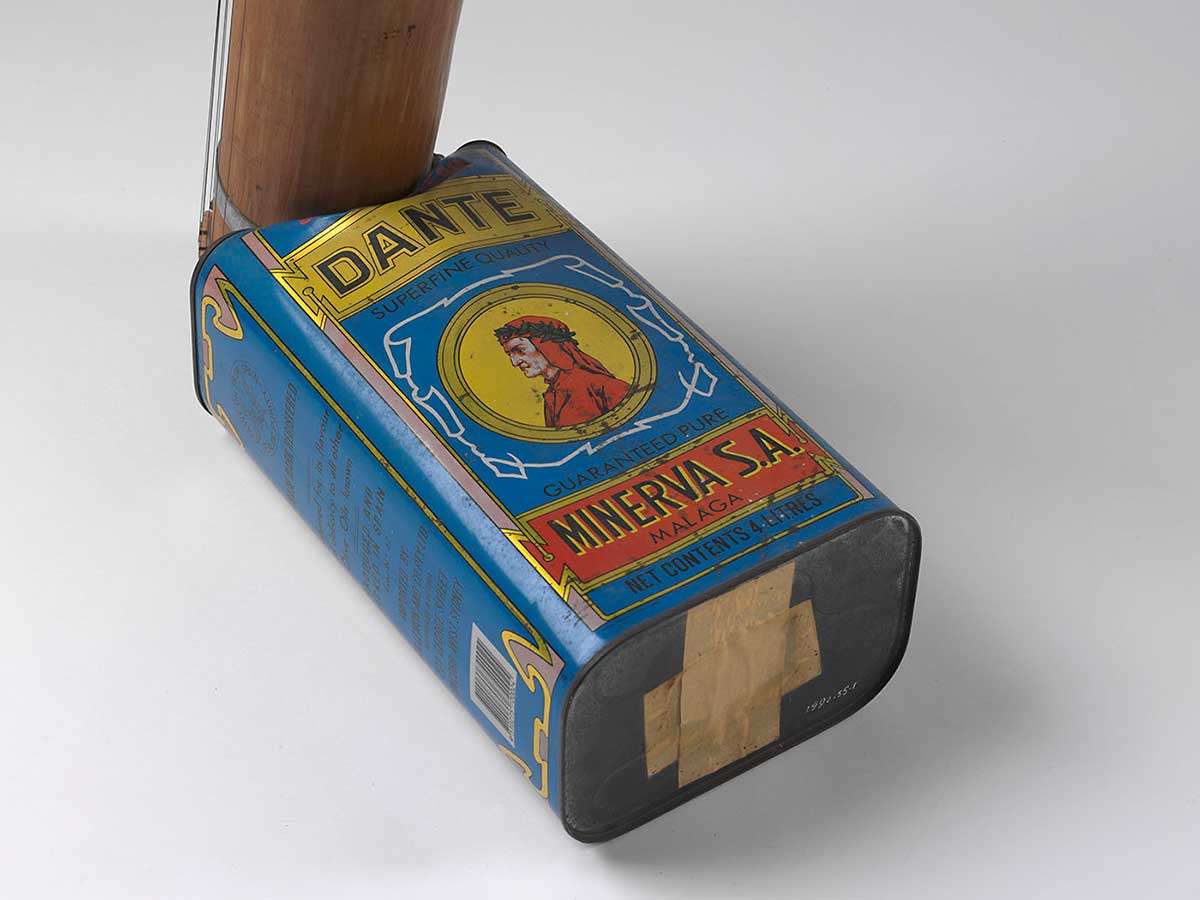 Nguyen's 23-string đàn tre, which translates to 'bamboo musical instrument', stands less than a metre high. It features 23 wire strings attached to a bamboo tube, with an old olive oil tin as a resonator at the base.

It is based on an instrument he invented in 1976 while a prisoner-of-war in the 're-education' camps of the People's Liberation Armed Forces, or Vietcong, in central Vietnam.

The đàn tre can play both Asian and European music. It combines features from Vietnamese bamboo zithers and Western instruments like the guitar.

Nguyen brought the đàn tre with him when he and his son came to Australia in 1982. Playing it connected him to the family he had been forced to leave behind in Vietnam.

Minh Tam Nguyen was born in Binh Dinh Province of central Vietnam on 25 November 1947. As a teenager, he studied music while training to be a priest with the Redemptorist Order, but left due to poor health.

In 1968 and with his country at war, Nguyen enlisted in the Army of the Republic of Vietnam, or the South Vietnamese Army.

Nguyen was captured in Phubon jungle while fighting against the Vietcong on 20 March 1975. It is a day he will never forget. He remembers how his shoes were removed and his hands and feet were bound. It was the start of six years hard labour in the 're-education' camps of central Vietnam.

Nguyen made the first đàn tre in these camps from recycled materials, even teaching a fellow prisoner to play the stringed instrument.

After his release in 1981 Nguyen fled with his nine-year-old son, Anton, to the Philippines by boat. They had little to eat on the journey and the boat almost sank twice during strong storms.

On their arrival the pair was placed in a refugee camp on Palawan Island. Nguyen worked as an information officer in the camp, where he made a second đàn tre, which is now part of the Museum's National Historical Collection.

After 17 months in the refugee camp, Nguyen and his son came to Australia. They were among 150,000 Vietnamese refugees to settle in Australia since the fall of South Vietnam to communist forces.

Nguyen's earlier musical training was on the classical acoustic guitar. He bought a guitar from a shop in Parramatta, Sydney, in 1983, soon after his arrival in Australia. Keen to pass on his musical knowledge, he taught Anton to play the guitar.

Playing the đàn tre helped Nguyen cope with loneliness in Australia and he began to perform in public. In 1984 Nguyen played the instrument at a conference of the Ethnic Communities Council of Queensland.

He told his story in Vietnamese and English, and showed how the instrument he invented could be used to play Vietnamese folk music, European classical music and Australian popular songs.

In 1990 Nguyen's mother, wife, and three other children finally made it to Australia. Reunited with his family, Nguyen finally felt able to part with the đàn tre. He donated it to the National Museum of Australia.

Keys: The original keys were made from bamboo, the material used to hold and tune the strings of traditional Vietnamese instruments. Because they tended to slip, Nguyen replaced them with Australian-made screw assemblies, leaving extra holes behind as each bamboo key required two holes and each screw only one.

Strings: Nguyen made the strings of the first đàn tre from wire unravelled from the inside of a United States army telephone cable. The second instrument had strings made from electrical wire found in the Palawan refugee camp. In Australia Nguyen put guitar strings on the instrument.

To enable the instrument to play Vietnamese and European music, Nguyen experimented with different numbers and combinations of strings. The đàn tre evolved from 18 to 21 and finally to 23 strings, which are arranged in six groups in the C major scale. Each string is tuned to a single note.

Bamboo tube: Strong, hollow bamboo is commonly used to make musical instruments throughout Asia. There were large groves of bamboo near the Palawan camp in the Philippines. Nguyen used bamboo to build houses as well as his đàn tre.

Metal bands: Nguyen used metal bands to reinforce and strengthen the bamboo tube in Australia. They have 'Made in Australia' stamped on them.

Olive oil tin: Many Vietnamese instruments incorporate gourds to magnify their sound. Nguyen used an olive oil tin as a resonator, amplifying the sound travelling down the bamboo tube. The current Dante brand oil tin was added in Australia.

An original bamboo musical instrument made by Minh Tam Nguyen, a Vietnamese refugee to Australia, illustrates a meeting of European and Asian traditions and a life changed by war, explains curator Jennifer Wilson.
Open player in a new tab
Presenters: Jennifer Wilson
Tags:
00:00 / 20:54

Bamboo hybrid stringed musical instrument called a 'dan tre', an original creation by Vietnamese refugee Minh Tam NguyenBamboo hybrid musical instrument called a 'dan tre'. The instrument has twenty-three 800mm-long wire strings attached to a bamboo tube. An Australian-made metal hose-clamp is around the top rim. An Australian 'DANTE' brand rectangular four-litre olive oil tin, which acts as a resonator, is strapped to the base of the tube with t...