The iconic items the Djang'kawu brought to Yalangbara are also significant.

The feathered ornaments, conical mat, basket and digging stick were no ordinary items. They transformed into features in the land or are associated with other aspects of the Djang'kawu's creativity at Yalangbara.

These seemingly ordinary items are just like clan paintings in the way they symbolise clan identity, the land and its ancestral events.

The conical mat resembles a large wide-mouthed basket that made an ideal shelter for children, or for women's seclusion during menstruation. Customarily the conical mat would be folded flat into a triangular shape and suspended in front of a woman's body for modesty. It was also worn like this during pregnancy.

This connection to ordinary women's reproductive cycles reflects the mat's deeper religious significance as a metaphoric 'container of life' that is reflected by the Yolngu-matha term nganmarra, which also translates as 'womb'. 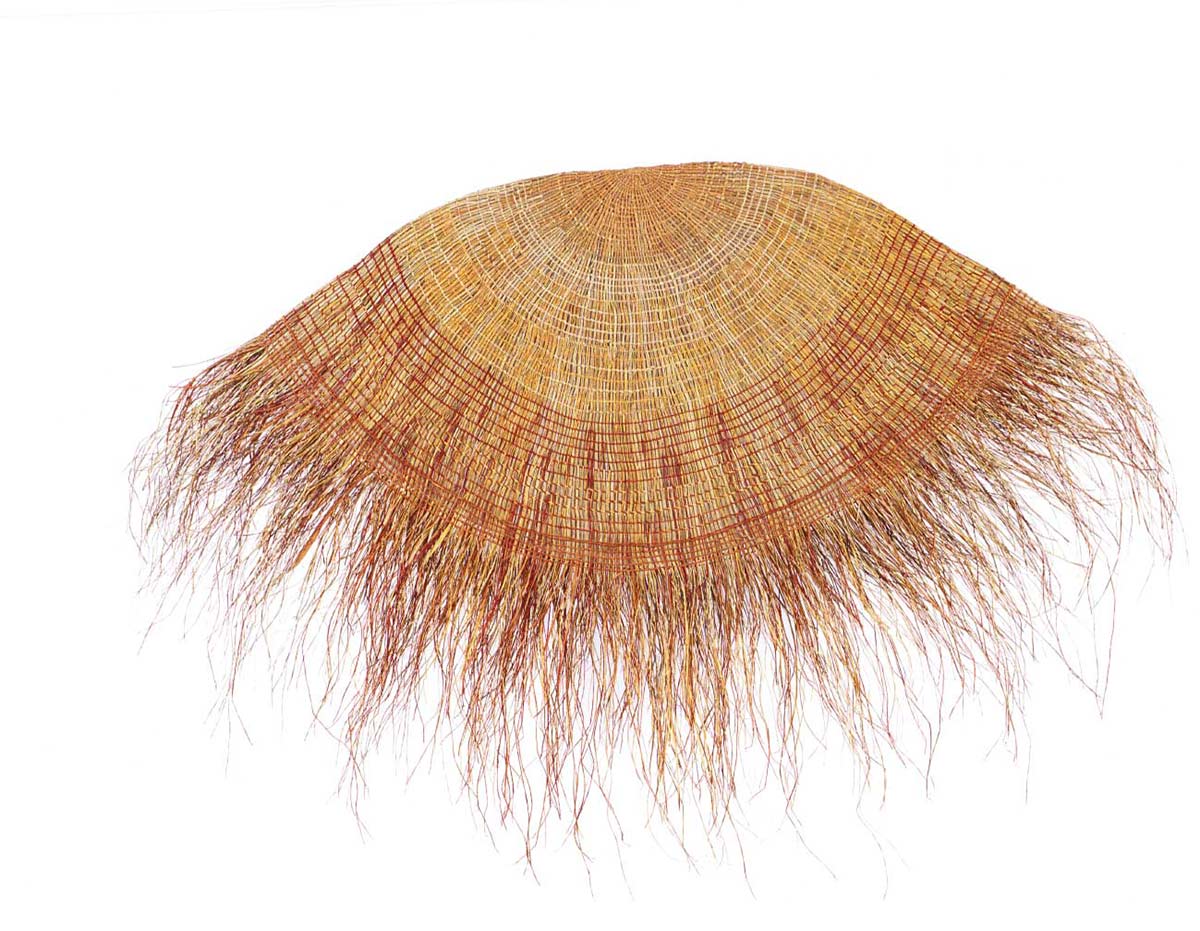 This deeper meaning is reflected in the way the Djang'kawu used their conical mats to hide their mardayin, sacred objects and the spirits of the children and other creatures that they distributed during their overland journey.

In this context the metaphoric act of 'opening the mat' symbolises birth. This is enacted during Ngarra rituals when women emerge from under the mats to represent the birth of the Dhuwa moiety children. The use of the mat in ritual as well as in everyday life further emphasises its association with the fertility of both the Djang'kawu and ordinary Yolngu women.

The sisters also brought their ceremonial baskets to Yalangbara and today these are one of the men's most prized possessions, worn during rituals as well as for important public and civic occasions.

The women make the baskets, but the string made from the orange breast feathers of the rainbow lorikeet is only made by the men. The baskets are regarded as containers of sacred law because they originally carried the sisters' sacred objects. 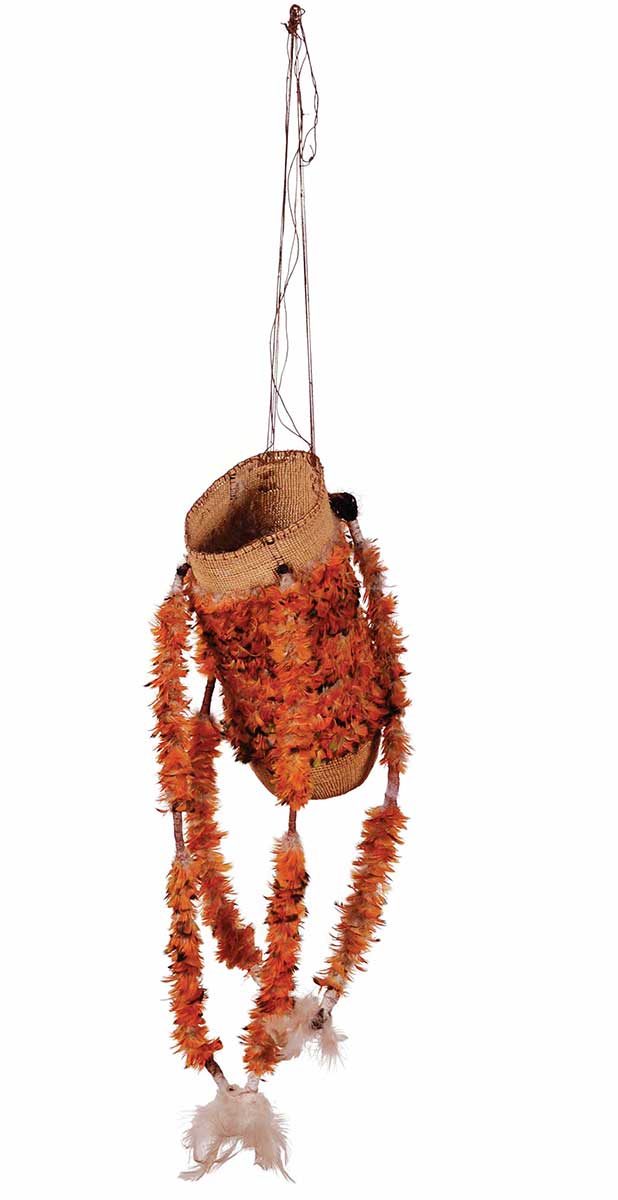 When people dance or [the ceremonial basket] is brought out for other reasons, we only see the outside of the dilly bag, but it carries an 'inside' story, it is just the same. Our law that it carries and the stories. The sacred dilly carries them just like the Bible.

Later on in their travels across north-east Arnhem Land the men stole the sisters' baskets and women effectively lost control over sacred law. As the present day custodians of ceremonial law, the men often describe the basket as the embodiment of their authority and land ownership.

All the Dhuwa clans decorate their baskets with the lorikeet's distinctive orange feathers to emphasise their common ancestral and ceremonial links. Although each clan's baskets are quite distinctive. For example there are two Rirratjingu baskets that symbolise the family interests in the western and eastern sides of Yalangbara respectively.

Both baskets have four tassels, however those on the western side basket are divided halfway along by a small length of beeswax-coated string representing the rocks at Gumararranga. The tassels on the eastern side basket are continuous feathered cords that symbolise the sacred high sand dunes at Yalangbara. The interspersed green feathers represent the casuarina trees on the beach there.

Another powerful item that the Djang'kawu brought to Yalangbara was the ceremonial digging stick, mawalan (also wapitja and djota), used to create freshwater holes on their travels.

The term mawalan can refer to either a digging stick or a paddle, because the oars were used by the Djang'kawu during their sea voyage to Yalangbara to create freshwater pools at various places in the sea.

Once on land, the sisters continued to create freshwater wells by plunging their mawalan into the previously barren earth. They did this in each of the Dhuwa clan countries they visited, leaving their mawalan as a symbol of their creativity and authority. The water that it created is likened to 'the fluid or source of Yolngu knowledge'.

To emphasise its embodiment of ritual knowledge and land ownership, the senior Rirratjingu men presented a ceremonial mawalan to the Australian government during the Gove land rights case.

They believed that the digging stick piercing the ground to create Djang'kawu law and knowledge was like the parliamentary rod opening the doors of parliament. Both staffs in this context symbolise the gaining of entry to culturally different, though equivalent, systems of power.

The exhibited digging stick normally displayed in Parliament House next to the famous Yirrkala Bark Petition was generously loaned for the Yalangbara: Art of the Djang’kawu exhibition. 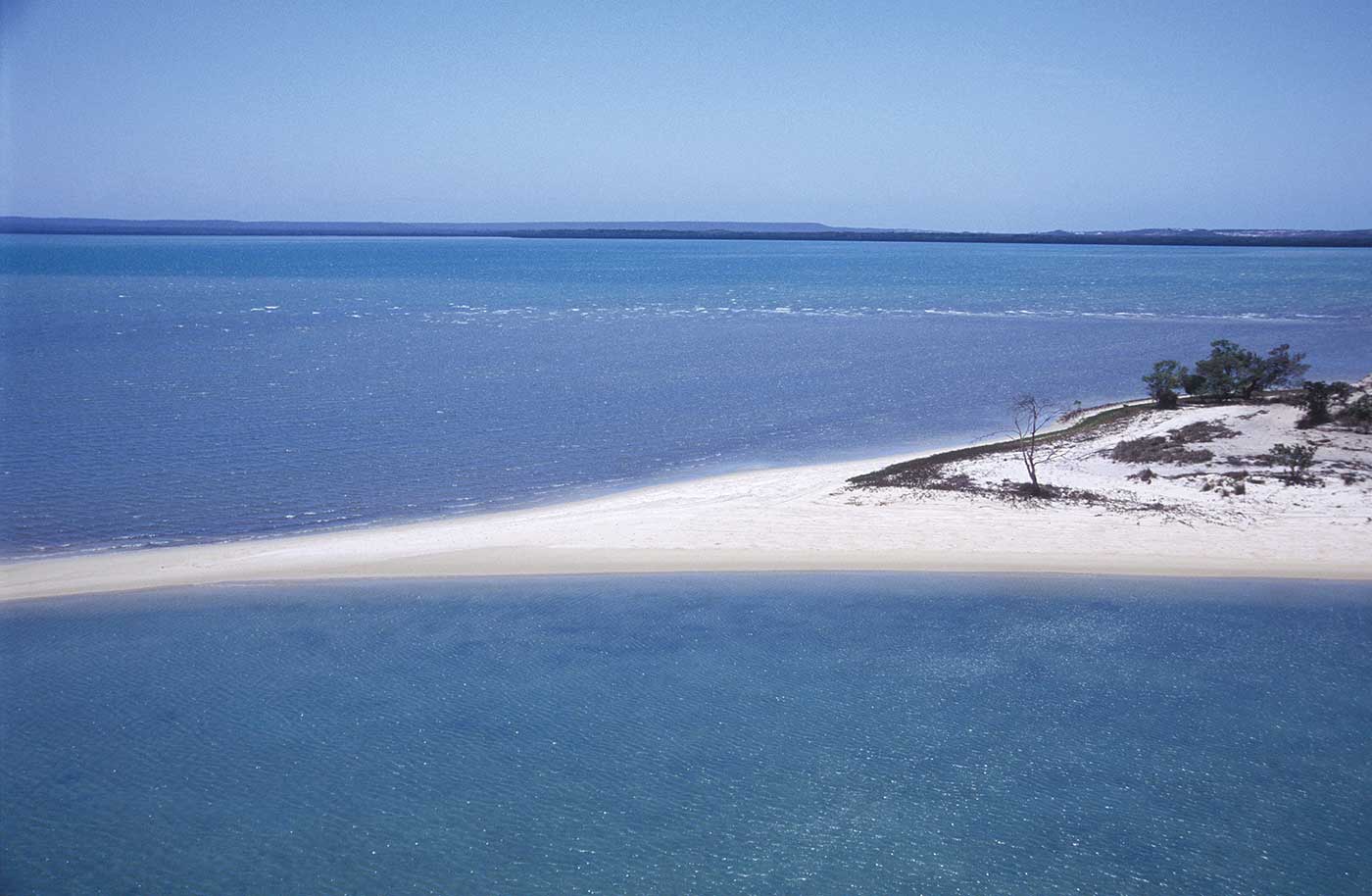