This timeline includes events of national importance in the life of Australia’s First Nations people after the 1967 Referendum paved the way for the adminstration of Indigenous affairs becoming the responsibility of the federal government.

1967: Referendum: Administration of Aboriginal affairs becomes the responsibility of the federal government. 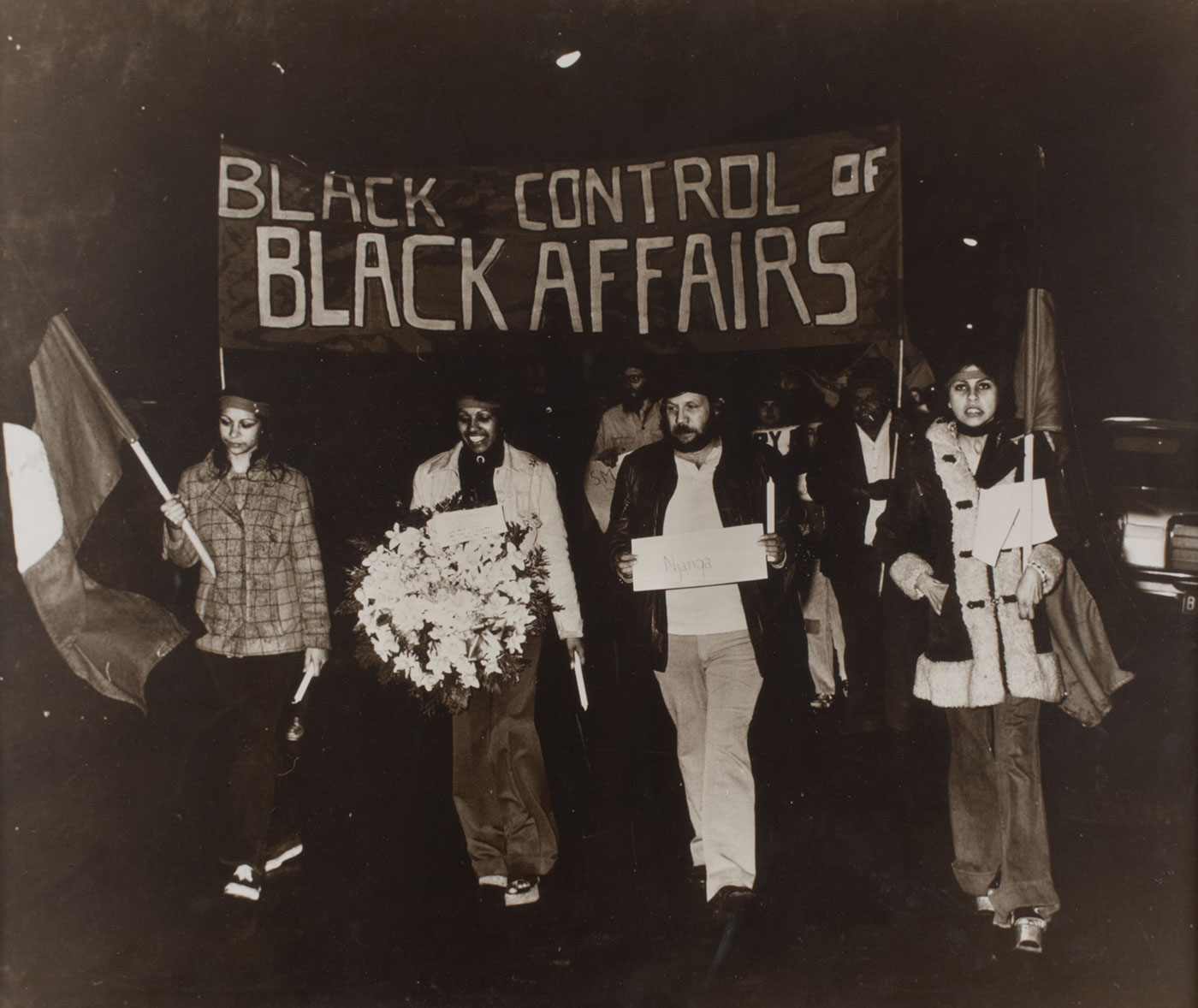 Protesting for self determination
1970s

1973: The Aboriginal Arts Board is set up to raise awareness of contemporary Aboriginal and Torres Strait Islander arts.

1974: The Aboriginal Land Fund Act is passed to help in purchasing land. 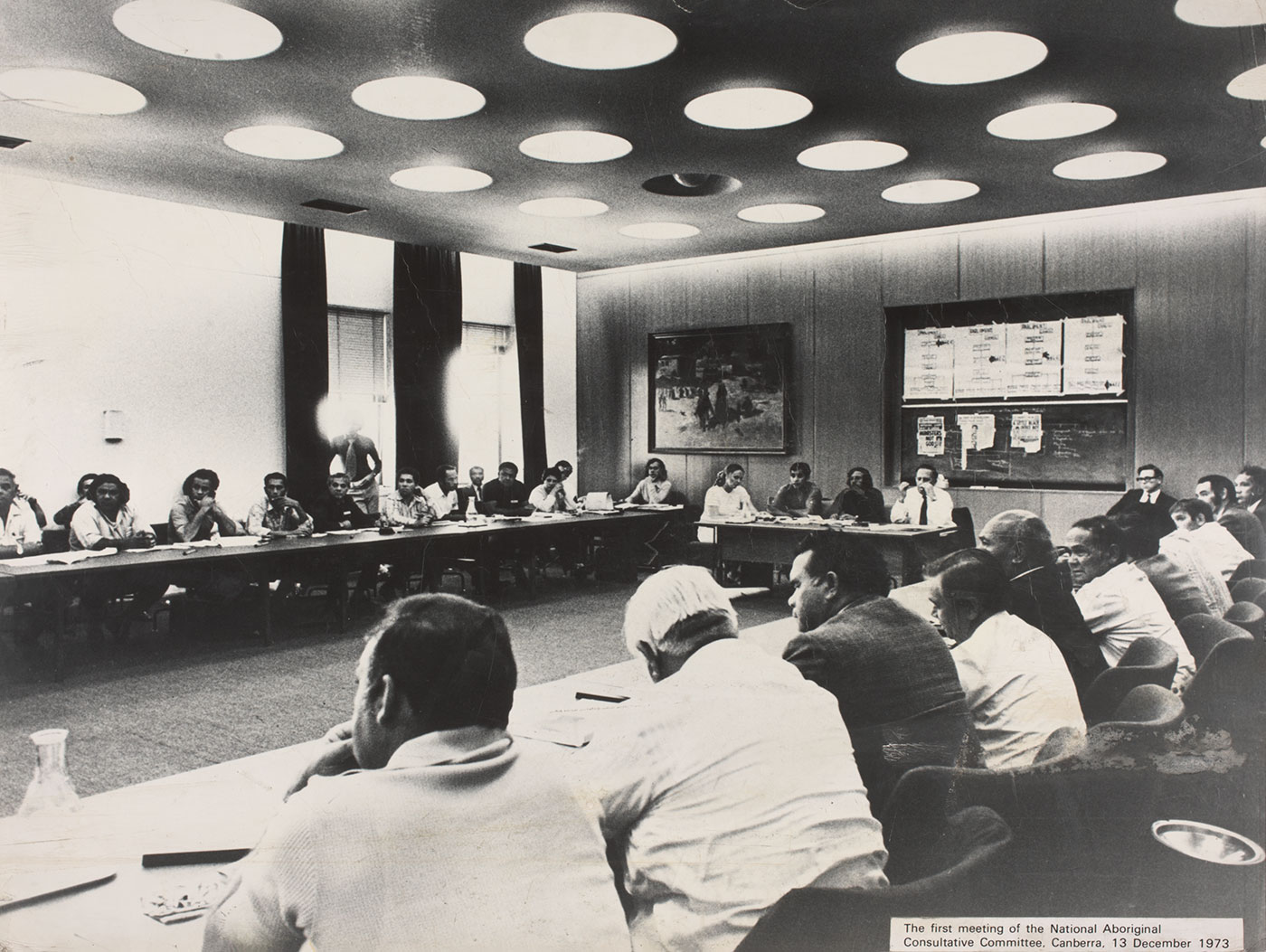 1976: The Aboriginal Land Rights (Northern Territory) Act is passed, the first attempt by the Australian Government to legally recognise the Aboriginal system of land ownership.

1978: The Northern Territory passes the Aboriginal Sacred Sites Bill, leading to the establishment of a permanent authority for the protection of sacred sites. 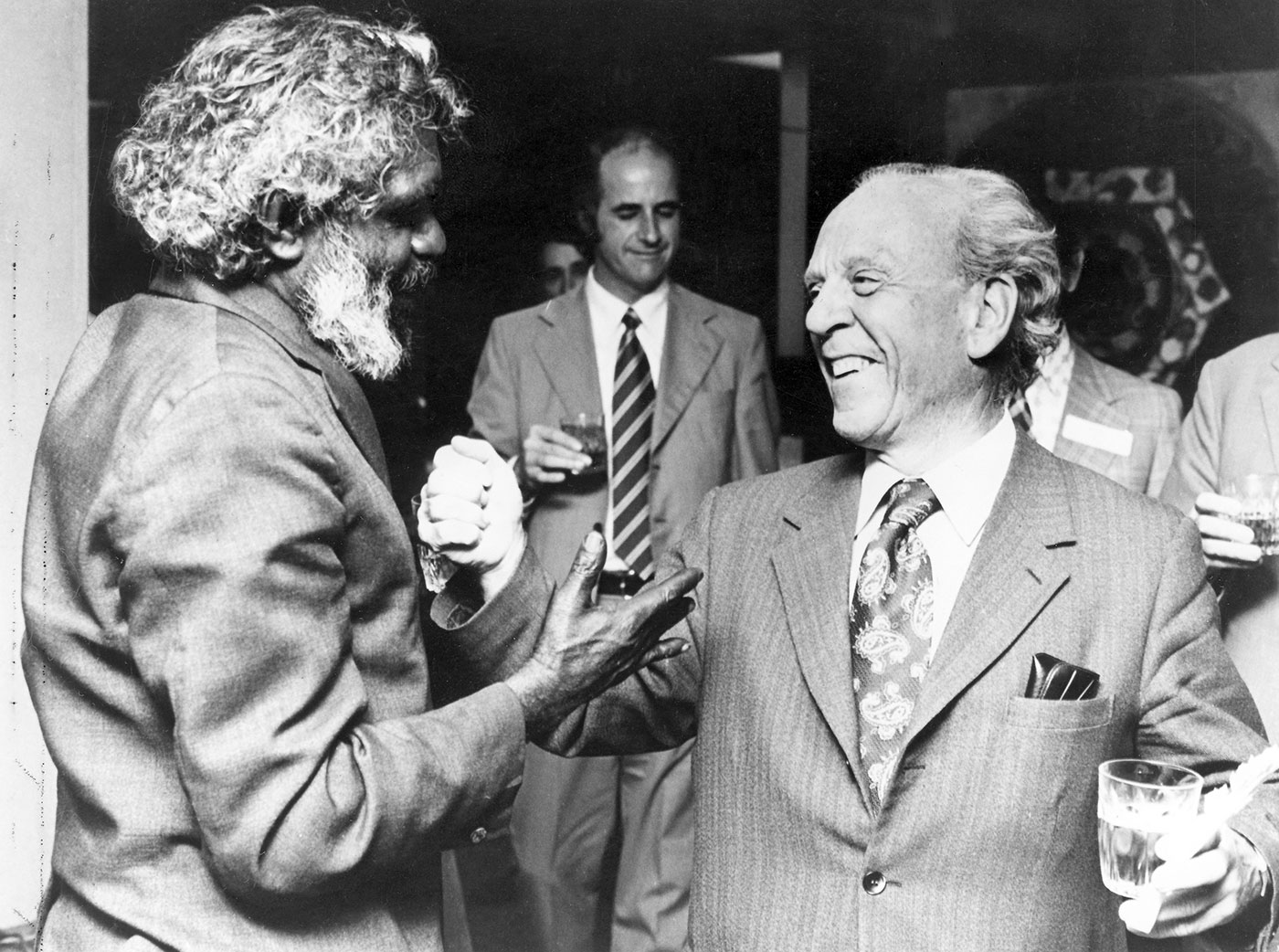 1980: The Aboriginal Development Commission replaces the Aboriginal Land Fund, to promote development, self-management and self-sufficiency. Arrernte and Kalkadoon man Charles Perkins, senior bureaucrat and campaigner for Aboriginal rights, is appointed the first chairperson of the 10-member board. More on Charles Perkins

1980: At Nookanbah, the Western Australia Government drills for oil near sacred sites.

1984: Charles Perkins is appointed to the highest government position held by an Aboriginal person: Secretary of the Department of Aboriginal Affairs.

1985: Ayers Rock/Uluru is handed back to traditional owners and is subsequently leased back to the government as the Uluru-Kata Tjuta National Park.

1988: Survival Day is marked by Aboriginal people while mainstream Australian society celebrate the bicentenary of the arrival of the First Fleet on 26 January.

1991: The Council for Aboriginal Reconciliation is established.

1991: The report of the Royal Commission into Aboriginal Deaths in Custody is published.

1992: 'Terra nullius' – the doctrine that Australia was 'no man's land' – is overturned by the High Court, because of the Mabo land rights case. 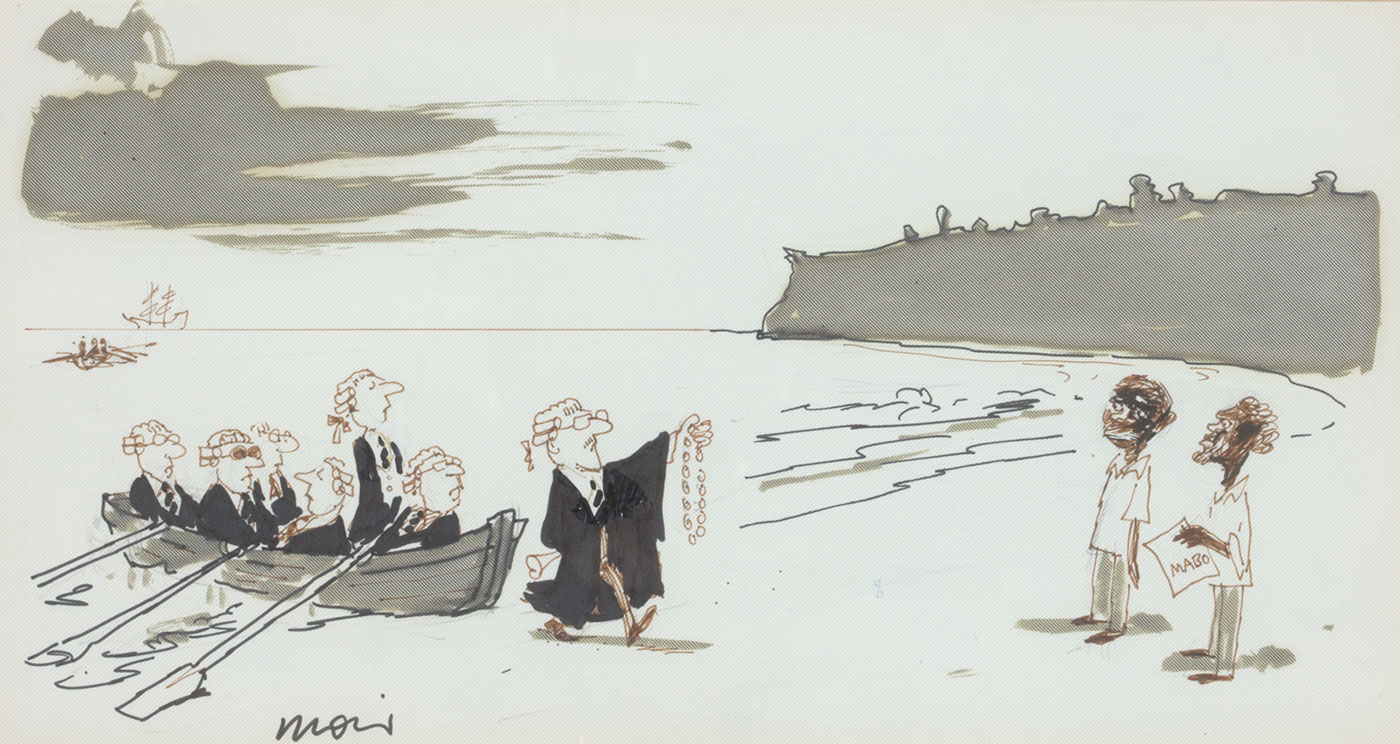 1996: Wik people are successful in a High Court case to establish that native title and pastoral leases could co-exist.

1997: Bringing Them Home is published, revealing the firsthand stories of children taken from their families.

1998: The Australian Government suspends the Racial Discrimination Act as part of a 'ten point plan' to modify/limit the Native Title Act.

1998: The first national 'Sorry Day' is held to remember the 'Stolen Generations'.

1999: The Australian Government issues a 'statement of deep and sincere regret' over the forced removal of Aboriginal children from their communities, but does not apologise. 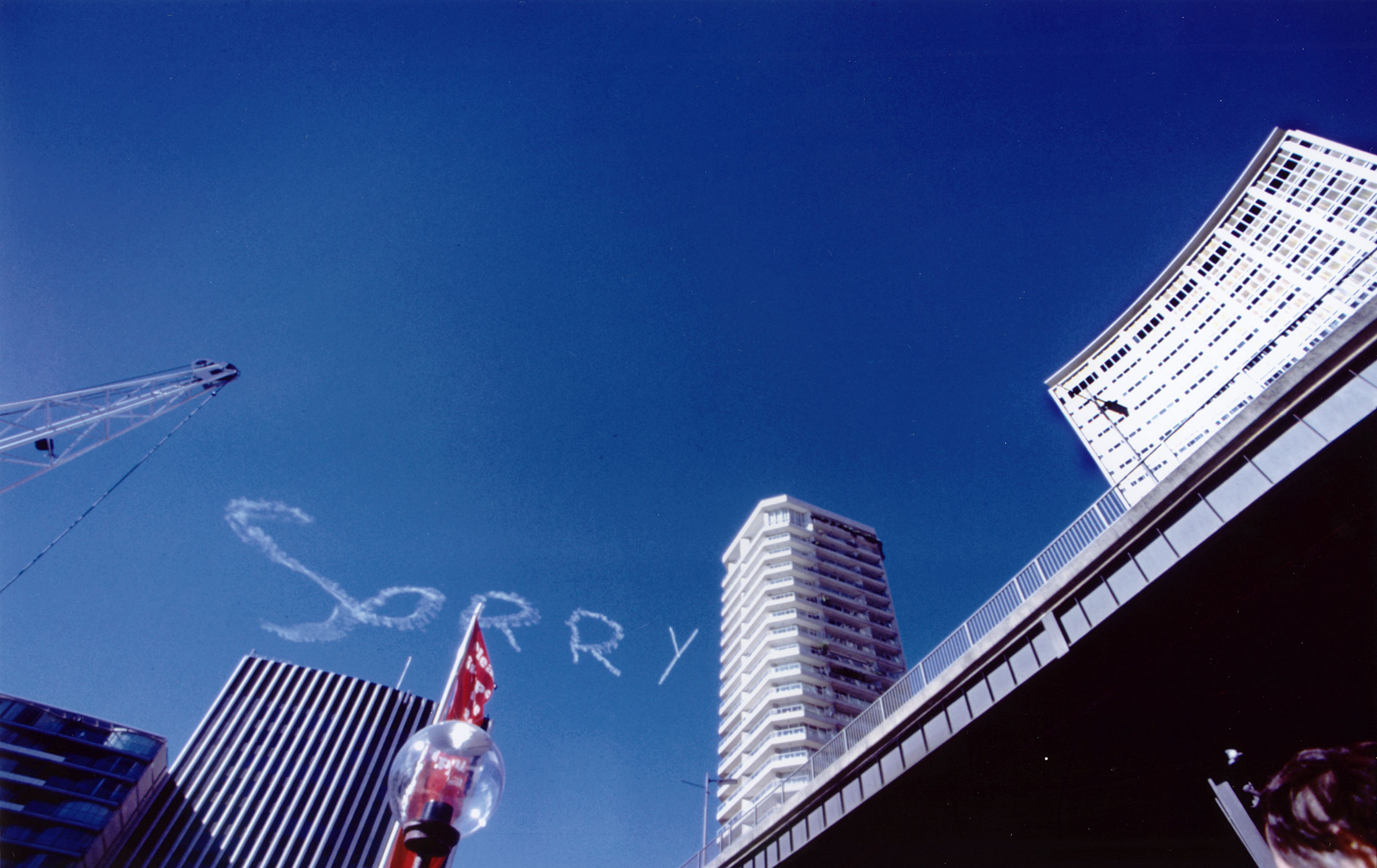 'Sorry' painted in the sky during Corroboree 2000

2000: Corroboree 2000 is held as the Council for Aboriginal Reconciliation nears the end of its 10-year life.

2000: Nova Peris Kneebone begins the Olympic torch relay at Uluru, Cathy Freeman lights the cauldron at the Sydney Olympics and wins a gold medal in the 400-metres event.

2000: The Australian Government denies that a 'Stolen Generations' exists.

2003: Following a review of ATSIC, John Howard's coalition government announces the establishment of a new executive agency, the Aboriginal and Torres Strait Islander Services. ATSIS takes over from ATSIC responsibility for administering programs and making decisions on funding for grants and other services.

2005: ATSIC, the peak Aboriginal and Torres Strait Islander representative body, is abolished and closes at midnight on 24 March. Regional offices continue to operate until 31 June.

Responsibility for programs formerly managed by ATSIC and ATSIS are transferred to mainstream departments and agencies and a group of Aboriginal and Torres Strait Islander advisers are appointed to advise government and indigenous issues.

A collection for the future

After the closure of ATSIC, no one knew what would happen to the artworks and objects that had been removed from the organisation's office across the country. Many staff members felt it was important that everything should be kept together. The entire Aboriginal and Torres Strait Islander Affairs Art collection is now part of the collection of the National Museum of Australia, where the objects can be preserved, studied and displayed in the future.

This highly significant collection illustrates an important part of Australia's history. It is entwined with the story of the relationship between government and Australia's Aboriginal and Torres Strait Islander peoples from 1967 to 2005.

Many of the artworks and objects are also things of great beauty. And all of them are like objects in a time capsule – a time capsule representing the regional and stylistic diversity of Aboriginal and Torres Strait Islander art and culture over nearly 40 years.

After the closure of ATSIC, the Australian Government appointed an advisory body, the National Indigenous Council, to provide advice on Aboriginal and Torres Strait Islander issues. However, following the election in 2007 of a Labor government, the Council was abolished.