The story of the Irish in Australia is one of survival, endurance and invention. Their lasting legacies were seen through a series of large objects on show in the Hall of the National Museum during the Not Just Ned exhibition.

Tommy Doherty brought his family’s traditional Irish side car, also known as a jaunting car, to Australia in 1999.

A well-respected member of Melbourne’s Irish immigrant community, Tommy was ‘Irishman of the Year’ in 2003. He used the car in St Patrick’s Day parades in Melbourne.

In February 2009 the Victorian bushfires destroyed Tommy’s home. When he returned to the ruin, he found the jaunting car, virtually untouched. It was the only survivor of the flames.

Tommy hails from County Donegal in Ireland. His father built this car over many years from parts found across Ireland. The family used it on many special occasions, such as taking Tommy’s sisters to church on their wedding days. 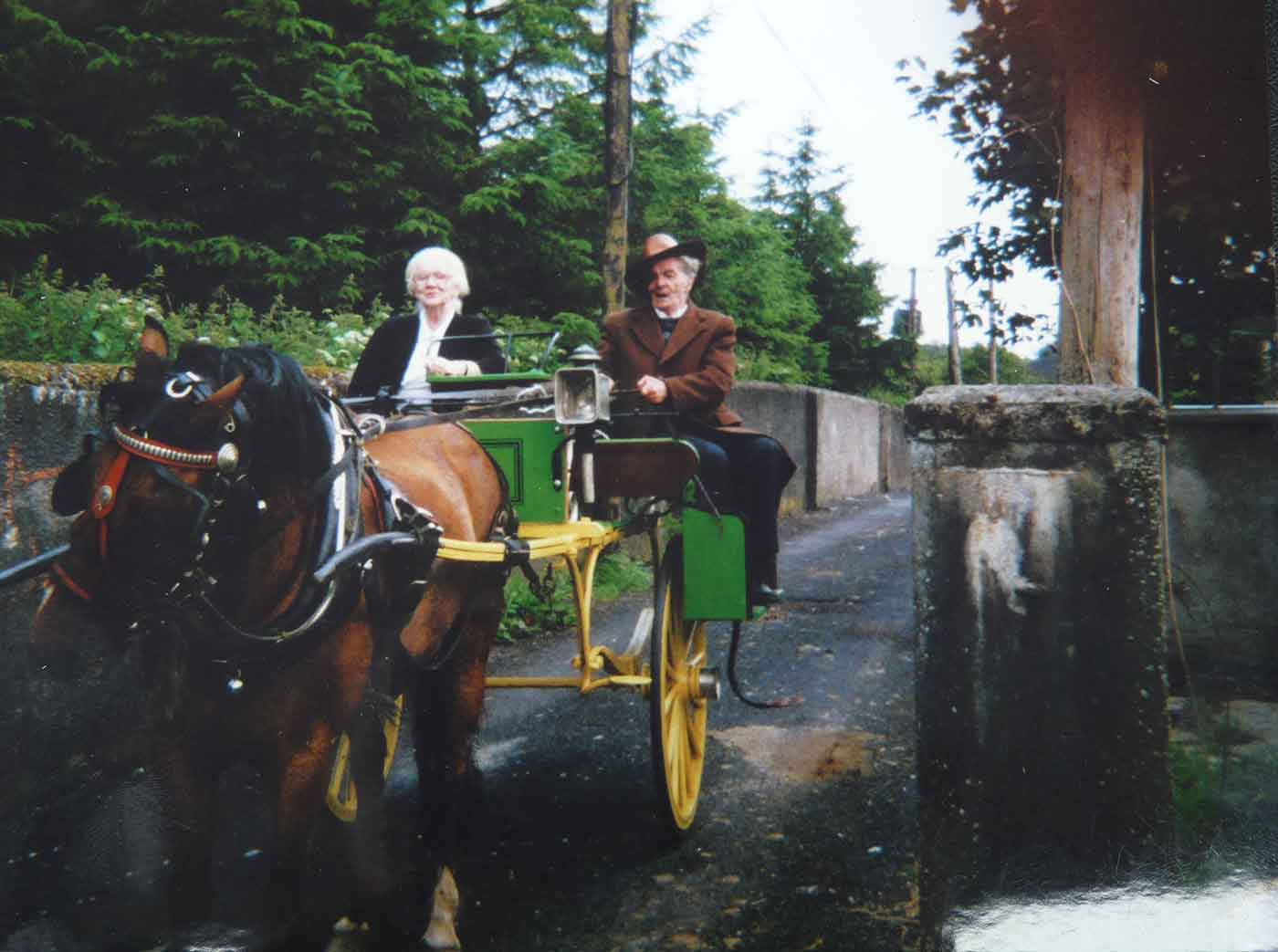 Michael and Elizabeth Doherty in their jaunting car in County Donegal, Ireland

Paddy MacDonald: A promoter of all things Irish

He has done many remarkable things in his life, including designing a new lightweight monk’s habit for the Australian climate, shaking a record 9935 hands in Sydney to raise funds for autistic children, and playing St Patrick on St Patrick’s Day.

Paddy is clearly more than a ‘simple Irish boy’, which is how one newspaper once described him.

There is no more enthusiastic promoter of the abiding links between Ireland and Australia. Paddy brought to Sydney an Irish racing currach, a traditional fishing boat from the Aran Islands. This boat is a reminder of a tough way of life, of a struggle for survival on isolated islands. 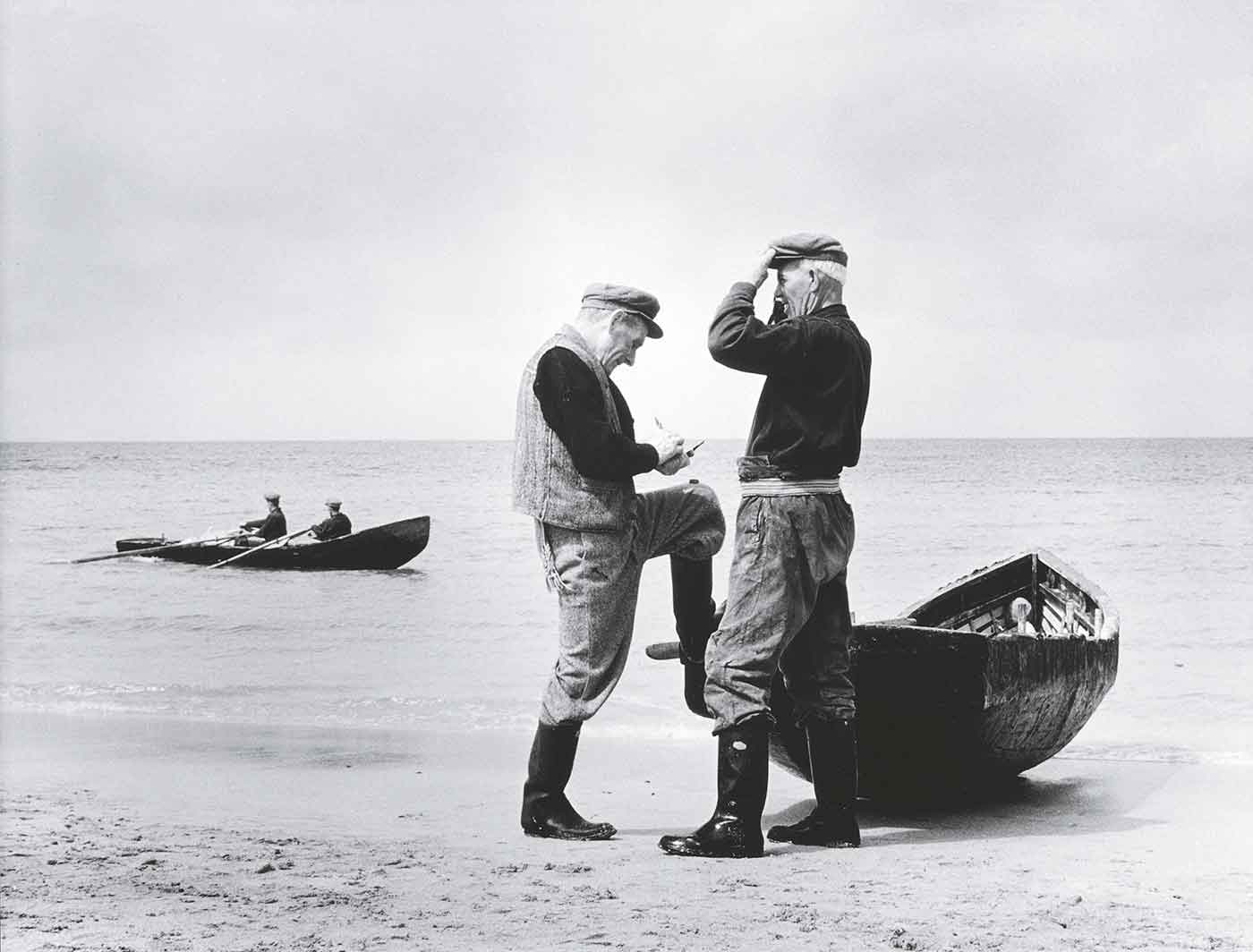 They were honouring a man described as ‘Kalgoorlie’s pioneer’. The original statue was removed after being vandalised in 1983. A replica now sits in its place, in Hannan Street, outside Kalgoorlie’s Town Hall.

On 10 June 1893 a party of three Irish prospectors, led by Hannan, found gold at Kalgoorlie. They had in fact stumbled on what was to become one of Australia’s biggest goldfields.

It is unclear who actually first found the gold, but it was Hannan who registered the claim under his name. Within a few years the Kalgoorlie landscape was dotted with mines, some with names like Hannan’s Main Reef, or Hannan’s Golden Drop.

The Western Australian Government gave Hannan a small pension for life for his contribution to the development of the state. 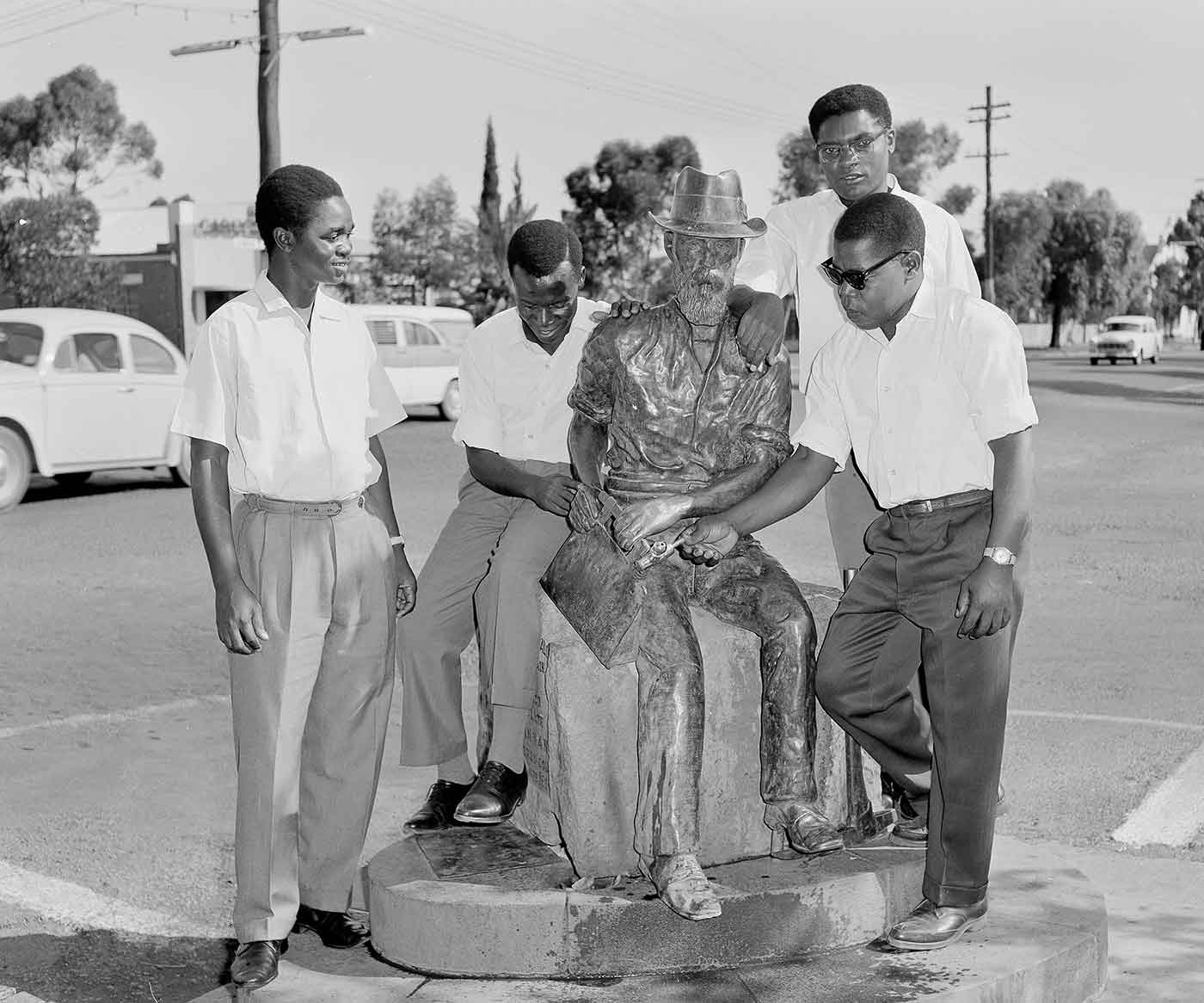 Tanzanian mine workers pose with the Paddy Hannan memorial statue

The 1959 Wolseley 1500 car is of British design but was largely manufactured in Australia.

The Wolseley marque takes its name from Frederick York Wolseley, born in Kingstown, County Dublin. Wolseley founded the company that created the car and had a dramatic influence on Australia’s pastoral industry.

Wolseley arrived in Australia in 1854. In the 1880s he brought together a team of skilled men to develop Australia’s first machine-powered wool shears.

These were demonstrated successfully in 1888 at Dunlop station, New South Wales, which belonged to Irish millionaire pastoralist, Sir Samuel McCaughey. By 1889 more than 45 large woolsheds had installed Wolseley shearing machines.

Wolseley returned to England in 1889 to set up the Wolseley Sheep Shearing Machine Company. He resigned in 1894, but the next year the company’s general manager, Herbert Austin, designed and manufactured the first Wolseley car. 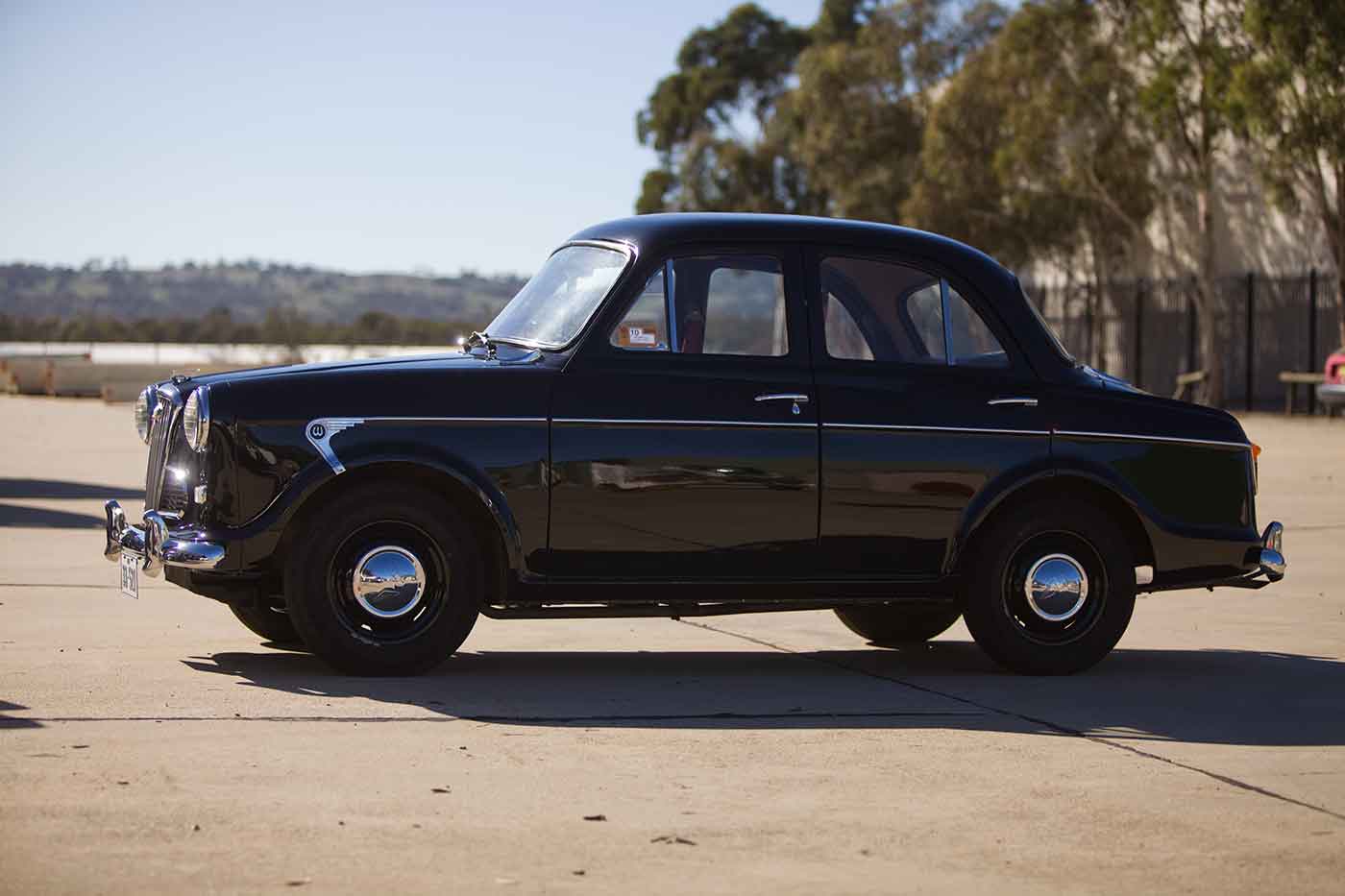 James Morrow and the Union harvester

As the wheat-growing areas of Australia expanded in the 1870s and 1880s, the race was on to invent a machine that could both cut the wheat and winnow the grain from the stalk.

For decades it was accepted that McKay, with his successful Sunshine Harvesters, had invented the machine. But recent research shows that it was Morrow who, with his ‘stripper-harvester’, won a prize at field trials in December 1883.

Morrow patented his invention in January 1884, months before McKay’s first workable harvester appeared. He called his harvester the ‘Union’ because he was a member of a trade union most of his working life.

Morrow died in 1910, but his harvester was manufactured up to 1914 by the firm of Nicholson and Morrow. 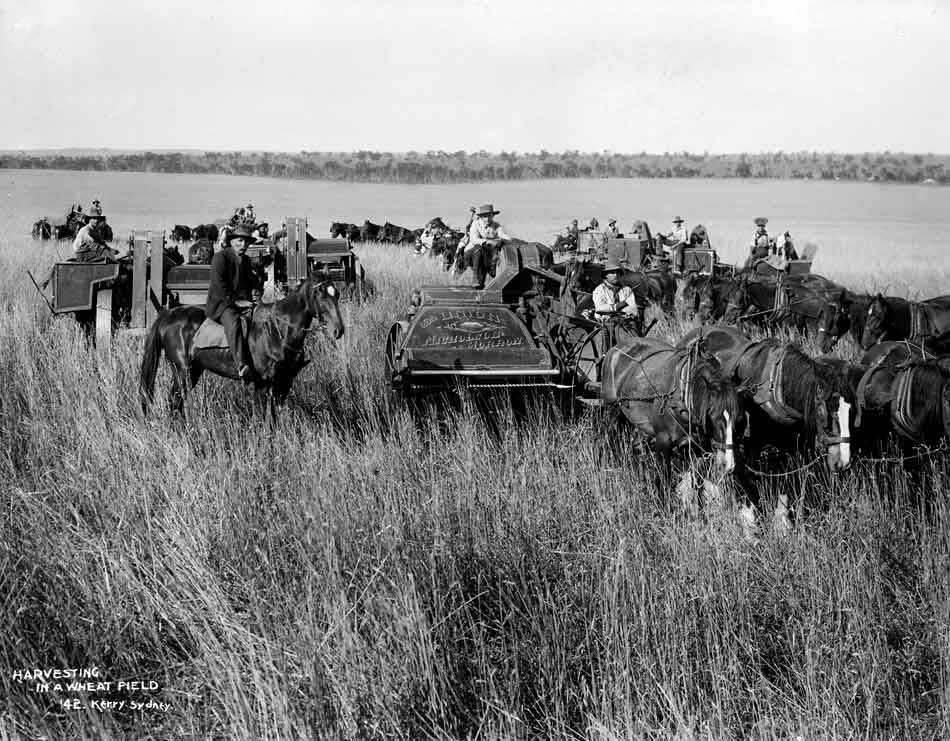 A Nicholson and Morrow harvester in operation

The Furphy water cart, designed by John Furphy in the 1880s, was a common sight in the Australian bush.

But the Irish name ‘Furphy’ carries a much broader meaning. It all began in military camps during the First World War, with the purchase of Furphy water carts by the Department of the Army.

Drivers would position the carts near the camp latrines, well out of sight of officers, and the carts became a popular place for soldiers and cart drivers to gather and gossip. The rumours and stories generated from these sessions became known as ‘furphies’. Today a furphy still means a piece of gossip or rumour which is untrue.

Furphy was an engineering blacksmith and the son of Irish immigrant parents. He invented and produced the purpose-built cart to transport water to farms. Few houses in rural Victoria in the 1880s were designed to collect rainwater from the roof. Instead, barrels of water were carried to homes and farms on drays. 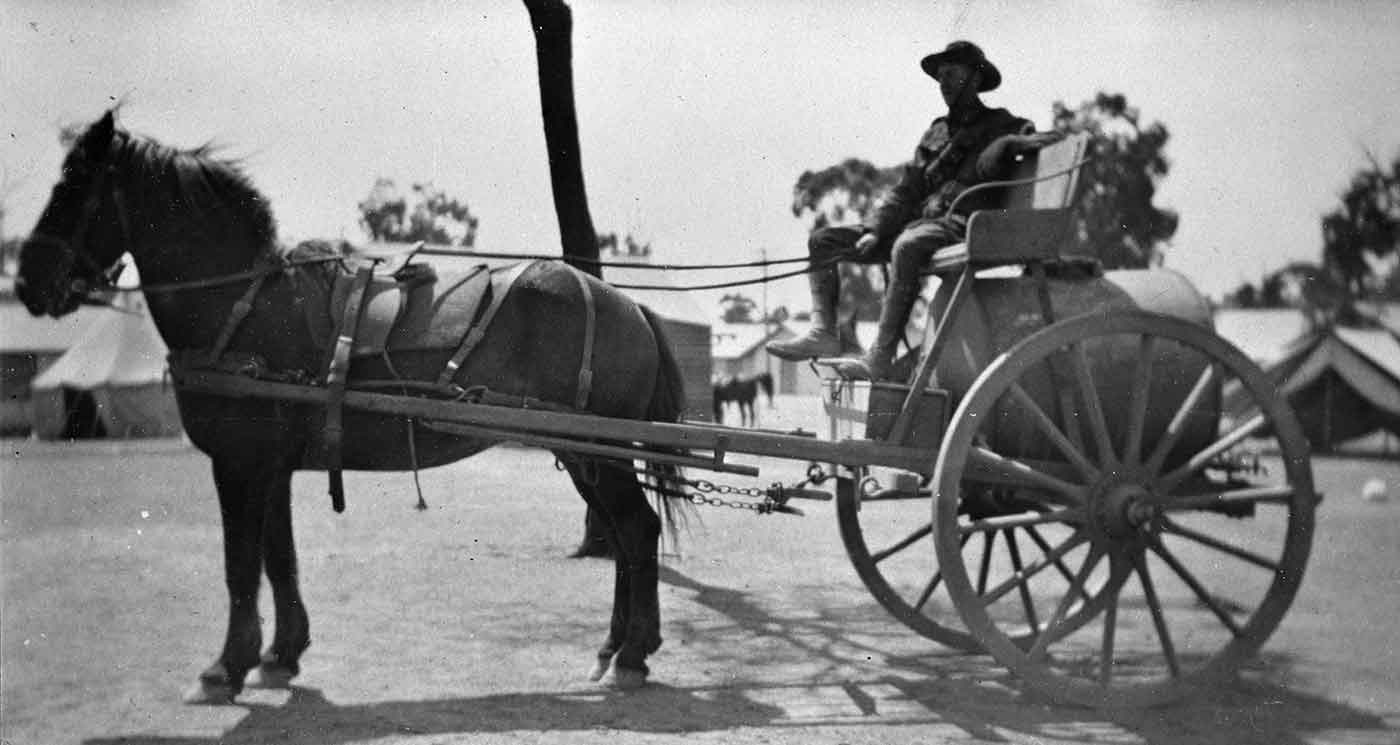