The legacy of Encounters 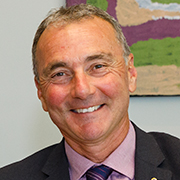 The landing of Lieutenant James Cook at what we now call Botany Bay in 1770 changed forever the course of human lives on the Australian continent.

Most importantly, it led to the decision to establish a convict settlement at Sydney within two decades. This history and the severity of its impact on the Aboriginal and Torres Strait Islander peoples of this land is undeniable.

Less well known are the actual circumstances of that first landing, when Cook and his ship’s crew encountered the Gweagal people on the shores of the Bay. There are accounts of the event, of course, but they are one-sided, written by Cook, Banks and others.

We do know that as the Endeavour’s boats neared shore, two Gweagal warriors came down ‘who seemed resolved to oppose’ them. There followed an exchange of spears and musket fire, and one of the men who stood courageously on that shore was wounded. We will never know his fate.

Like so much of the violence that was to come on Australia’s frontier, at its heart was a fundamental failure of trust and dialogue. Instead of establishing the terms of friendly and peaceful exchange, the encounter quickly turned on questions of force and firepower.

Astonishingly, the shield and spears used by those two Gweagal men exist today. They are in the collections of the British Museum, in London, and Cambridge University, and are among the oldest known objects of the nation’s Aboriginal cultures.

At present, however, the shield and spears are in a major exhibition at the National Museum of Australia. Encounters: Revealing Stories of Aboriginal and Torres Strait Islander Objects from the British Museum is the product of more than four years work with the British Museum and 27 Aboriginal and Torres Strait Islander communities around the nation – the communities from which these objects originated.

The Encounters project is unprecedented in the cultural life of the nation. I know of no other museum exhibition that has involved such extensive engagement across the country, with communities from Albany to the Torres Strait, from Tasmania to the Kimberley. It has been a remarkable journey, for both the community members and museum staff.

The depth of that engagement is plain to see. The exhibition in Canberra foregrounds the voices of people from the Indigenous communities alongside the historical artefacts. Together, they speak eloquently of the challenging histories of colonisation, and the devastating losses experienced by the nation’s First Peoples.

This project is playing its part in developing a new way of speaking about our past, a new language if you like, in this country. One that allows us to look honestly at our history, good and bad, as well as celebrating the manifest and varied achievements of the modern Australian nation state.

For all that Encounters says about our shared history, it proves to be as much about the present as it is about the past. Each community has contributed contemporary pieces to the exhibition that show the cultural practices of their people today. Across the country, communities are continuing or reviving skills and traditions that are deeply embedded in their culture.

At La Perouse, elder Dr Shayne Williams speaks of his deep feeling on seeing the Gweagal shield in Australia. ‘That shield represents a whole history of this country’, he says, ‘there’s a lot of emotions involved in this … we feel spiritual about it, we feel proud about it.’

Much will continue to be discussed and debated about the Indigenous collections in the British Museum, and by extension the vast Aboriginal and Torres Strait Islander collections in this country. This week, the National Museum hosts an international conference that will address these issues, with participants from Australia and overseas – from the United States, Canada, New Zealand, Norway, Denmark, Finland, Taiwan and the United Kingdom.

I cannot know where those conversations will end. But I embrace the opportunity that Encounters has presented to rethink the relationships between first and settler peoples and their collections in museums. Such discussions encourage us to think how we might embrace opportunities to open up collections and professional practice to better meet the interests and needs of communities.

There is still much to do in this country to ‘close the gap’ between Aboriginal and Torres Strait Islander peoples and the wider community. But alongside the compelling concerns we rightly have about disadvantage in Indigenous Australia, Encounters presents a stirring counterpoint – a vision of Indigenous communities that are vital, dynamic and proud of their people, cultures and land.

This is the real legacy of the Encounters project. It confounds glib assumptions of those who imagined the demise of Aboriginal people in earlier times. These rare, remarkable historical artefacts from the British Museum take us deep inside our nation’s history, but they also bear witness to the strength and endurance of Indigenous people today.