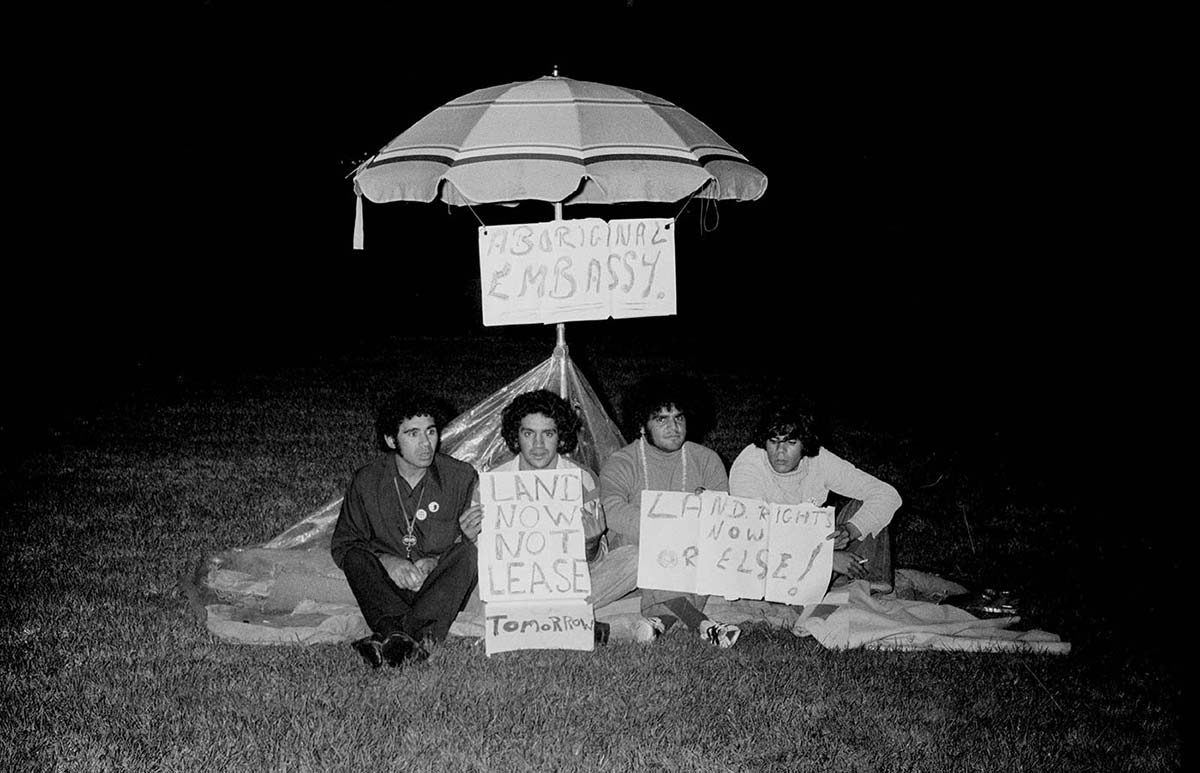 On 26 January 1972 four Indigenous men set up a beach umbrella on the lawns opposite Parliament House in Canberra. Describing the umbrella as the Aboriginal Embassy, the men were protesting the McMahon government’s approach to Indigenous land rights.

The embassy operated in a number of locations and took many forms before its permanent establishment on those same lawns in 1992.

The goals of protesters have also changed over time, and now include not only land rights but also Indigenous sovereignty and self-determination.

With its flags fluttering proudly in the breeze, the Aboriginal Embassy on the lawns opposite federal parliament has been one of the most successful press and parliamentary lobbies in Australian political history.

Since European settlement, Indigenous Australians have been fighting to retain the rights to their traditional lands. The 1960s and 70s was a period of greater national awareness of Indigenous activism and saw significant actions taken by groups in the land rights struggle.

In 1966, 200 Gurindji stockmen, domestic workers and their families walked off Wave Hill Station, beginning a strike that would last seven years. Lobbying the Northern Territory and Australian governments for equal pay and conditions, as well as land ownership, the Gurindji people bought these issues firmly into the public eye.

The 1967 referendum, in which Aboriginal Australians were finally recognised as citizens, also provided more momentum to the land rights struggle by raising the profile of Indigenous issues with the wider Australian public.

The 1971 Milirrpum v Nabalco Northern Territory Supreme Court case also highlighted the issue of land rights. In 1963, after traditional lands of the Yolngu people in Arnhem Land were sold without consultation to Nabalco, a bauxite mining company, traditional owners made several attempts to have the land returned, including the now famous Bark Petition.

When Justice Blackburn ruled against the Yolngu on the grounds that Native Title was not part of Australian law, Indigenous communities Australia-wide were outraged.

On the eve of Australia Day 1972, the McMahon government announced the implementation of a new system that rejected granting independent ownership of traditional land to Indigenous people in favour of 50-year general purpose leases for Indigenous communities, provided they could demonstrate a social and economic use for the land and excluding any mineral and forest rights.

After the ongoing disappointments of the land rights struggle, this announcement sparked action among many Indigenous groups and directly contributed to the founding of the Tent Embassy. 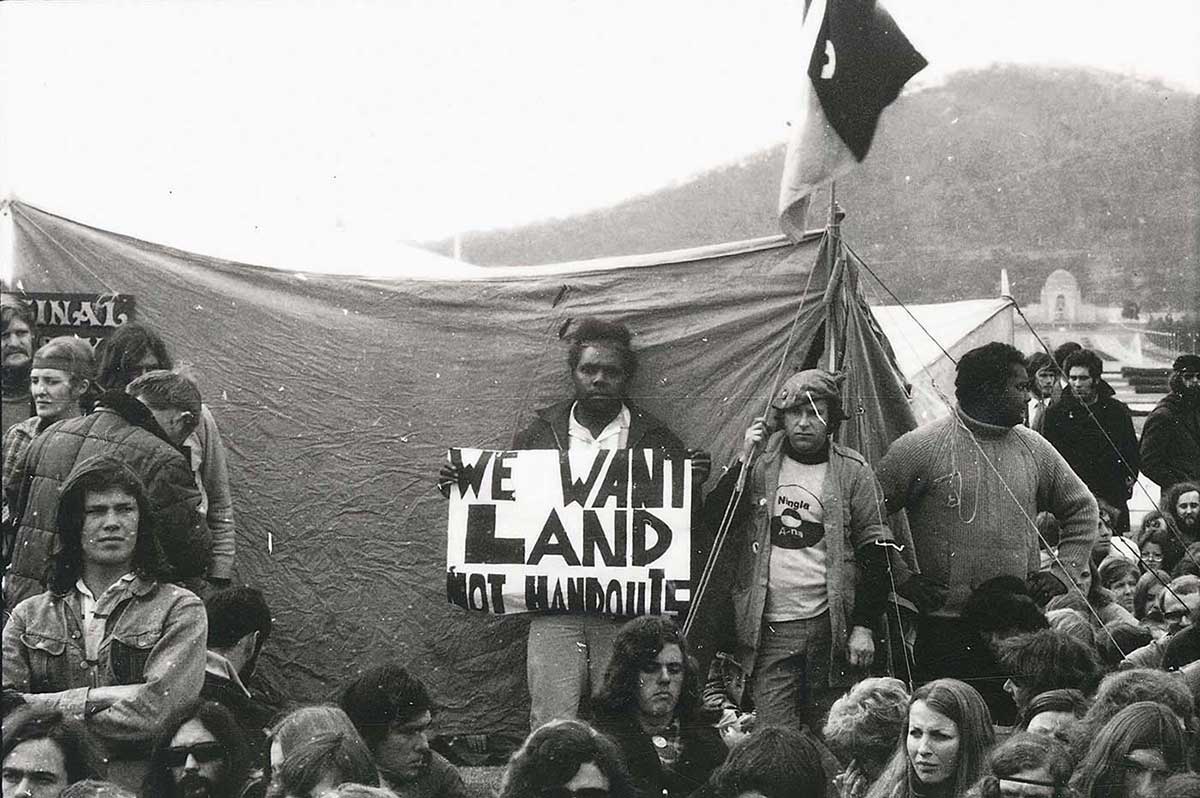 After the McMahon government’s announcement, many protest groups sprang into action, including a group from Redfern in Sydney. Four members of this group – Michael Anderson, Billy Craigie, Bertie Williams and Tony Coorey – drove to Canberra and set up a beach umbrella on the lawns opposite (what is now Old) Parliament House.

Labelled the ‘Aboriginal Embassy’, the sit-in protest was symbolic of the fact that the government’s statement had made Indigenous Australians, in the words of activist Gary Foley, ‘aliens in our own land, so like other aliens, we needed an embassy’.[1]

On 6 February the embassy issued a list of demands to the Australian Government. The list focused on land rights issues and demanded:

A visit from Opposition Leader Gough Whitlam to discuss the five-point plan was seen by activists as a great success in gaining recognition for their cause and having their ideas heard by those in positions of power. 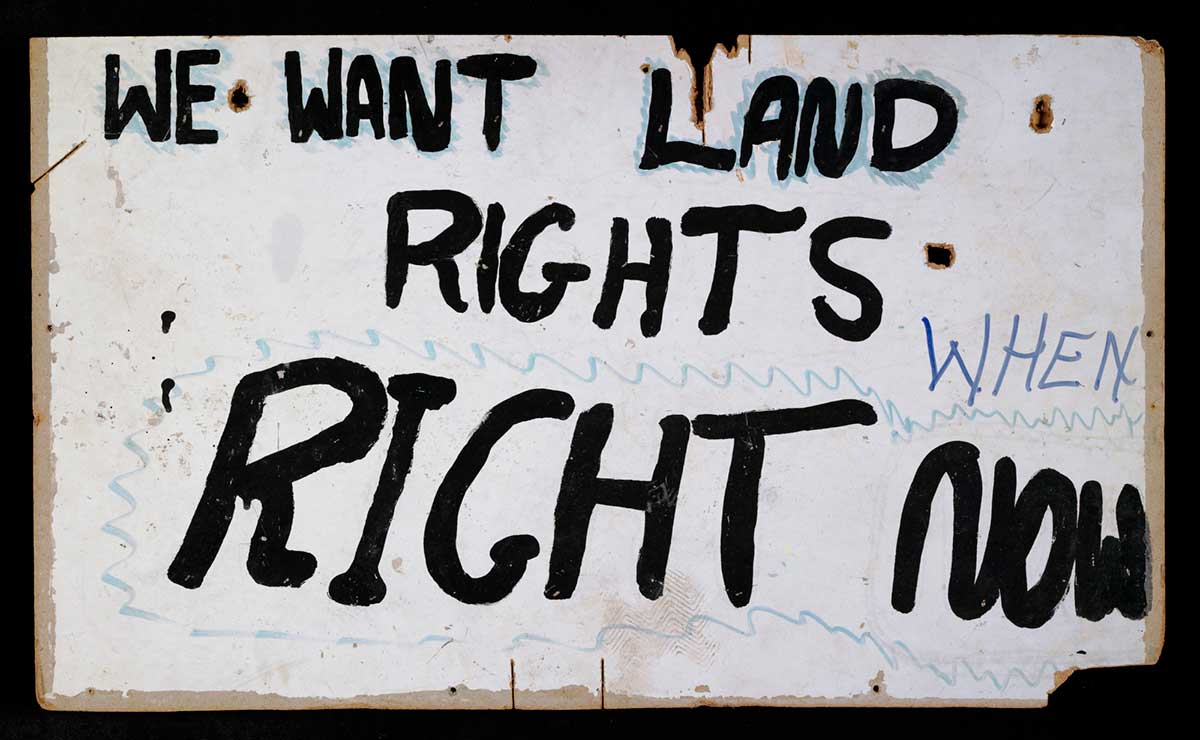 Rapidly gathering support, the embassy grew by April to include at least eight tents. It attracted both Indigenous people and non-Indigenous people from across the country who joined in solidarity over the land rights movement.

Support shown by official representatives from Aboriginal and Torres Strait Islander groups, as well as diplomats from a number of countries including Canada and Russia, helped bolster the profile of the embassy.

Support for the Embassy was also strong among the Canberra student population, with a number of Australian National University students assisting with billeting, joining the protest crowd and opening an embassy bank account.

Gaining media attention across Australia and internationally, the embassy site became a centre for protest, with a number of well-known Aboriginal activists spending time there. These included Gary Foley, Roberta Sykes, John Newfong, Chicka Dixon and Gordon Briscoe to name a few.

Groups from the embassy went on protest marches, lobbied government representatives and spoke at community forums to continue to raise the issue of land rights in broader public settings.

While the embassy enjoyed wide support, it also faced a large contingent of politicians and members of the general public who believed that the protest was nothing more than trespassing, and a blot on the Canberra landscape. 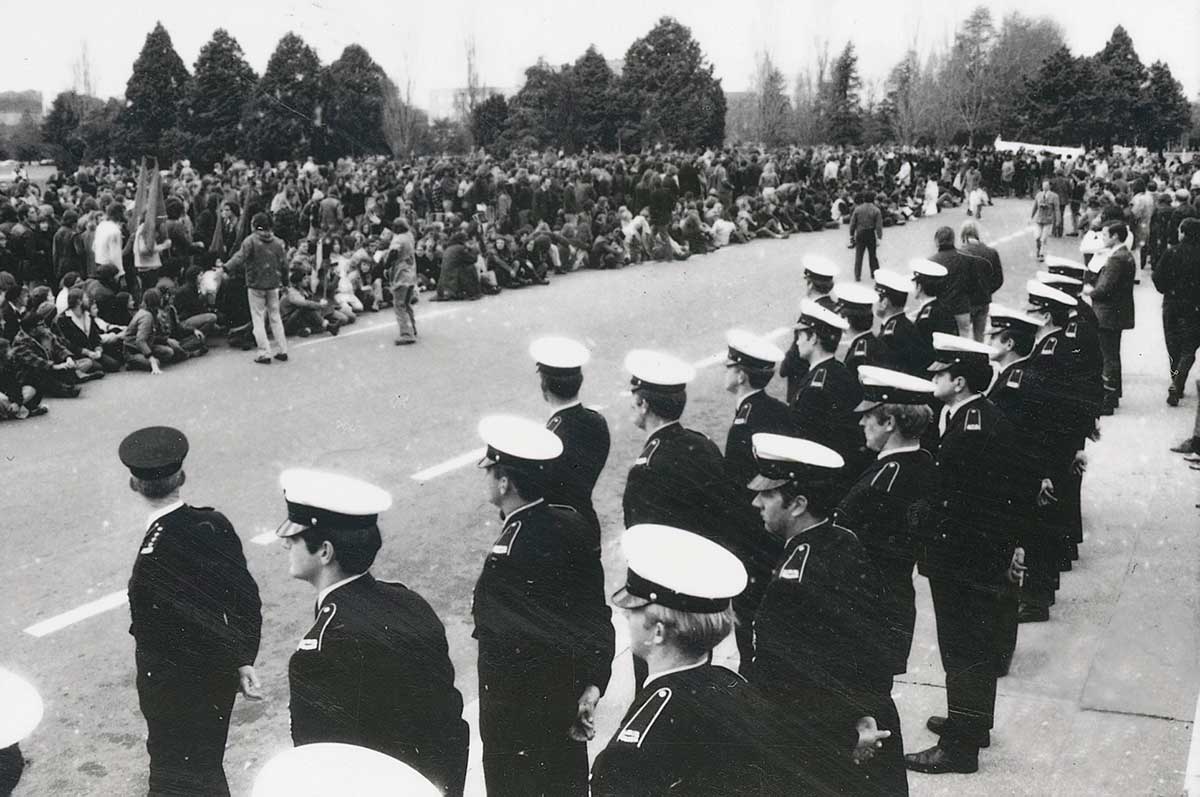 View from Parliament House of police and protesters at a land rights demonstration, Canberra, 30 July 1972

Offers were made to the embassy for buildings and a ‘club’ both on the original site and in other Canberra locations. However, these were refused as they were seen as a way of placating and removing protesters while making no real changes to the land rights situation.

In May 1972 Ralph Hunt, the Minister for the Interior, announced that new laws would come into effect making it illegal to camp on unleased land in the ACT and giving the government powers to forcibly remove anyone found to be in breach of the ordinance.

On 20 July hundreds of protesters clashed with police in a violent brawl after officers tried to move people along and remove the embassy tents. Many protesters were arrested and the tents were torn down.

The next Sunday, after the embassy tents had been re-erected, more than 200 protesters again clashed with police and the tents were removed for a second time. Images of police violence against protesters spread across the country, leading to even greater support for the embassy and its aims.

On 31 July 1972 more than 2,000 people were present when the tents were re-erected and then removed by protesters in a peaceful demonstration. After Justice Blackburn found the legality of the ordinance giving police power to remove protesters was invalid, protesters again peacefully erected and removed the tents in a symbolic gesture.

The removal ordinance was then legally introduced in September, preventing any further establishment of embassy tents at Parliament House. 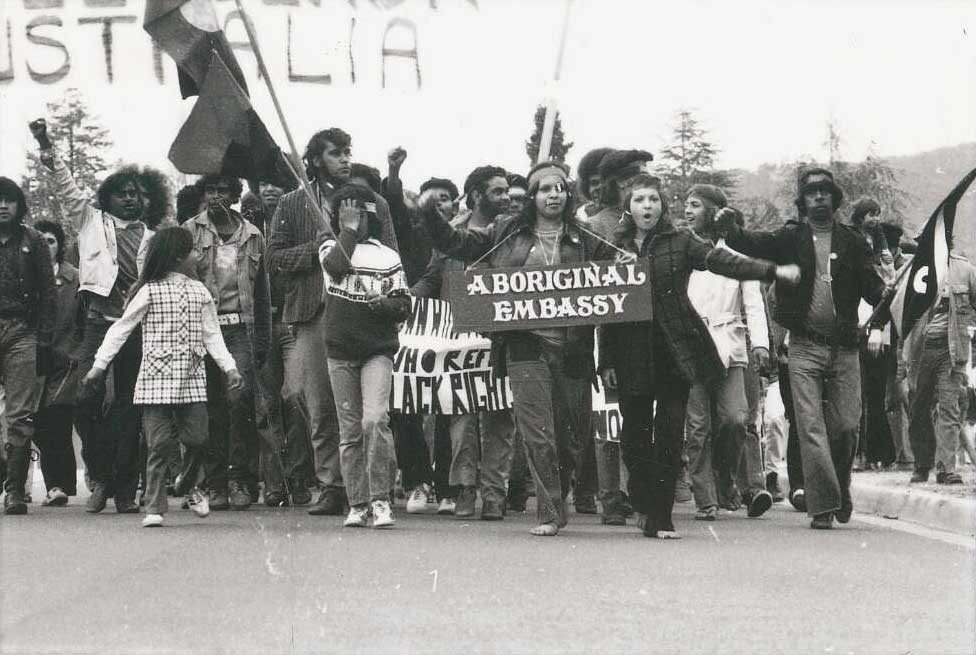 Demonstration march from the Tent Embassy

Between 1972 and 1992 the embassy was established at a succession of places across Canberra, including the site of the current Australian Parliament House.

Focusing not only on land rights, protesters now encouraged action on a number of issues including funding for Aboriginal communities, the political representation of Indigenous Australians, self-determination and Aboriginal sovereignty of Australia.

Future of the Tent Embassy

In 1992 on the 20th anniversary of the original protests, the embassy was permanently re-established on its original site on the lawns outside Old Parliament House. Protesters once more sought to raise the profile of Indigenous issues, fearing that those in power were again forgetting Indigenous Australians.

In 1995 the embassy itself was listed on the Register of the National Estate; the only site on therRegister noted as important due to its political significance to Indigenous Australians.

Since this permanent re-establishment, protests have been held at the embassy for a range of reasons, including against Aboriginal deaths in custody, the Howard government’s Northern Territory Intervention in 2007, and cuts to essential Indigenous services .

The embassy is still controversial. Many people have challenged its validity and a number of arson attacks have damaged buildings within the camp.

The Tent Embassy is a symbol of Aboriginal protest against successive governments and their approach to Indigenous issues. Today, the most prominent issue being publicised by the embassy is Aboriginal sovereignty over the Australian continent and an acknowledgement of an Indigenous right to self-determination.

John Newfong, ‘The Aboriginal Embassy: Its purpose and aims’ in Identity, July 1972.