William Percy Faithfull was born in October 1844 at Springfield and known as Percy. He attended The King’s School in Parramatta and then the University of Sydney, where he graduated with a Master of Arts in 1868.

He was admitted to the Sydney bar in 1870 but left for Queensland the following year where he took up farming as a sugar planter.

Percy Faithfull's Volunteer Rifles tunic is in excellent condition with little signs of wear. There is no obvious soiling, no cuff or pocket fraying, and no stains at the armpits. It is likely Percy's tunic was worn only during public parades and drills and to formal social occasions. [1]

The cut, colour and insignia help date the tunic and indicate that it was more likely to have been worn by Percy Faithfull and not one of his five brothers. The fitted cut and moderate length was typical of British Empire infantry uniforms of the late 1860s to mid-1870s. [2]

The change from grey to a red tunic was adopted by Percy's battalion during 1869 and 1870 and was well-documented in the newspapers of the day. This change in uniform colour reflected a significant shift in attitude, with the volunteer forces moving from signalling their independence from the British regular army to imitating them.

The stand-up collar on Percy's tunic features a silver crown indicating his rank as an officer. The buttons, decorated with a horn, crown and the letters 'VR', signal he belonged to a unit of the Volunteer Rifles.

Allegiance to the British Empire

Volunteer Rifle uniforms were similar to those of British soldiers, with members expressing their allegiance to the British Empire through their uniforms.

The force also had an important social role in society. They organised and attended public parades, games and picnics.

Although the grey trousers and belt worn with Percy's uniform have not survived, the Springfield–Faithfull family collection does include a shako and two rifles inscribed with 'Rifle Volunteers'. Like the tunic, the shako is a rare survivor of military uniforms worn by volunteer forces in 19th century Australia. 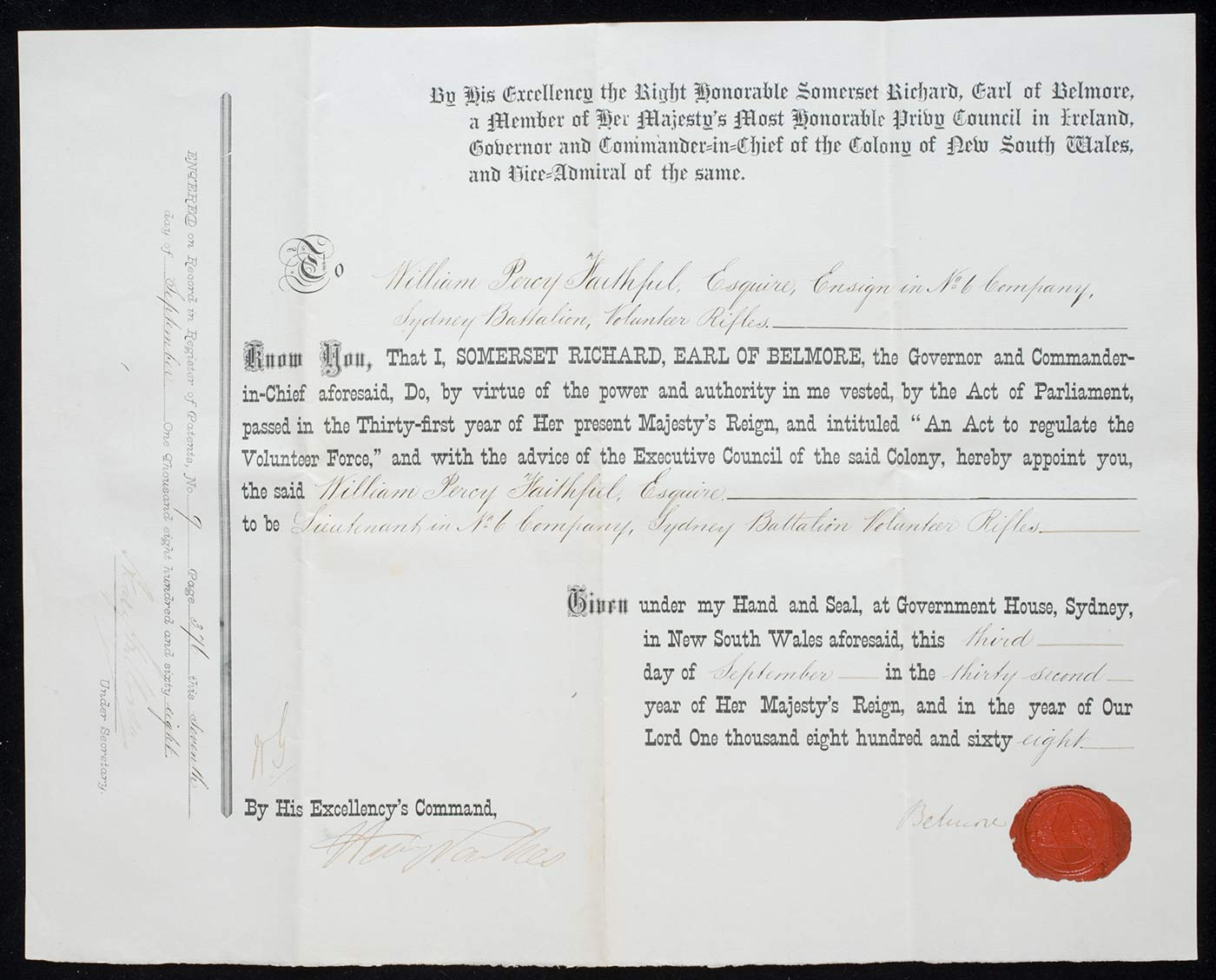 By His Excellency the Right Honorable Somerset Richard, Earl of Belmore, a Member of Her Majesty's Most Honorable Privy Council in Ireland, Governor and Commander-in-Chief of the Colony of New South Wales, and Vice-Admiral of same.

Know You, That I, SOMERSET RICHARD, EARL OF BELMORE, the Governor and Commander-in-Chief aforesaid, Do, by virtue of the power and authority in me vested, by the Act of Parliament passed in the Thirty-first year of Her present Majesty's Reign, and intituled "An Act to regulate the Volunteer Force," and with the advice of the Executive Council of the said Colony, hereby appoint you, the said William Percy Faithfull Esquire to be Lieutenant in, No. 6 Company, Sydney Battalion Volunteer Rifles.

Given under my Hand and Seal, at Government House, Sydney, in New South Wales aforesaid, this third day of September in the thirty third year of Her Majesty's Reign, and in the year of Our Lord One thousand eight hundred and sixty eight.

By His Excellency's Command
[handwritten signature]

['Belmore' is written next to the Seal.]

ENTERED on Record in Register of Patents, No. 9 Page 371 this Seventh day of September One Thousand eight hundred and sixty eight.

British Officer's 1827 sword of the Volunteer RiflesThis sword was part of William Percy Faithfull's Volunteer Rifles kit. William served in the New South Wales Volunteer Rifles from 1860 until 1871 - the last three years as an officer. He received a 50-acre land grant as reward for this service. The collection also includes Percy's uniform tunic dating from about 1870s, the infa...

[2] Craig Wilcox, A Study of the Springfield Collection Military Tunic, report written while Wilcox was a visiting fellow at the National Museum of Australia Research Centre, March 2008, p. 3.