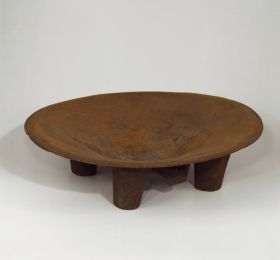 Forster Register B.20: ‘a wooden bowl for bread dough’

The kava bowl is made of one piece of wood. It is round and shallow, and rests on four legs which are set about 5.5 cm inwards from the rim. The legs are almost round, and become narrower towards the bottom.

The word kava refers both to the root of a certain plant, as well as the plant itself, which is a species of pepper plant, Piper methysticum. The plant was cultivated in order to make an intoxicating drink from its root, also known as kava (Anderson in Beaglehole 1967, Illb: 907f.; Mariner 1817b: 183). The kava root was cut up to produce the beverage. The resulting pieces were then chewed. According to Mariner (1817b: 190), the chewing was only carried out by young people (with good teeth and a clean mouth). Women often assisted in this part of the preparation. The chewed pieces of the root were then placed into a wooden kava bowl where they were eventually mixed with a quantity of water (Mariner 1817b: 191f.). The taste of the drink was described by Forster (1989, I: 371) as being ‘stale and disgusting, and biting to the tongue’. Concerning the taste and effects of the kava, Samwell (in Beaglehole 1967, Illb: 1035) stated: ‘... it has a strong bitter sickly taste peculiar to itself, it exhilerates the Spirits & is perfectly intoxicating tho’ it partakes more of the Effects of Opium than of Spirituous Liquors, causing Drowsiness and Stupidity; we never saw any of these people intoxicated by it nor have they the scaly Skin & sore Eyes by which the Otaheiteans Chiefs are distinguished, who drink an immoderate quantity of it ... .’. Samwell (in Beaglehole 1967, Illb: 1034f.) referred to how the Tongans prepared and drank their kava: ‘Every Morning the Chiefs and their attendants drink Kava .... the method of preparing and drinking it is as follows. The Chief sits crosslegged facing his attendants who sit in the same manner forming a half Circle with their faces towards him, a large wooden Bowl is placed in the middle, with some water at hand in a gourd, a quantity of the Kava root is brought in by a servant & every one except the Chief himself takes a bit of it & chews it; while they are performing this Operation, one man is employed in making small Cups of Plantain leaves, another in drawing a plant into Fibres with his Teeth, which they use like Tow for a strainer; these Things being got ready one of them went round for the Kava which every man delivered to him out of his Mouth ground into a mass full of Saliva. The Servant then put each portion together into the wooden bowl & poured a certain quantity of Water upon it according to the number of Guests, the proportion of about half a pint of the prepared Liquor falling to the share of each. He mixes the Mass & the water well together with his hands & then puts a handful of the Fibres in through which he strained the Liquor; when this was done he had a fresh Bundle of Fibres brought to him which he put into the bowl & thereby took up a sufficient Quantity of the Liquor for one person’s Share, & strained it into the Cup which was brought to him by the other Servant, who carried it first to the Chief himself ..., after that to the old Men, & so on till every one had his Cup & if there was any left it fell to the share of the person who prepared it.’

According to Mariner (1817b: 183f.), kava was consumed by chiefs and matapule (ceremonial attendants) alike. Women of rank, however, did not participate in large, public, kava ceremonies. Inken Köhler, Ulrike Rehr, Gundolf Krüger

Back to Tonga
Back to Ritual