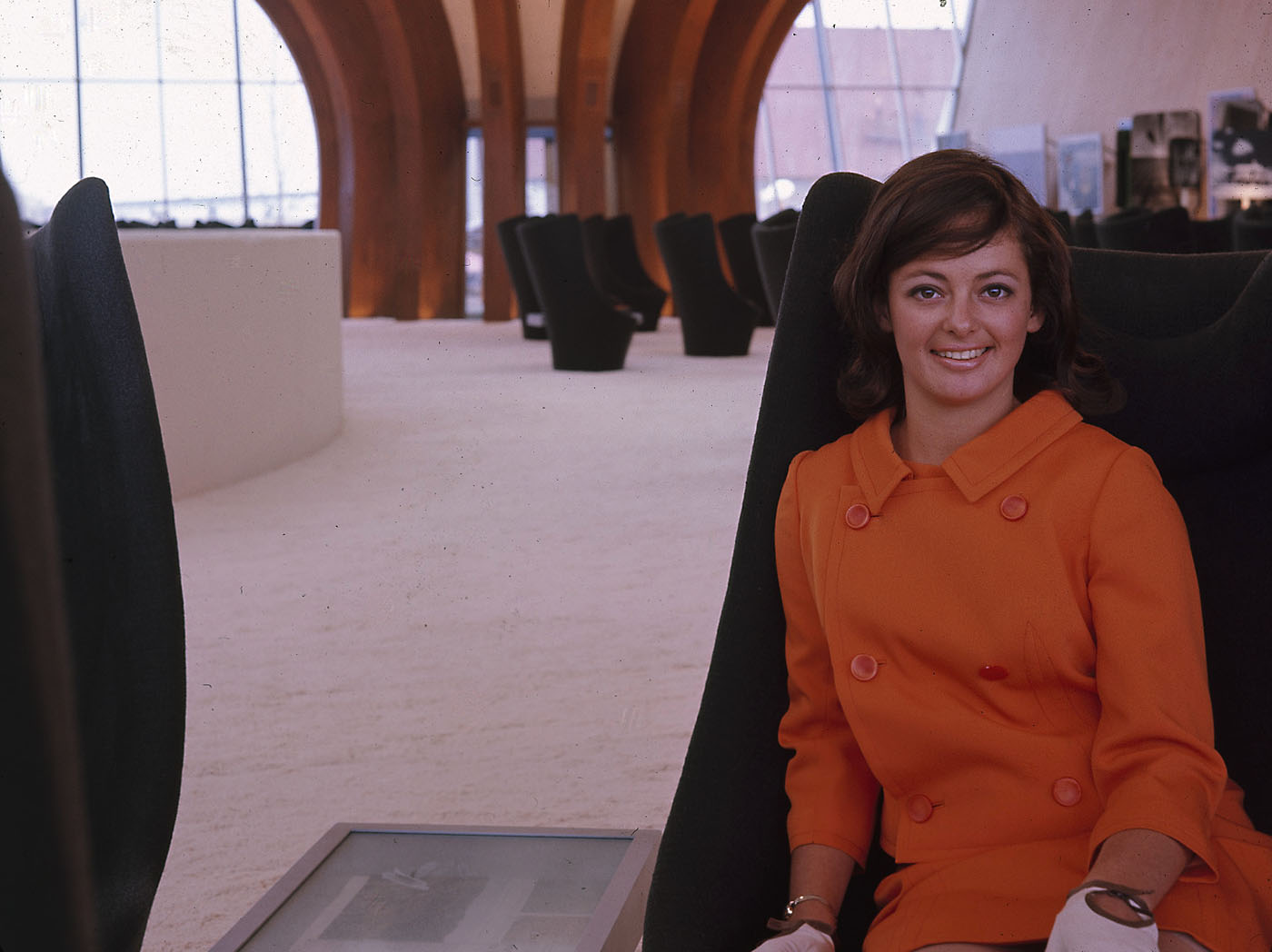 The Expo Mark II sound chair is an enduring legacy of Australia's contribution to the 1967 world exhibition in Montreal, Canada.

The chairs were commissioned by Robin Boyd, who designed the Australian pavilion's interior and displays at Expo 67. Boyd commissioned the Featherstons to develop a 'talking chair' to deliver information about Australia to visitors in seated comfort.

The Mark II sound chair acquired by the National Museum in 2007 was produced between 1967 and 1970. It was adapted for the domestic market from the original Expo chair design by Aristoc Industries.

The sound chair was made by moulding the shell in expanded rigid polystyrene, which was then upholstered in polyurethane foam and wool. The headrest, back and base were constructed in one continuous circular form, with a winged back. A circular seat of polyurethane was set into the base of the frame and two speakers were fitted to the internal shell in the head bolster.

These chairs are made for talking

The original Expo 67 sound chairs were upholstered in dark green wool with either a green cushion for English audio, or an orange cushion for French audio.

Speakers installed in the headrests were activated by the pressure of a person sitting in the chair. An audio system controlled from the basement played three-minute segments of well-known Australians talking about Australia and the exhibits surrounding the visitor.

The system, which cost $1 million to produce, was designed so that if an occupant of the chair left in the middle of the tape, it would start again from the beginning when a new visitor sat down.

A total of 2000 tapes were made to withstand the wear and tear of being used 12 hours a day, seven days a week for six months. The estimated life of a tape under these conditions was four to six weeks.

The original sound chairs, and the contents of the entire Australian pavilion, were given to the city of Montreal at the exhibition's end. It is unlikely that any of the original chairs returned to Australia.

The complex sound system controlling the chairs was designed and built through cooperation between government and private enterprise. The equipment was built by the Rola (Australia) Company while the computerised system for selecting the tapes was designed by Australian post office engineers.

The tapes played through the talking chairs featured the voices of famous Australians including: Sir Robert Menzies on natural resources, Sir Hudson Fysh on aviation, Sir Robert Helpmann on ballet and theatre, and Sir Mark Oliphant on science.

Montreal welcomed more than 50 million visitors to Expo 67 over a period of six months. Taking the theme 'Man and his World', the international exhibition featured displays from more than 70 countries, including Australia.

The theme of the Australian Government developed pavilion was the 'Spirit of Adventure'. The glass-walled building covered 30,000 square feet or 2700 square metres.

The display was designed as a 'haven of space and tranquillity' floating above a bushland setting.

Inside, visitors could marvel at models of Canberra, the Parkes radio telescope, the Snowy Mountains Hydro-Electric Scheme and a display of Australia's new decimal currency. Outside, visitors could see wallabies and kangaroos and a model Great Barrier Reef was re-created in a lagoon.

In 2007 the National Museum held an exhibition, Australia at Expo 67 Montreal, to mark the 30th anniversary of the event.

Apart from the sound chair, the Museum holds a collection of objects which belonged to former Australian pavilion staff members. This includes uniforms, staff passes, an expo passport, souvenir brooch and a ceramic bowl used in the VIP dining room. 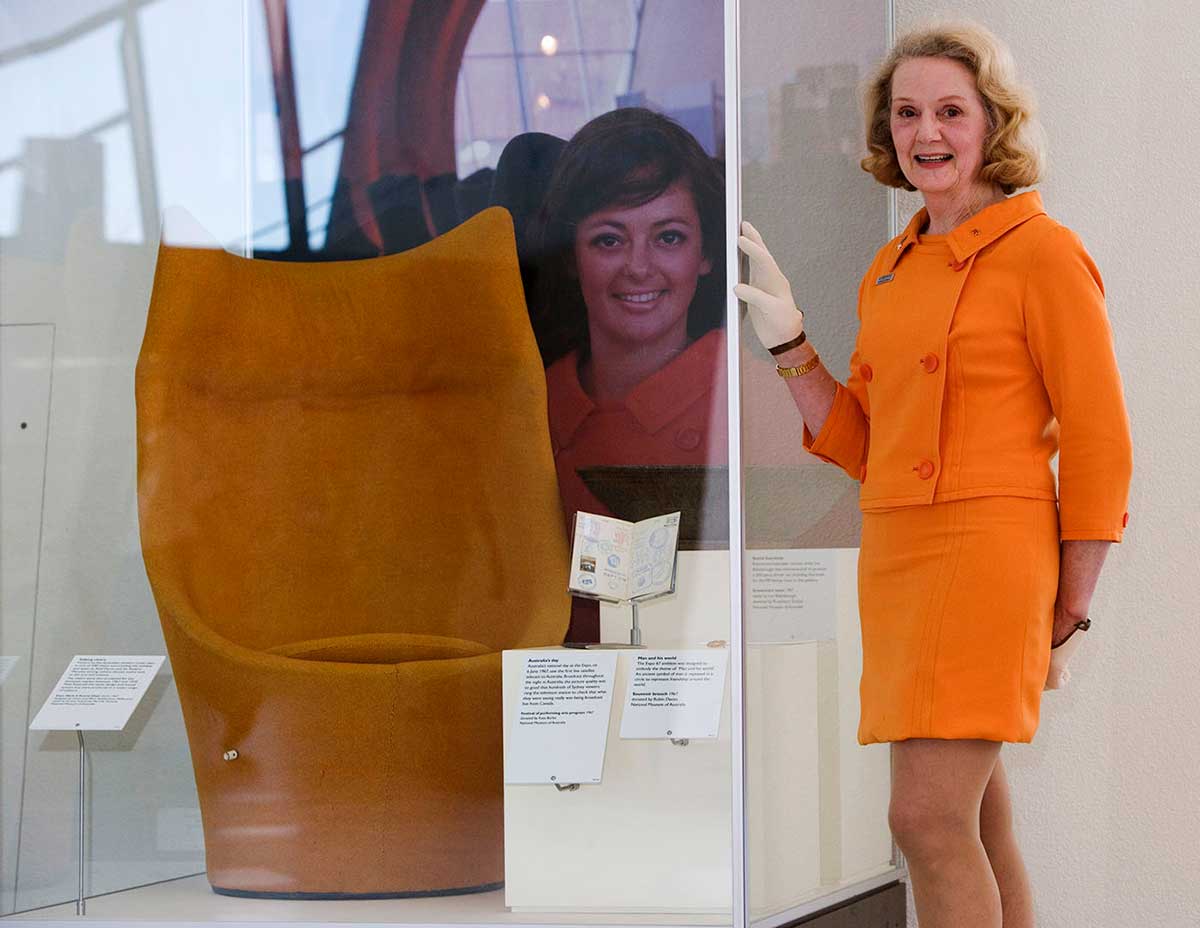 Mark II Expo '67 Sound ChairAn orange cloth-covered high back winged chair with a circular base. The chair has a circular orange cloth covered cushion in the base and an integral full-width headrest. Two 125mm diameter inserts are pressed into the top of the back of the chair where speakers are fitted inside it. There is a cylindrical knob on the side of t...
Facebook
Twitter
Pinterest
Messenger
Email