This ornate coffee urn was presented to Amelia Campbell for her role in defending her family’s property, Goimbla, against attack by bushrangers Ben Hall, John Gilbert and John O’Meally in 1863.

O’Meally was shot dead during the battle, near Eugowra in New South Wales. The grateful local community presented various gifts to Amelia Campbell and her husband David.

Bushrangers flourished in Australia in three periods. The first lasted from the beginning of European settlement until the 1840s and mostly involved runaway convicts.

The second phase coincided with the gold discoveries of the 1850s and involved both former convicts and convict escapees.

The final phase lasted through the 1860s to the mid-1870s, although serious isolated incidents – such as the Kelly Gang outbreak from 1878 to 1880 – continued until the early 1900s. Most of these bushrangers were native born.

About 2000 bushrangers have been recorded in written accounts in Australia. Many were jailed or hanged and some were killed in gunfights. Most have disappeared into obscurity. A few, such as Ned Kelly and Ben Hall, continue to be celebrated as heroes in Australian folklore.

I'm not a criminal. I've been driven to this life.

New South Wales was relatively free of large-scale bushranging until the 1860s, when there was an outbreak of activity in the Lachlan Valley. The recent discovery of gold in the area had brought in wealth and a new assertion of law and order. However, many of the local settlers, who ran cattle on small holdings for very little return, remained poor.

Resentful of authority and their impoverished lot, they often dabbled in petty crime and some spiralled into professional criminals.

Ben Hall, John Gilbert and Frank Gardiner led the most notorious gangs of the period. Membership of the Gilbert-Hall gang changed rapidly as individuals surrendered to police, ‘retired’, were captured or killed. John O’Meally was probably one of the best known of the gang members.

O'Meally joined the gang in about March 1862 and was involved in several armed robberies, including the attack on Gold Commissioner Henry Keightley's home at Dunn's Plains and, allegedly, the murder of at least two people.

From early 1863 to April 1865 the Gilbert-Hall gang reputedly robbed 10 mail coaches, held up 21 stores and homesteads, stole 23 racehorses, took over the village of Canowindra three times and killed two policemen. They also attacked the homesteads of prominent government officials and squatters.

On 19 November 1863 Ben Hall, John O’Meally and John Gilbert left their hideout in nearby Nangar National Park and conducted a night raid on Goimbla. The property was home to David and Amelia Campbell, David's brother William, station hands and servants.

After being confronted by the gang on his home’s verandah, David Campbell fired at the bushrangers. They in turn set fire to the hay-filled shed and the stables, where Campbell's prized racehorse was kept and perished.

William was out of action with an injury and the station hands refused to leave their huts, so Amelia Campbell sprang into action.

Amelia fetched another gun and ammunition and, when she had a clear view of O’Meally standing in front of the house, alerted her husband.

David ran outside, around the house, and by the light of the blaze, fired at the gang. He killed O’Meally instantly, while Hall and Gilbert fled into nearby bushland.

Eighteen months later, Hall was killed in a shootout with police on 5 May 1865 near Goobang Creek, on the Lachlan Plain.

Gilbert was shot dead by police near Binalong, New South Wales, on 13 May 1865.

Members of the local landholding community were immensely relieved that some among them had taken on the bushrangers and succeeded. The local press echoed the residents' satisfaction with O’Meally's demise, writing: ‘By the bullet he had chosen to earn his bread, and by the bullet he met his death.’ 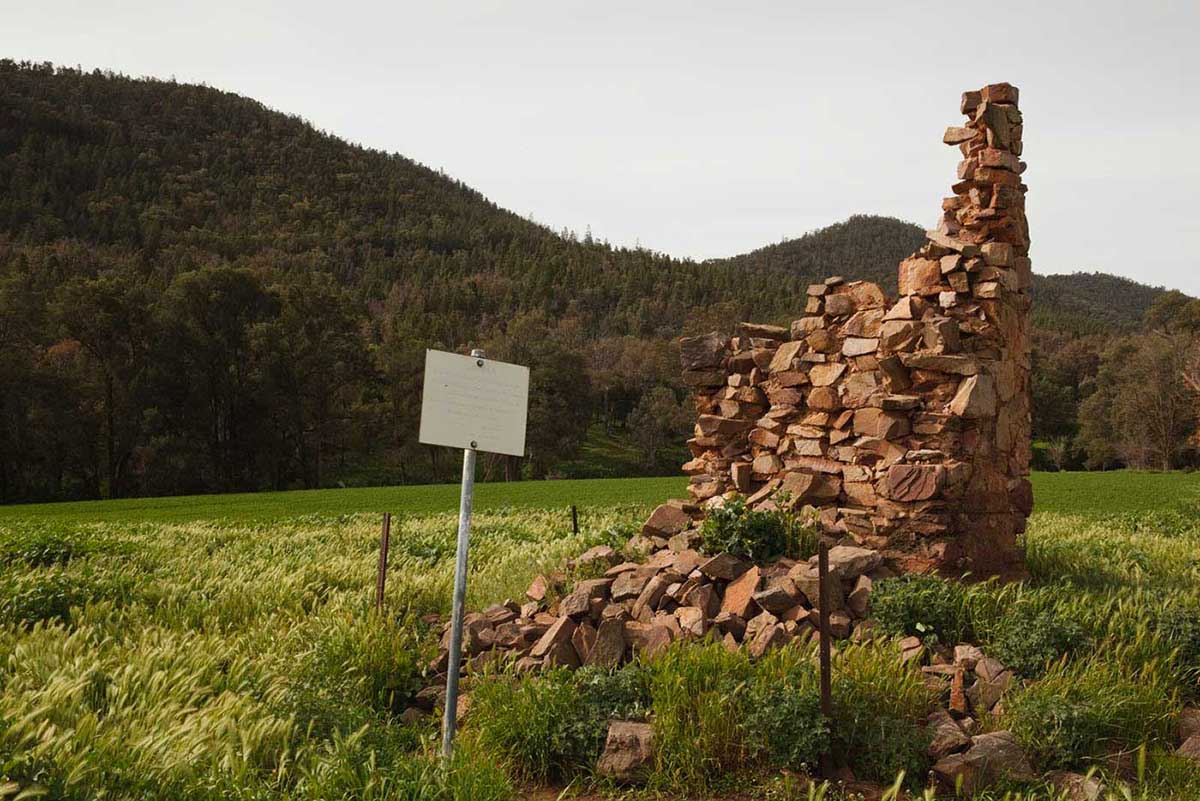 The remains of the Goimbla homestead chimney in 2010

Much was also made of the loss of the Campbells’ property, especially the horse. It was as if the local establishment was affronted not just by the agony the horse had to endure, but by the wilful destruction of something owned by a gentleman like David Campbell.

The Campbells’ heroic efforts in repelling the attack and – by killing O’Meally – breaking up the gang that had so long terrorised the region, inspired some of the local community to come together in expressing their sympathy and support. Meetings were held and £1000 raised to compensate the family for the loss of their property and livestock.

The community also presented the couple with gifts including three that are now in the collection of the National Museum of Australia. These are a printed silk cloth bearing a testament to the Campbell’s heroism, a letter of sympathy on parchment from dozens of undersigned ‘inhabitants of Forbes’, including the novelist Rolf Boldrewood, and the coffee urn engraved with a message of gratitude to Amelia Campbell.

Handed down through the family, these heirlooms bear witness to the Campbell’s bravery and were presented to the Museum by two of their granddaughters, Mrs VA Hope and Mrs RG Hanmer. Forming the Veda Hope collection, they are part of a rich collection of objects associated with Ben Hall and the wider history of Australian bushrangers held by the Museum.

The Campbells were also presented with an epergne (now in a private collection) while David received a pocket watch (now in the collection of the State Library of New South Wales).

Zoom for a detailed view of the letter to Mr and Mrs Campbell from the Forbes community:

Sympathy letter on parchment to Mr and Mrs Campbell of Goimbla from the Forbes community, 1863. The letter includes 93 signatories from the Forbes district, including novelist Rolf Boldrewood

Public opinion about bushrangers at the time of the Goimba attack varied. Some people were nervous about the state of the society they were living in and their personal safety. Others identified or sympathised with the bushrangers, or were silent in their disapproval because they feared reprisals.

David Campbell was known for his animosity towards bushrangers, having previously participated in pursuits and made strong public statements against their activities. His opposition to public violence and disorder may have contributed to the attack on his family and property. Campbell knew he was a target and kept a gun and ammunition at hand.

It is perhaps significant that his station hands refused to help in the defence of Goimbla. With the outbuildings on fire and shots being exchanged, it would have been a frightening situation, but the station hands were rural labourers like Hall, Gilbert and O’Meally had been before they turned to bushranging.

They may have known the bushrangers personally and may have been reluctant to get involved because they were secretly in sympathy with them, or feared reprisals. For these reasons, bushrangers were sometimes passively protected by their own people.

A few years after the dramatic events at Goimbla, the Campbell family moved to a property at Murrumburrah in New South Wales. Having passed into new hands, Goimbla homestead burned down in 1935 while its owners were in Sydney attending the Anzac Day service. The property continues to be farmed today.

The story of the dramatic events that transpired at Goimbla in 1863 has not been forgotten by the Campbell's descendants. In November 2013, the great great-grandchildren of David and Amelia Campbell visited the National Museum in Canberra, where they viewed the family treasures that comprise the Vera Hope collection. 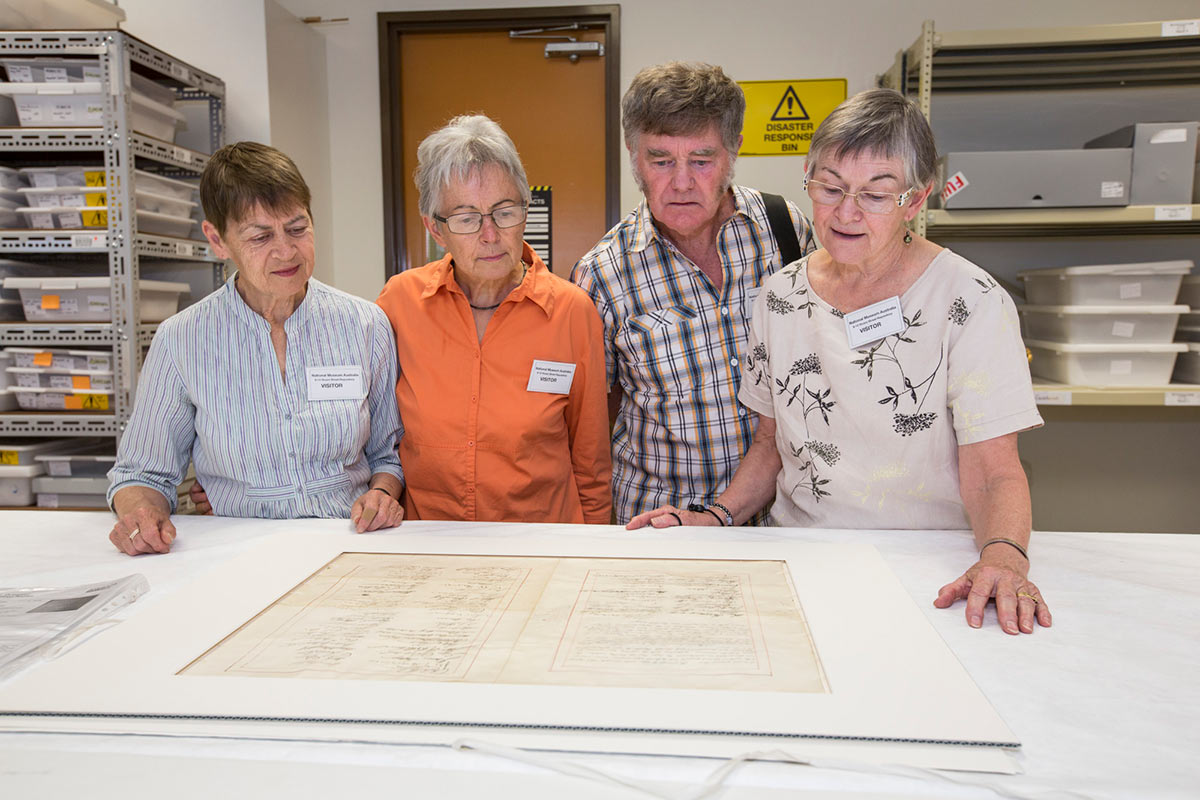 Coffee urn presented to Amelia Campbell after the 'Battle of Goimbla' in 1863The coffee urn commemorates the attack on David Henry Campbell and his wife, Amelia, at their station "Goimbla" near Forbes NSW on the night of November 19, 1863 by bushrangers Ben Hall, John O'Meally and an accomplice Gilbert. David Campbell refused to surrender to the gang who set alight the barn and stables. At this point, ...
On display