One Country. You line up, everybody belong.

Art centres represented in the collection

Birriliburu Artists and Tjukurba Gallery are managed by the Shire of Wiluna. Wiluna marks the beginning of the Canning Stock Route, and Well 1 is situated only minutes from the gallery.

Previously used as a hospital, horse shelter and a store, the refurbishment of the space in 2005 created an exhibition area, artists' studio and library.

An integral part of the Wiluna commmunity, Tjukurba Gallery enables artists to access professional support, celebrate their culture and benefit from the ethical sale of their work.

Birriliburu Artists shares strong ties with the Martu and Ngaanyatjarra artists at Martumili and Kayili.

Kayili Artists is the arts enterprise for the tiny community of Patjarr on the Ngaanyatjarra lands of Western Australia. Patjarr is located on the edge of the Gibson Desert Nature Reserve, 240 kilometres north of Warburton.

In September 2004 Kayili began operations as an art centre owned and governed by Aboriginal people. The paintings of its artists are known for their vibrant colours, raw painterly quality and vitality.

Kayili regularly supports artists and their families on 'return to Country' trips, enabling them to maintain the ancestral connections that infuse their work.

Mangkaja Arts began in Fitzroy Crossing in the mid-1980s, in a tin-and-cement shed, from which the artists took their name (mangkaja is the term for a traditional wet weather shelter).

Mangkaja's early training and exhibitions program created wide interest, and in 1991 a landmark show, Karrayili: Ten Years On, was held at the Tandanya National Aboriginal Cultural Institute in Adelaide. Mangkaja is an Aboriginal-owned and -governed art centre, run by a board of directors, with representatives from each of four language groups.

Fitzroy Crossing is the traditional Country of Bunuba people; the Country of their Gooniyandi neighbours lies to the east, and Walmajarri and Wangkajunga people come from the Great Sandy Desert in the south. Mangkaja's vivid style, born of this rich intersection of cultures, has attracted global attention.

Martumili represents artists from six Martu communities in the Pilbara: Kunawarritji, Punmu, Nullagine, Parnpajinya/Newman, Jigalong and Parnngurr. Since starting up in late 2006, it has grown rapidly, establishing a national reputation for innovative and dynamic art practice.

Martumili has staged exhibitions throughout Australia and is attracting a growing international audience. Martumili focuses on collective arts projects that have strong links to Country and culture, often resulting in the production of large collaborative paintings. Martu lands cover a large stretch of Country, from south of Well 5 to Well 39 on the Canning Stock Route.

In the early 1990s a group of 15 artists began painting, carving and weaving at the Wangkatjungka annexe of the Karrayili Adult Education Centre. Most of these artists were born in the desert to the east of the Canning Stock Route, and in their paintings they record stories of sites in their Great Sandy Desert homeland.

Ngurra and Mangkaja artists are closely connected through family and community networks. They also share with Martu people ties to the Country at the northern end of the stock route.

Established at Papunya in the early 1970s, Papunya Tula Artists is often credited with initiating the contemporary Aboriginal art movement. Owned by Aboriginal stakeholders, the company now extends its operations far to the west of Alice Springs, into the communities of Kintore and Kiwirrkurra.

The Papunya Tula painting style derives directly from the artists' knowledge of the traditional body and sand paintings associated with ceremonies. This unmistakable style has led to Papunya Tula artists being represented in leading public galleries, institutions and private collections, both nationally and internationally.

The aim of the company is to promote individual artists, provide economic development for their communities and assist in the maintenance of their rich cultural heritage.

Paruku is the Walmajarri name for Lake Gregory, an area of great spiritual significance to traditional owners.

Paruku IPA is not a conventional art centre; the recognition of Tjurabalan people's native title rights led to the establishment of the IPA in 2001. Many of the Paruku IPA artists lived and worked on Billiluna station and have strong connections to the region's droving history.

Art work produced by the Paruku IPA is used to map the cultural and ecological values of Tjurabalan Country. The traditional owners of Paruku include the Walmajarri, Jaru and Kukatja peoples.

The first exhibition of Balgo art, Art from the Great Sandy Desert, was mounted at the Art Gallery of Western Australia in 1986. The exhibition's success created the impetus to establish Warlayirti Artists in the following year.

The organisation has since grown significantly, and the artists represented by Warlayirti are internationally renowned for their luminous canvases. Through its work, Warlayirti contributes significantly to the social, cultural and economic wellbeing of the residents of Balgo, Billiluna and Mulan.

Yulparija Artists is based in Bidyadanga, 180 kilometres south of Broome, on the traditional land of the Karajarri people.

The 1966 equal pay decision resulted in many stations evicting their Aboriginal workers. This is when many Yulparija people came to Bidyadanga, leaving their traditional Countries west of the stock route far behind.

Motivated by a desire to pass on to their grandchildren their knowledge of their ancestral Country, the artists combine in their paintings an intimate knowledge of the desert with the rich colours of the salt-water Country. Yulparija Artists is represented by Short Street Gallery. 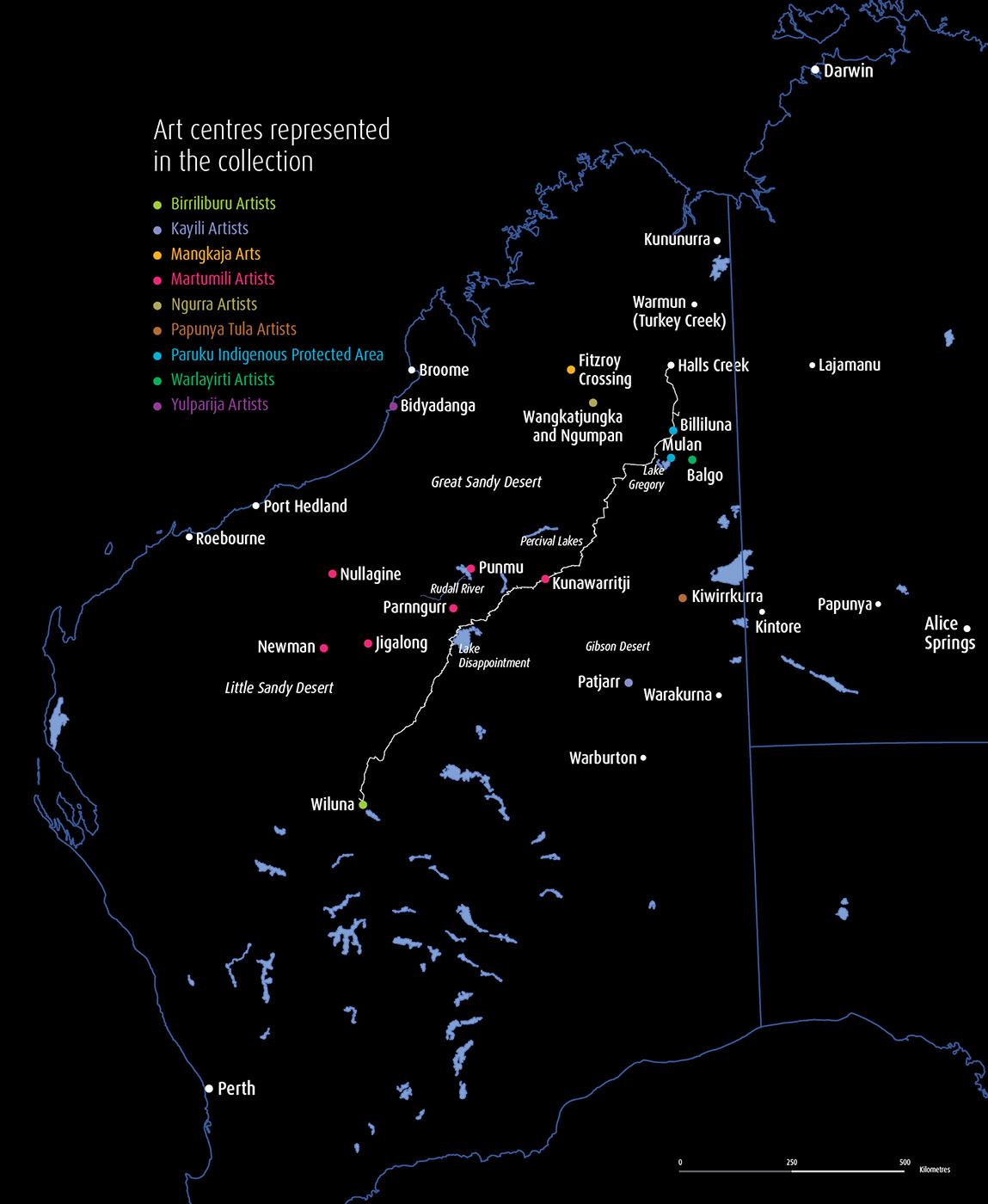