The National Museum of Australia’s blockbuster exhibition Songlines: Tracking the Seven Sisters will be on show at the Musée du Quai Branly, Paris, France, 4 April to 2 July 2023.

Songlines: Tracking the Seven Sisters showcases five First Nations songlines from Australia’s Western and Central Deserts. It uses over 300 paintings and photographs, objects, song, dance and multimedia to narrate the story of the Seven Sisters and their creation of the continent as they travelled from west to east.

As part of the 70th anniversary of Australian-German diplomatic relations, the National Museum live-streamed the Humboldt launch of Songlines in Berlin to Canberra.

The Museum’s Director, Dr Mathew Trinca AM, and Germany’s Ambassador to Australia, Dr Thomas Fitschen, spoke from the Museum’s Gandel Atrium as part of the live-stream launch, which also included a Welcome to Country in language by Ngambri and Ngunnawal custodian Paul Girrawah House.

Dr Mathew Trinca AM, Director of the National Museum:

This is a momentous occasion for the National Museum of Australia and our award-winning exhibition, Songlines: Tracking the Seven Sisters – one of the first major international shows to be displayed at the Humboldt Forum in Berlin. We are immensely proud to be sharing the foundational Australian stories with German audiences, who I know will be as captivated by this award-winning show as Australian audiences were, when the exhibition showed in Canberra.

It is fitting that Songlines is on display in Berlin’s newest cultural centre in 2022, as we celebrate 70 years of Australian–German relations. 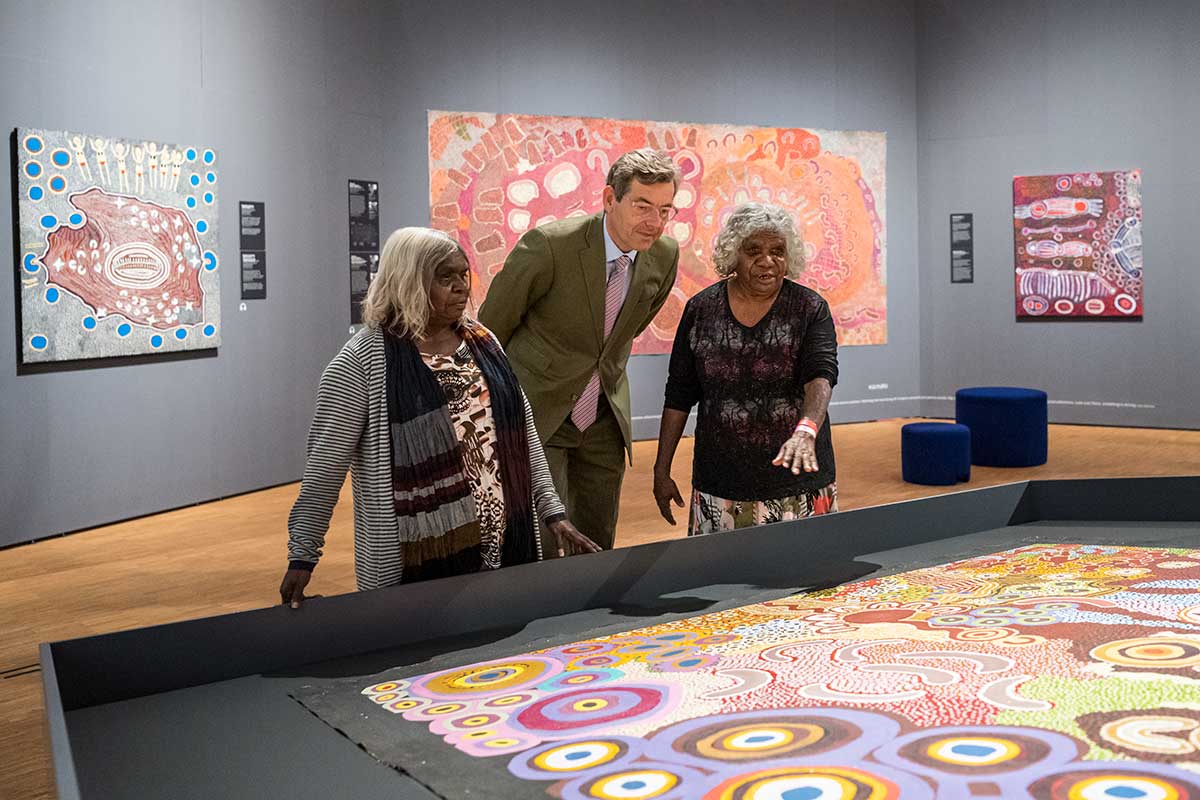 The opening of Songlines at the Humboldt Forum, Berlin, Germany

Songlines presents an extraordinary encounter with the art and cultures of Indigenous communities at the Humboldt Forum. The program is an important contribution to presenting this new site of international polyphony, trans-disciplinarity and experiential knowledge to a broad audience.

It also opens up new perspectives on how the Humboldt Forum can become an important site for self-determination, participation, transmission and mediation. Our visitors are invited to follow the trail of the Seven Sisters in the exhibition. We hope that they are as fascinated as we are by the stunning art and installations whilst ‘walking’ the songlines.

Songlines: Tracking the Seven Sisters is available to tour nationally and internationally.

The National Museum is committed to its key strategic goal of taking great Australian stories to the world. Developed in consultation with the traditional owners of the stories, this exhibition tells an ancient creation saga of the Australian desert.

Songlines is an Indigenous Australian narrative, and a global story, the equal of great oral storytelling traditions and epic poems throughout history. It showcases the unique cultural heritage assets of Australia.

Songlines will showcase Australian art and culture in the United Kingdom, Germany and France.

Songlines: Tracking the Seven Sisters is an international touring exhibition produced by the National Museum of Australia with the ongoing support of the traditional Aboriginal custodians and knowledge holders of this story.

Songlines was also on show at:

Explore more on the Songlines exhibition