The Royal Society of London

The history of science since 1660 is closely entwined with the story of the Royal Society. The origins of the Royal Society lie in an ‘invisible college’ of natural philosophers who began meeting in the mid-1640s to discuss the ideas of Sir Francis Bacon.

Its official foundation date is 28 November 1660, when 12 of them met at Gresham College after a lecture by Christopher Wren, the Gresham Professor of Astronomy, and decided to found ‘a Colledge for the Promoting of Physico-Mathematicall Experimentall Learning’. This group included Wren himself, Robert Boyle, John Wilkins, Sir Robert Moray and William, Viscount Brouncker. 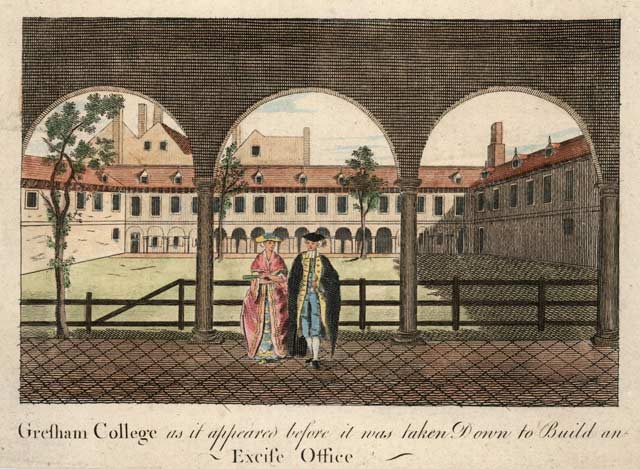 Gresham College, home of the Royal Society of London from 1660–1710

The Society was to meet weekly to witness experiments and engage in wide ranging discussions on what we would now call scientific topics, with only religion and politics not canvassed. The first Curator of Experiments was Robert Hooke, who devised experiments for the furtherance of knowledge on such topics as the nature of fire, air and water; light, sound and colour; motion and gravity; and the growth of plants.

It was Robert Moray who first told the King, Charles II, of the Society’s founding, and secured his approval and encouragement.

Charles II took great interest in the activities of the Royal Society from its inception. He was present at many of its early experiments and referred ‘forein Rarities’ to them for inspection.

The Society’s first historian, Thomas Sprat, wrote that the king ‘sometimes reproved them for their slowness of their proceedings ... at which reproofs they have not so much cause to be afflicted ... as to be comforted that they are reprehensions of his love, and affection to their progress’.

The Society was empowered by its 1662 Royal Charter to publish, and the first two books it produced were John Evelyn’s Sylva, or A discourse of forest-trees and propogation of timbers in his Majesties dominions in 1664, and Robert Hooke’s Micrographia, or Some physiological descriptions of minute bodies made by magnifying glasses: with discussions and inquiries thereupon in 1665.

The Philosophical Transactions included many of the papers read at the Royal Society, but Oldenburg also included scientific information he acquired from other channels including analyses of books on science.

The Society took over publication some years later and the Philosophical Transactions is now the oldest scientific journal in continuous publication.

Membership of the Royal Society

From the beginning, Fellows of the Society had to be elected, although the criteria for election were vague and the vast majority of the Fellowship were not professional scientists. The rules for Fellowship were relaxed for the nobility, with Charles II declaring himself patron, founder and, along with Prince Rupert, a Fellow.

In 1731 a new rule established that each candidate for election had to be proposed in writing and this written certificate signed by those who supported his candidature. These certificates survive and give a glimpse of both the reasons why Fellows were elected and the complex network of contacts between Fellows.

After initially residing at Gresham College, the Society moved several times as it outgrew its various accommodations.

In 1780 it moved to premises at Somerset House, an arrangement made by Sir Joseph Banks, who had become President in 1778 and was to remain so until his death in 1820.

Banks was in favour of maintaining a mixture among the Fellowship of working scientists and wealthy amateurs who might become their patrons and whose subscriptions would help keep the Society solvent in the absence of government funding.

This view grew less popular in the first half of the nineteenth century, and in 1847 the Society decided that in future Fellows would be elected solely on the merits of their scientific work.

This new professional approach meant that the Society was no longer just a learned society but also de facto an academy of scientists. The government recognised this in 1850 by giving a grant to the Society of £1000 to assist scientists in their research and to buy equipment. Therefore, a government grant system was established and a close relationship began, which nonetheless allowed the Society, with its staff of two, to maintain the autonomy essential for independent scientific research.

Over the next century the work and staff of the Society expanded. In 1967 it moved to its present location on Carlton House Terrace with a staff that has now grown to over 120, all working to further the Royal Society’s roles as independent scientific academy, learned society and funding body.

The Royal Society’s motto Nullius in verba — ‘Take no-one’s word for it’ — is an expression of the determination of the Fellows to withstand the domination of authority (such as in scholasticism) and to verify all statements by an appeal to facts determined by experiment.

The Latin words are taken from a passage of Horace in which the poet compares himself to a gladiator, who, having earned a peaceful retirement, is now free from control.

Nullius in verba was chosen to accompany the coat of arms granted to the Society by Charles II in the second charter of 1663.

The arms were described by Thomas Sprat as follows: ‘On a Field Argent a Canton of the three Lyons of England: For a Crest, an Eagle Proper on a Ducal Coronet supporting a Shield charged with the Lyons aforesaid; and for Supporters, two Talbots with Coronets on their Necks.’

The symbolism of the ‘Talbots’, a type of hound, lay in their hunting instincts: ‘for the Tenderness of their Scent, and the Quickness of Smelling, because they doe readily discover and find out’.

The highlight of the exhibition’s introductory section is a document titled ‘Directions for Sea-men bound for far voyages’. Formulated by Lawrence Rooke in 1661, the document lists the type of information sailors should try to gather during voyages of exploration — an indication that the Royal Society’s founders were intent on fostering the acquisition of knowledge from travels and expeditions far from their London base.

From its earliest years, the Royal Society’s roles as a repository for international scientific information and as an organisation for the testing and dissemination of scientific discoveries placed it at the forefront of new developments that reflected the interests of the era. One of those developments — and it was one in which the interests of the British state were closely involved — was the prosecution of voyages of discovery to the distant reaches of the globe. Accurate maps and details of trade routes were closely guarded state secrets, and the sources of information more generally available offered a mixture of mythical tales, accounts derived from poorly translated ancient texts, and geographical insights garnered from the Bible. So unreliable were the tales of sailors generally held to be, that the Casa da India (the Portuguese department of trade, established in Lisbon in 1500–01) required its pilots to swear on the Bible that the information contained within their voyage accounts and charts was true.

Rooke had been appointed professor of astronomy at Gresham College in 1652 and then professor of geometry in 1657. His ‘Directions’ was published in the Royal Society’s journal, the Philosophical Transactions, prefaced by the following statement:

It being the Design of the R. Society, for the better attaining the End of their Institution, to study Nature rather than Books, and, from the Observations, made of the Phaenomena and Effects she presents, to compose such a History of Her, as may hereafter serve to build a Solid and Useful Philosophy upon; They have from time to time given order to several of their Members to draw up both Inquiries of things Observable in forrain Countries, and Directions for the Particulars, they desire chiefly to be informed about. And considering with themselves, how much they may increase their Philosophical stock by the advantage, which England injoyes of making Voyages into all parts of the World, they appointed that Eminent Mathematician and Philosopher Master Rooke, one of their Fellowes and Geometry Professor of Gresham Colledge (now deceased to the great detriment of the Commonwealth of Learning) to think upon and set down some Directions for Sea-men going into the East and West-Indies, the better to capacitate them for making such observations abroad, as may be pertinent and suitable for their purpose; of which the said Sea-men should be desired to keep an exact Diary, delivering at their return a fair Copy thereof to the Lord High Admiral of England, his Royal Highness the Duke of York, and another to Trinity-house to be perused by the R. Society Which Catalogue of Directions having been drawn up accordingly by the said Mr. Rook, and by him presented to those, who appointed him to expedite such an one, it was thought not to be unseasonable at this time to make it Publique, the more conveniently to furnish Navigators with Copies thereof.

Rooke asked mariners to make compass readings, note their latitude and longitude (despite there being no reliable measure of longitude at that time), and keep a record of the tides, winds and weather encountered; record depths of ocean and coastal waters and make maps and ‘draughts’ of coasts, promontories, islands and ports; and observe all extraordinary celestial phenomena encountered. The recommendations were adopted by the Admiralty, with the result that there are now more than 250,000 logbooks, containing useful climatic data dating back to the 1660s, in British collections.

Rooke’s ‘Directions’ were followed by the Royal Navy’s officers throughout the age of sail, and they informed the practices of such notable later explorers as Lieutenant James Cook in HMB Endeavour and Matthew Flinders in HMS Investigator. It could be argued that the formulation of, and adherence to, these directions contributed to the success of the Royal Navy, which enabled Britain to emerge as Europe’s foremost maritime power and made the colonisation of Australia possible.

Fellowship of the Royal Society

The Society’s foundation is its Fellowship, which is made up of the most eminent scientists, engineers and technologists from the United Kingdom and the Commonwealth. Each year the Fellows elect 44 new Fellows and eight new Foreign Members, chosen for their scientific achievements. Today, the Fellowship of the Royal Society comprises over 1300 of the most distinguished scientists from the United Kingdom, other Commonwealth countries and the Republic of Ireland. Fellows of the Royal Society are elected for life and designate themselves through the use of the letters ‘FRS’ after their names.

Explore more on Exploration and Endeavour