2010: Election of Ken Wyatt, first Indigenous member of the House of Representatives 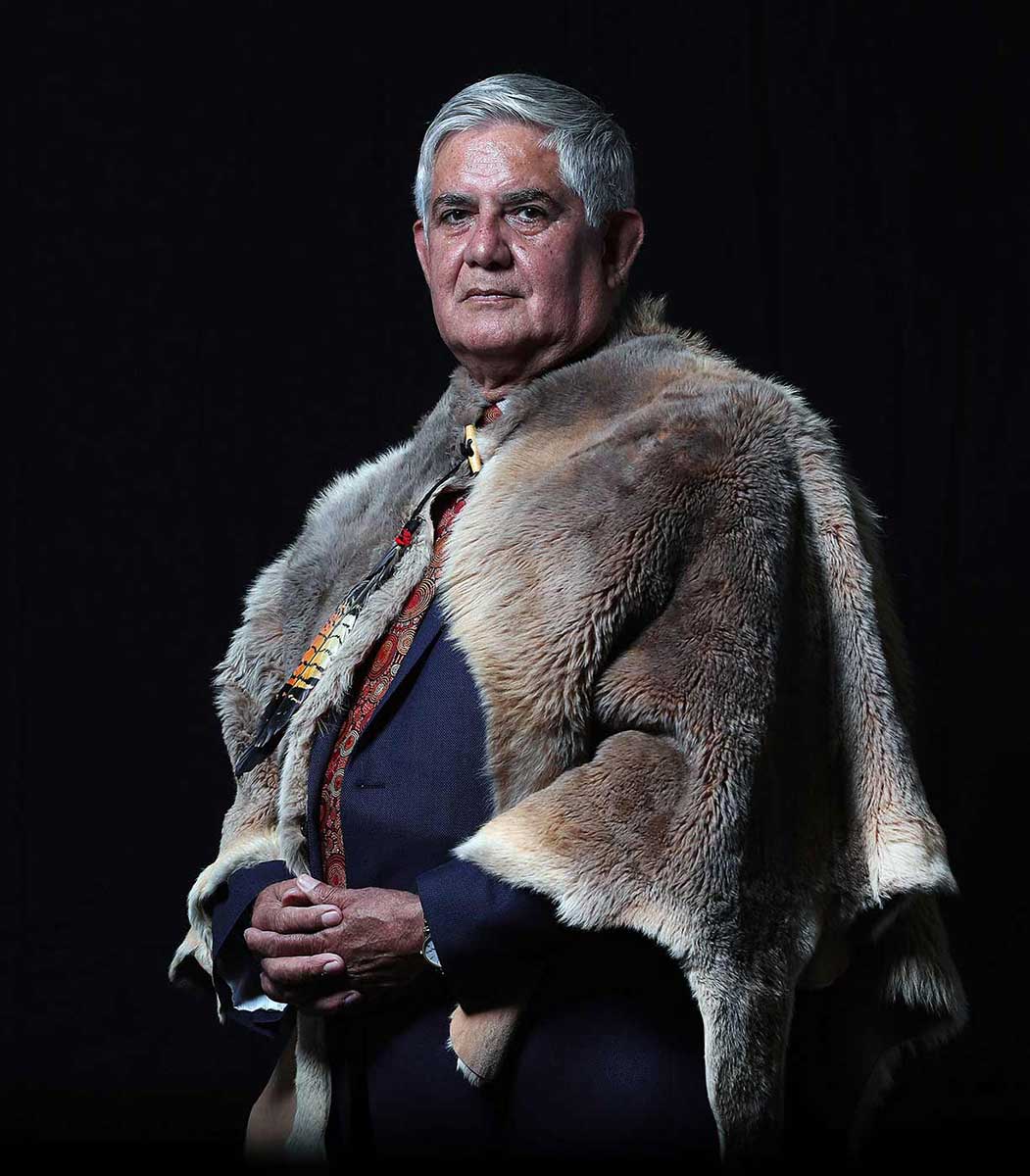 In 2010 Ken Wyatt became the first Indigenous member of the House of Representatives when he won the Western Australian seat of Hasluck for the Liberal Party of Australia.

Ken Wyatt after his emotional debut in parliament, 29 September 2010:

I was fine until I talked about my mother’s experience, and that did leave the lump in the throat … but I really wanted to thank Kevin Rudd for what he did … When I heard Kevin Rudd talk, I was sitting in my office listening to it, and one of my staff walked past and said, ‘Are you OK?’ And I said, ‘Why?’ And she said, ‘You’ve got tears flowing down your face.’

Ken Wyatt, the eldest of 10 children, was born in 1952 and raised on Roelands Native Mission Farm near Bunbury in Western Australia. Wyatt is of Noongar, Wongi and Yamatji heritage, and his mother was one of the Stolen Generations children.

From an early age Wyatt’s parents and teachers encouraged him to pursue an education. After completing a Bachelor of Education degree, he taught primary school for 13 years, then spent the next 15 years working in Aboriginal education and public health.

In 1996 Wyatt was awarded the Order of Australia in the Queen’s Birthday Honours list ‘for his contribution to the wider community in training and mentoring young people’.

In 2001 he received the Centenary of Federation Medal for ‘his efforts and contribution to improving the quality of life for Aboriginal and Torres Strait Islander people and mainstream Australian society in education and health’.

Wyatt has been a lifelong supporter of the Liberal Party of Australia. He was ‘attracted to its ethos of reward for hard work and individual effort’ and the party’s ‘small business, small government approach’ and joined the party ‘to try to influence the way in which the party responded to indigenous issues’.

In the 2010 Australian federal election Wyatt won the seat of Hasluck in Perth for the Liberals by a narrow margin. He made history as the first Indigenous member of the House of Representatives.

Shortly before his win was confirmed, Wyatt said, ‘he would be honoured to become the first Aboriginal in the ‘people’s house’ … It’s like breaking the brown glass ceiling’.

Wyatt was sworn in as the member for Hasluck at the opening of the 43rd Parliament on 28 September 2010. The following day he delivered his first speech to parliament. On both occasions he wore a traditional booka (kangaroo-skin cloak) presented to him by Noongar Elders. 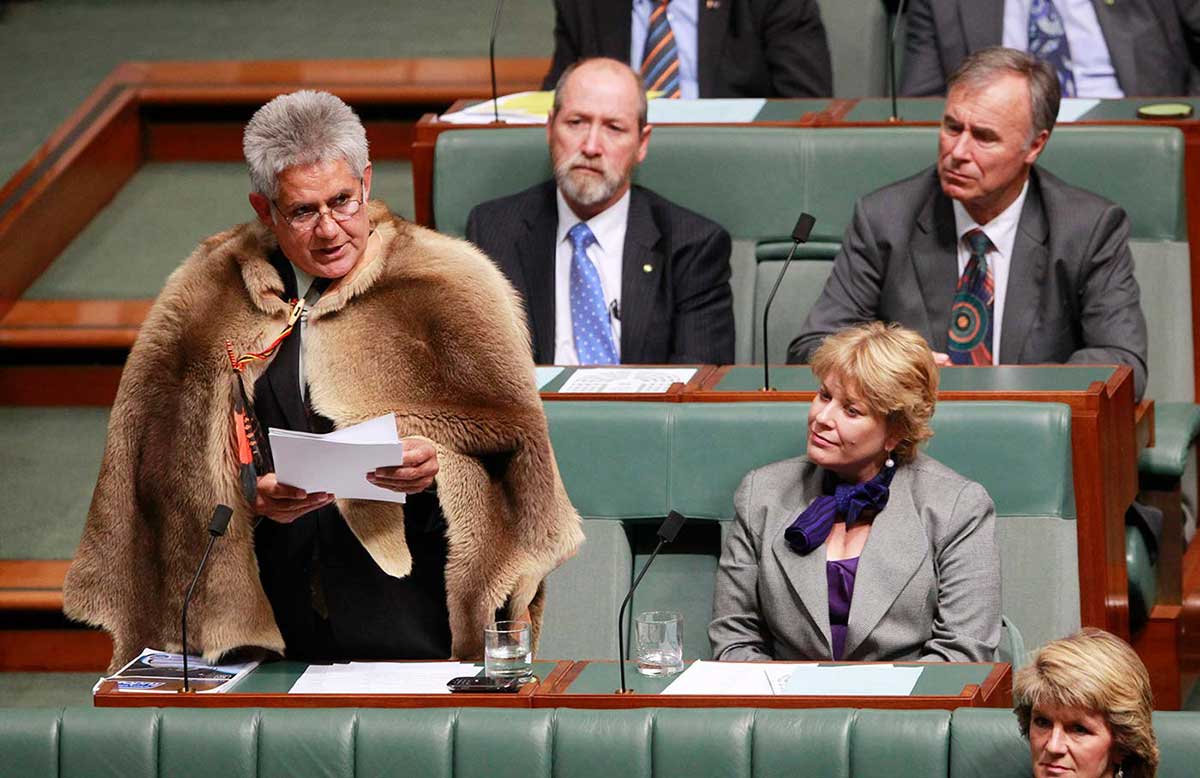 In his speech, Wyatt said:

It is with deep and mixed emotion that I, as an Aboriginal man with Noongar, Yamitji and Wongi heritage, stand before you and the members of the House of Representatives as an equal.

I shed tears for my mother and her siblings … On behalf of my mother, her siblings and all Indigenous Australians, I, as an Aboriginal voice in this chamber, say thank you for the apology delivered in the federal parliament and I thank the Hon. Kevin Rudd for honouring his commitment to the stolen generation.

Wyatt reaffirmed his commitment to representing the people of Hasluck and advocating for Indigenous Australians. He called on all MPs to act as ‘pathfinders’ and ‘accelerate the change needed to improve outcomes for future generations’.

His speech received a standing ovation from both the government and opposition benches and from the public galleries.

In the 2013 federal election Wyatt was re-elected as the federal member for Hasluck with an increased majority. He was the first person to hold the seat for a second term.

In September 2015 Prime Minister Malcolm Turnbull appointed Wyatt Assistant Minister for Health, making him the first Indigenous frontbencher in the Australian Parliament. Wyatt later described his appointment as ‘surreal’ and ‘a privilege’:

Any Indigenous Australian has the capacity and capability of achieving their aspirations. There are a whole lot of barriers that impact on each of us individually, but you work to rise above those. And so the symbolism of being on the frontbench is a tremendous one.

In February 2016 Wyatt became Assistant Minister for Health and Aged Care. In the 2016 federal election he retained the seat of Hasluck with an increased margin, securing his third term in parliament. 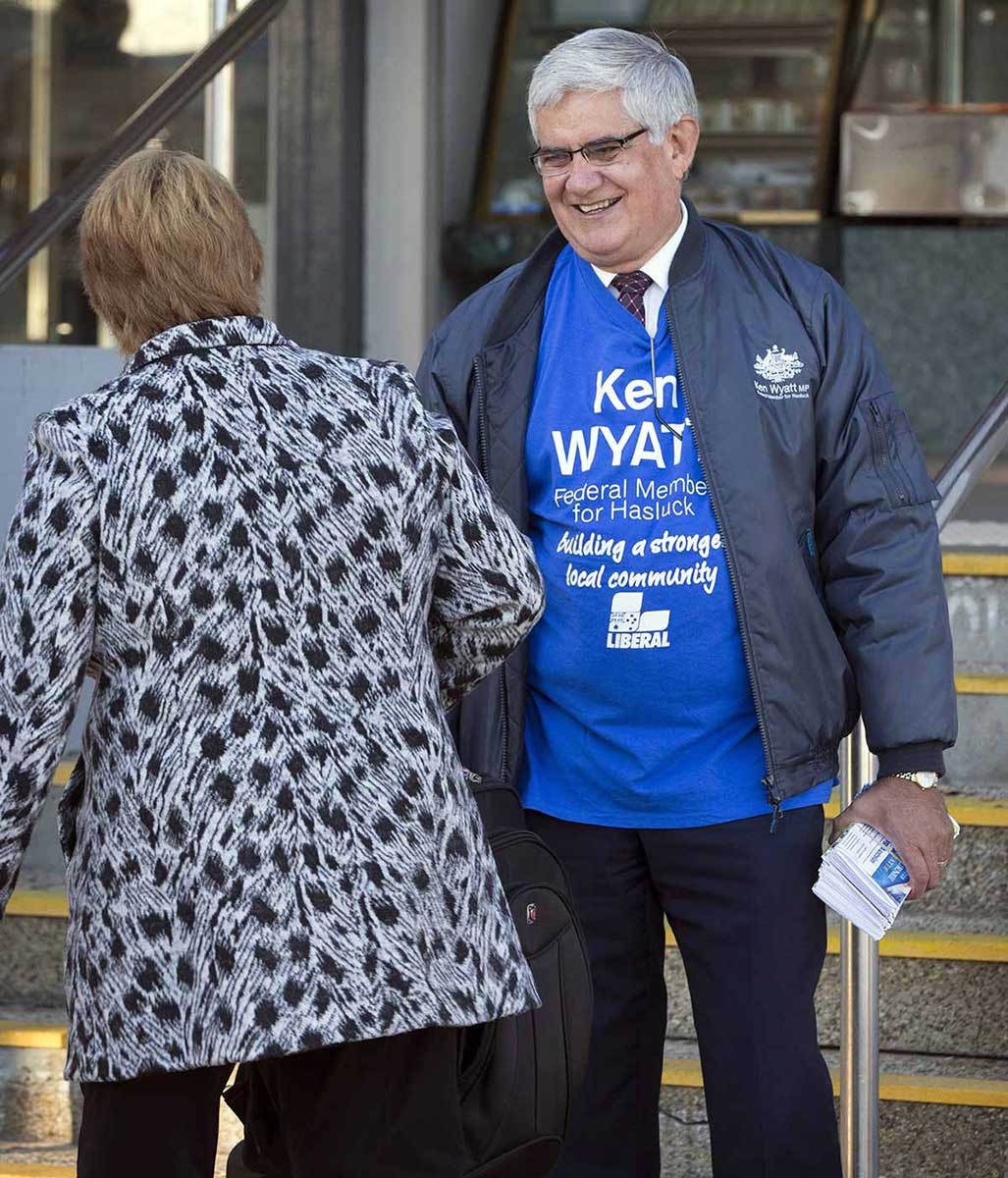 At the 2019 Australian federal election Wyatt again retained his seat with an increased majority, securing a fourth term in parliament. Prime Minister Scott Morrison appointed him Minister for Indigenous Australians. In May that year Wyatt tweeted:

In 2021 Ken Wyatt was one of 5 Indigenous federal parliamentarians. The others were Linda Burney, Pat Dodson, Jacqui Lambie and Malarndirri McCarthy. He remains committed to holding a referendum to recognise Indigenous Australians in the Constitution.

He has also called for a new community-based approach to closing the gap of Aboriginal disadvantage in health, education and employment. In his response to the Australian Government’s Closing the Gap Report 2020, Wyatt said:

We will continue to work every day to get more children to school; to support pathways into long-term employment; to address and reduce suicides … right across this nation; and to empower and give a voice to those who need it most. 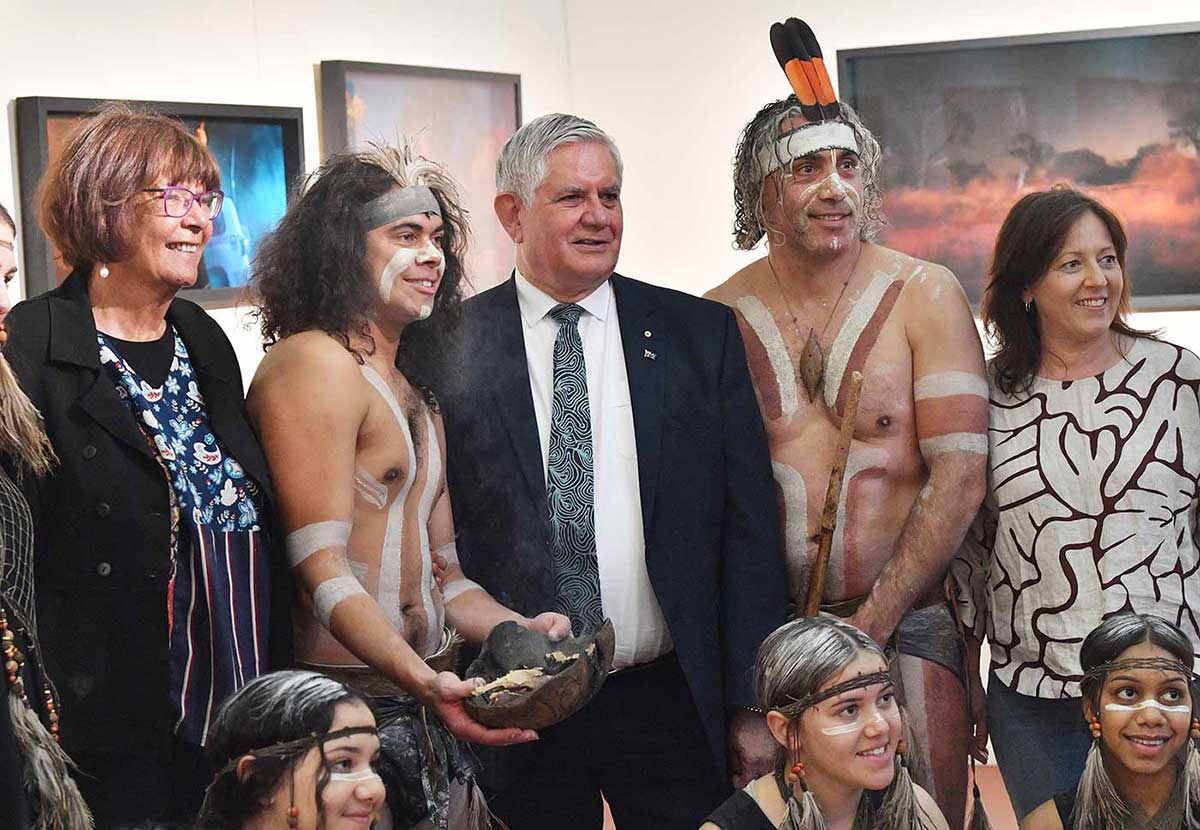 As Minister for Indigenous Australians, Ken Wyatt poses for a photo with Kaurna Country performers at the meeting of the Joint Council on Closing the Gap at Tandanya National Aboriginal Cultural Institute, Adelaide, 23 August 2019

Swearing-In Holy Bible belonging to Neville Bonner encased within a boxA black covered bible encased within a red and gold box with black printing, and handwritten text on it. The bible has two dried holly leaves resting on it.
On display