3.2 The storage environment – RH and temperature

In the last decade, museum professionals have given considerable thought to the environmental conditions needed to safely store museum collections (Serota 2008; Jones 2008; National Museum Directors’ Council 2008; Grattan & Michalski 2017; Getty Conservation Institute 2018; American Institute for Conservation 2019; Pagliarino 2019). The traditional, rigidly defined parameters for RH and temperature laid down in the later part of the 20th century (Thompson 1990) are now being reexamined in the light of their value for protecting objects, the energy they consume and the cost required to maintain them.

This is not a cost-cutting exercise at the expense of the safety of the objects or an ill-considered desire to be ‘green’, but a realistic assessment of what environmental conditions are essential to prevent further damage. ‘Heritage science and conservation practice have developed two general approaches to providing the necessary evidence to inform climate specifications; (1) analyses of the historic climates to which the objects have been ‘acclimatised’, and (2) analysis of the physical response of the materials and objects to relative humidity (RH) and temperature fluctuations’ (Kozlowski 2018).

By applying the first approach of looking at the historic climates to which the remains have previously been acclimatised, it is clear the vast majority of the remains to be held in the National Resting Place will have already been exposed to temperature and RH fluctuations greatly in excess of anything likely to be experienced in the proposed Mitigated Store Room, even if the traditional environmental parameters are relaxed from the standard 20°C + or −2°C and RH 50% + or −5% (AIC 2019). Most of the skeletal and naturally mummified remains to be housed in a National Resting Place will have been through traditional ceremonies for the dead, including primary and secondary burials, deposition in a cave or tree, smoking over a fire, or post-mortem decoration or modification. Any physical damage likely to be caused by exposure to such extremes of temperature and RH, repeated cycling through those extremes, saturation, freezing and biological attack will have already occurred before they were removed to a collecting institution.

By applying the second approach of looking at the physical responses of the remains to RH and temperature fluctuation, it becomes clear that some types of remains require a more tightly controlled environment than others. Given that the remains to be housed in the National Resting Place will have come from universities and cultural institutions and, if returned from overseas, will have passed quarantine requirements, it is unlikely that any active pests, moulds or active biological degradation will be present when they enter the Receipt Space [6]. However, any exceptions to this should be identified and treated as part of the process of preparing the remains to go into the Storage Room. The inclusion of a basic Conservation lab, a freezer and a UV treatment cabinet should allow for all of the predictable treatment requirements to be carried out (see Section 3.6).

A well-managed Integrated Pest Management Program, Vulnerable Remains Check Program and a storage area built to reflect ‘best practice’ in passive design should ensure that these issues do not recur for remains once they enter the Store.

Skeletal remains, stable mummified remains, burial packages, grave goods and hair, all of which make up the majority of remains, will have experienced temperature and RH fluctuations well outside the range likely to be found in a storage area of the type outlined in this paper. Such remains can safely cope with a relative humidity between 40% and 60%, with a daily fluctuation of no more than 10%, and a temperature range of 10–25°C without any further physical damage occurring. Casts are also able to be kept safely under these conditions. 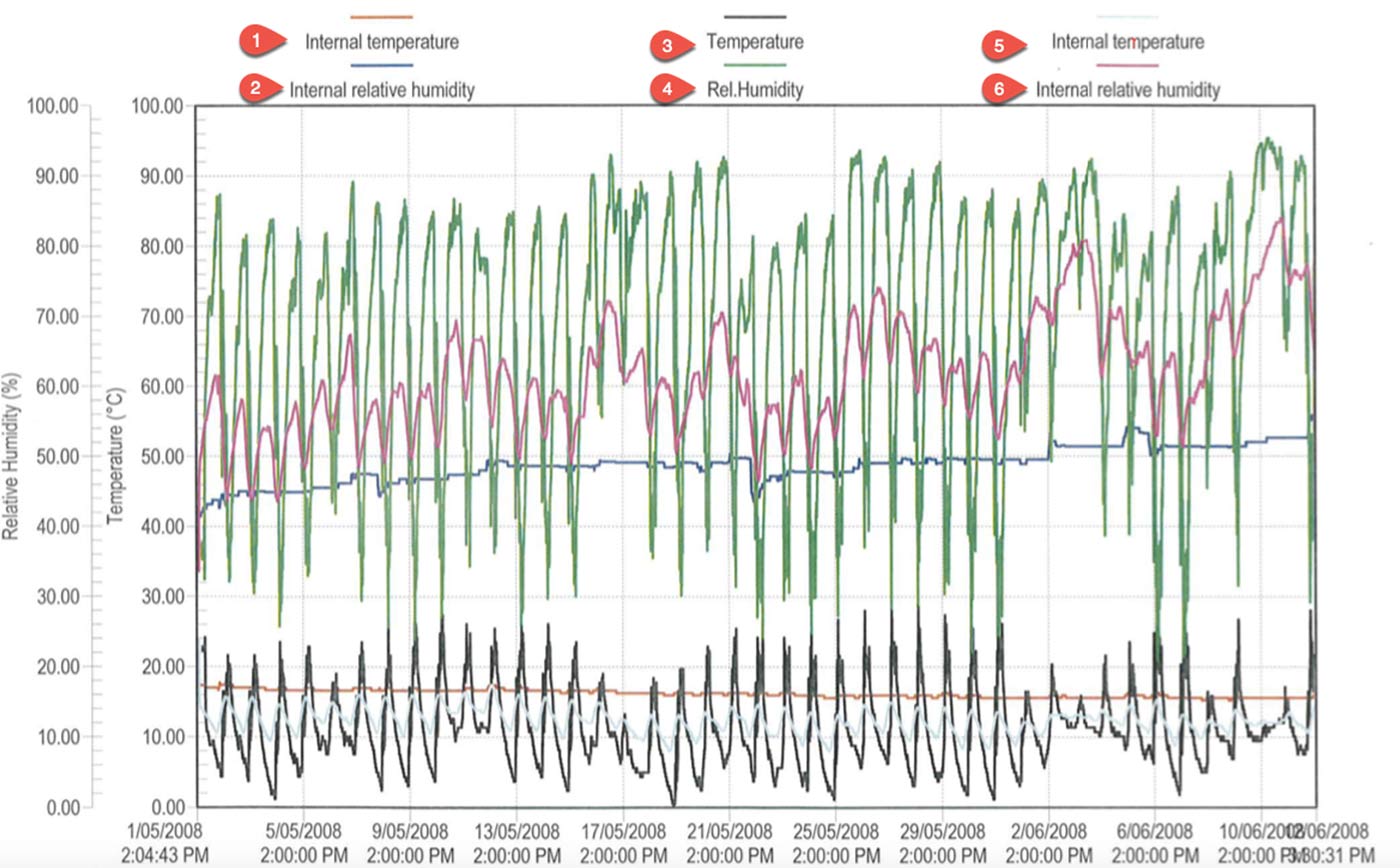 This graph compares the temperatures and relative humidities of the air outside the warehouse and inside the warehouse with the Mitigated Store during the period 1/5/2008 to 14/6/2008. Despite fluctuations outside the Store the temperature remains constant at c.18°C and the RH shows only gradual seasonal drift well within the environmental parameters set for the Store.

As can be seen from the graph above, fluctuations of temperature in a Mitigated Store are likely to be minimal. The extension of the minimum acceptable temperature range from 15°C to 10°C is based on a personal communication from Nicki Smith, Senior Conservator at the NMA. Lower temperatures, should they occur in a Mitigated Store, are unlikely to be harmful to remains and they reduce the likelihood of chemical reactions and biological activity.

While damage from previous exposure to extremes of RH and temperature will already have occurred, Ancestral Remains will be vulnerable to further damage from vibration. Consequently, it is important that vibration be minimised. Delaminating bones and loose teeth are particularly vulnerable to vibration. A facility constructed on a concrete slab laid directly onto the ground provides the best structural vibration minimisation. The choice of storage system can also assist with vibration minimisation, e.g. the criteria for the choice of a compactus should include the design requirement that vibration is dampened when the shelves are being moved.

The exceptions to the conditions outlined above are Ancestral Remains which have been modified after removal from their original context or those that have been mummified but continue to degrade. Storage conditions for these are:

Storage requirements are variable depending on the nature of the preserving fluid, however the variations relate to managing hazards from off-gassing of those solutions. The environmental requirements are similar to those in the General Storage Area but the remains should be held in a chemical storage cabinet vented to the outside with trays to contain possible spills (see the Section 3.6.2 Conservation Treatment/Isolation Room).

If only the remains are of concern and if all the components can be safely held in closed cabinets in the general storage environment then the objects should be held there. If there are other materials in the object that are actively degrading and considered a threat to the remains under general storage conditions (e.g. corroding metal or unstable, non-human biological components), or if it is considered important to provide the best possible storage for all of the components, some of which have very specific requirements, an appropriate environment could be created by placing each set of remains in a moisture-proof container with desiccants or soluble salts conditioned to the appropriate RH (Thompson 1990, pp. 107–114). These remains should be included on the Vulnerable Remains Check Program list. It would be best to hold all the remains that require checking in the same area in the General Storage Area unless this is culturally inappropriate.

If the metal used in the articulation is actively corroding (possibly due to more than one metal being used in the frame), cannot be stabilised and has become fixed to the remains, then it may be necessary to ensure that the RH is kept low (c.40%) to ensure that swelling due to corrosion will not cause the skeletal elements to crack or break off (Bachmann 1992, p. 132). This would be an unusual situation and would always be a compromise between what is best for preserving the bone and what is necessary to arrest the corrosion. Usually a stable storage environment would prevent metal corrosion. Because only a small number of remains are likely to be involved, their requirements could be met by placing each set of remains in a moisture-proof container with a desiccant or soluble salt solution. These remains should be included on the Vulnerable Remains Check Program list.

However, if there is a large number of remains of this sort, an alternative would be to design a large, sealed cabinet similar to the one described above to house these remains.

Some Ancestral Remains may have been given pest treatments which are now considered to constitute a hazard to those handling them, e.g. arsenic powders, or may have been examined in a way that leaves a chemical residue, e.g. the use of mercury to find the volume of internal spaces. Usually these can be managed by housing the remains in standard boxes with clear labels identifying the hazard. Once this is done they can be kept in the General Storage Area. If necessary the box should be lined with a barrier film and sealed to prevent dust or fumes from escaping.

It is essential that the nature of any hazard be recorded on the database so that anyone making planning decisions about access has the necessary safety information.

[6] It is possible that some moulds may reactivate or bone fat may continue to seep from remains that had never been buried. Moulds, even dead mould, can cause health problems for staff, and the Occupational Health and Safety protocols should be followed when working with these remains.