This suitcase was used to transport the remains of a human cremation from Lake Mungo to the Australian National University, Canberra, in 1969. It belonged to John Mulvaney, a pioneer of Australian archaeology, who played a central role in proving that the arrival of humans in Australia was earlier than had previously been accepted. 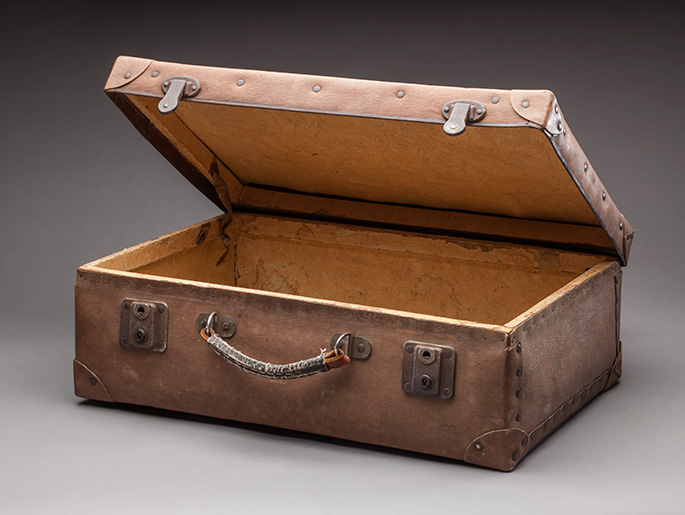 The suitcase owned by John Mulvaney, that was used to transport the remains of a human cremation from Lake Mungo to Canberra in 1969. National Museum of Australia

Mulvaney and Rhys Jones, another pioneering archaeologist, accompanied the geologist Jim Bowler to Lake Mungo in south-western New South Wales, to examine bones that Bowler had earlier discovered. Erosion had exposed the bones in their resting place in an ancient dune on the lake’s edge and they were at risk of being destroyed by sheep grazing nearby. The team decided to take the bones back to Canberra in Mulvaney’s suitcase, which was the only container available to them.

Those bones are now recognised as belonging to a woman, Mungo Lady, who was cremated more than 40,000 years ago. The evidence of cremation is the earliest record of such a ritual from anywhere in the world. This discovery, therefore, is of major significance in terms of the origins of modern human behaviour and the peopling of Australia.

John Mulvaney later played a pivotal role in ensuring that Lake Mungo was protected as a national park, and that the Willandra Lakes were listed as a World Heritage site in recognition of their natural and cultural significance.

In 1992, Mungo Lady was returned to Lake Mungo and the custodianship of the Paakantji, Mutthi Mutthi and Ngyimpaa peoples, the traditional owners of the Willandra Lakes region. This ceremonial return marked an important moment in the relationship between Australian scientists and the Aboriginal groups affected by their research.

Whom did the suitcase belong to, and what was it most famously used for?

What was significant about the bones that geologist Jim Bowler found at Lake Mungo?

What was the significance of the ‘hand-back ceremony’ held at Lake Mungo in 1992?