Made in about 1807, this is one of the oldest dresses in the Museum’s collection. Widow Ann Deane brought it from England to Australia in 1838. Then more than 30 years old, it became part of a large collection of clothing and keepsakes that would be added to and cherished by five generations of the Deane and Faithfull families.

We think Ann wore it on the day she married farmer and landowner Thomas Deane in 1807 in Upton Pyne, Devon. With its fine embroidery and hint of a train, this simple, elegant style of dress was a popular bridal choice. Its high waist, bib-front and column-like skirt would have been more comfortable than styles worn worn during the 18th and 19th centuries.

From the 1820s, free settlers from Britain began arriving in Australia. Ann Deane, her children – Ann, Mary and Robert – and grandson Edgar, arrived in Sydney from Barnstaple, Devon, in 1838.

The social and economic instability caused by increasing industrialisation drove many families, like the Deanes, to leave England in search of wealth and opportunity.

Along with the everyday items Ann Deane need to settle in Australia, she also brought dresses and other garments that would be passed down through the family.

It is unlikely this dress would have been part of Ann’s everyday wardrobe when the Deanes arrived in Sydney. This style was popular between 1805 and 1810, and the slight train and beautiful vertical embroidery suggests it was not everyday wear.

Pale coloured muslin gowns were often reserved for special occasions, as the fabric was difficult to keep clean.

It is unlikely Ann wore this dress in Australia but instead kept it as a family heirloom. Ann Deane, daughter Ann and nephew Edgar, moved to Springfield station when Mary married pastoralist William Pitt Faithfull.

Ann Deane’s will, dated July 1845 signalled her intention to pass her wardrobe on:

Alas I have little to give yet I hereby give devise and bequeath unto my daughter Ann Deane all and everything I may die possessed of namely my wearing apparel. 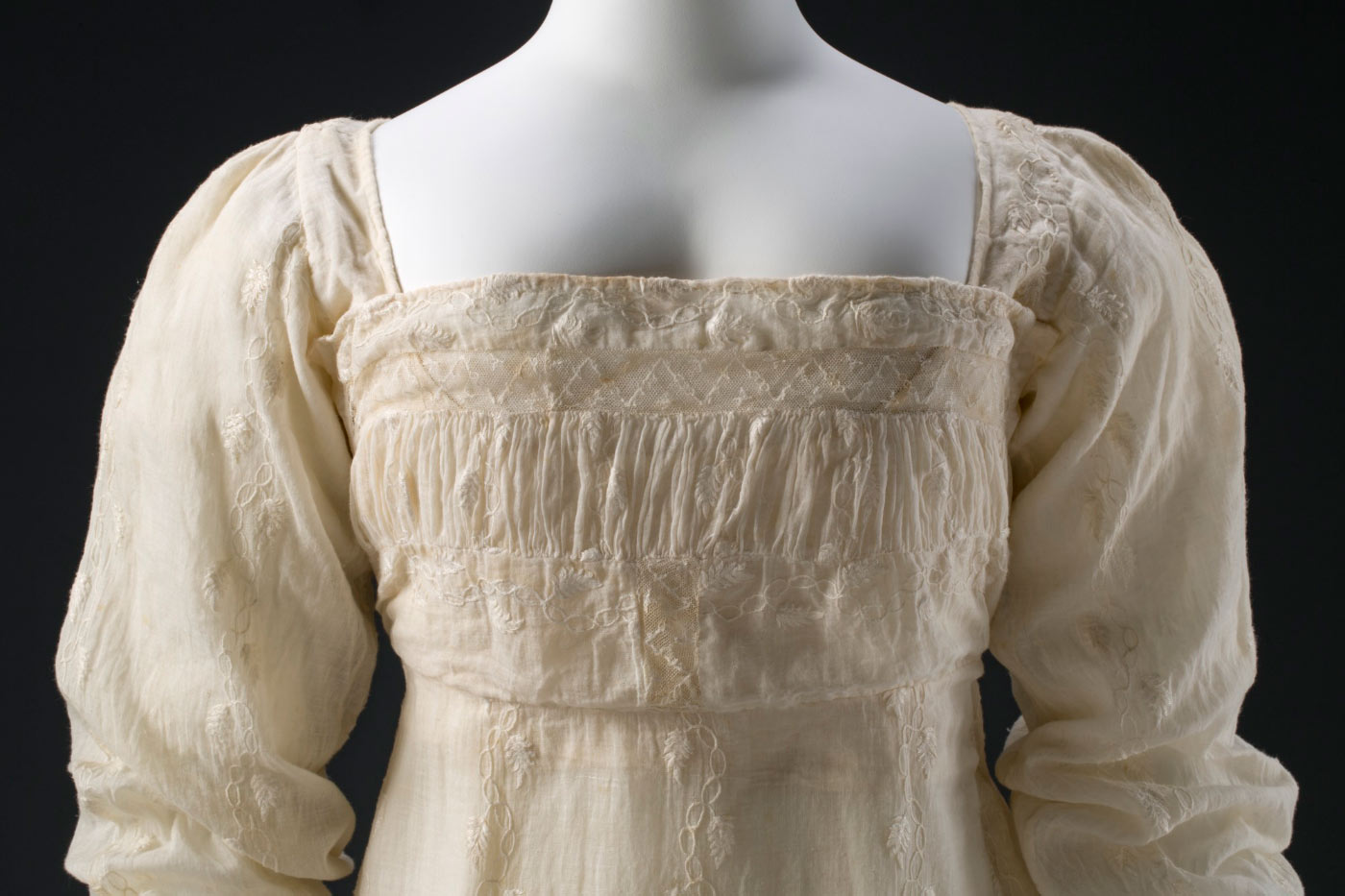 While some women were discarding restrictive corsets at this time, it is likely that Ann wore several layers under her dress. Her undergarments would have included a shift, petticoat and, to ensure correct posture, a stay, which was a soft corset that sometimes included a strip of wood, bone or metal known as a ‘busk’ running down its centre.

Soft, floating muslins in whites and creams were a popular choice in the early 19th century. Muslin was first exported from India and later produced in vast quantities in England.

Clothing made from pale coloured fabrics, including muslin, was often a status symbol for regular wearers, as the garments soiled easily and were worn only by women who could afford to wash or replace them.

One-piece cream muslin dress with embroidered leaf patternA one-piece cream muslin dress with an embroidered leaf pattern. It is full length, with long sleeves, a high waist, and a train. The front-opening bodice has a top layer which wraps across, and a bottom layer which covers only the bust. The bodice has been altered. The shirred band across the centre front has an insertion of ma...