We park beside a wide steel gate in the northwest corner of North Taylors. The paddock drops gently down to the south, green and cold, a thin afternoon light.

Garth Strong, Graham’s father, suggests we walk diagonally through the paddock, downhill. He mentions a phonecall received a few hours ago, from a farmer in the snowy uplands of the Pacific northwest, near the Canadian border. Garth had met him during an agricultural tour of the United States, and they’d stayed in touch. Today, the weather there was extraordinarily, unseasonably hot, the farmer said. On the way to pick up Garth, I’d heard reports of 19 firefighters dead in Arizona, firestorms, a vicious heatwave. Here, the air is cool, moist, barely shifting. 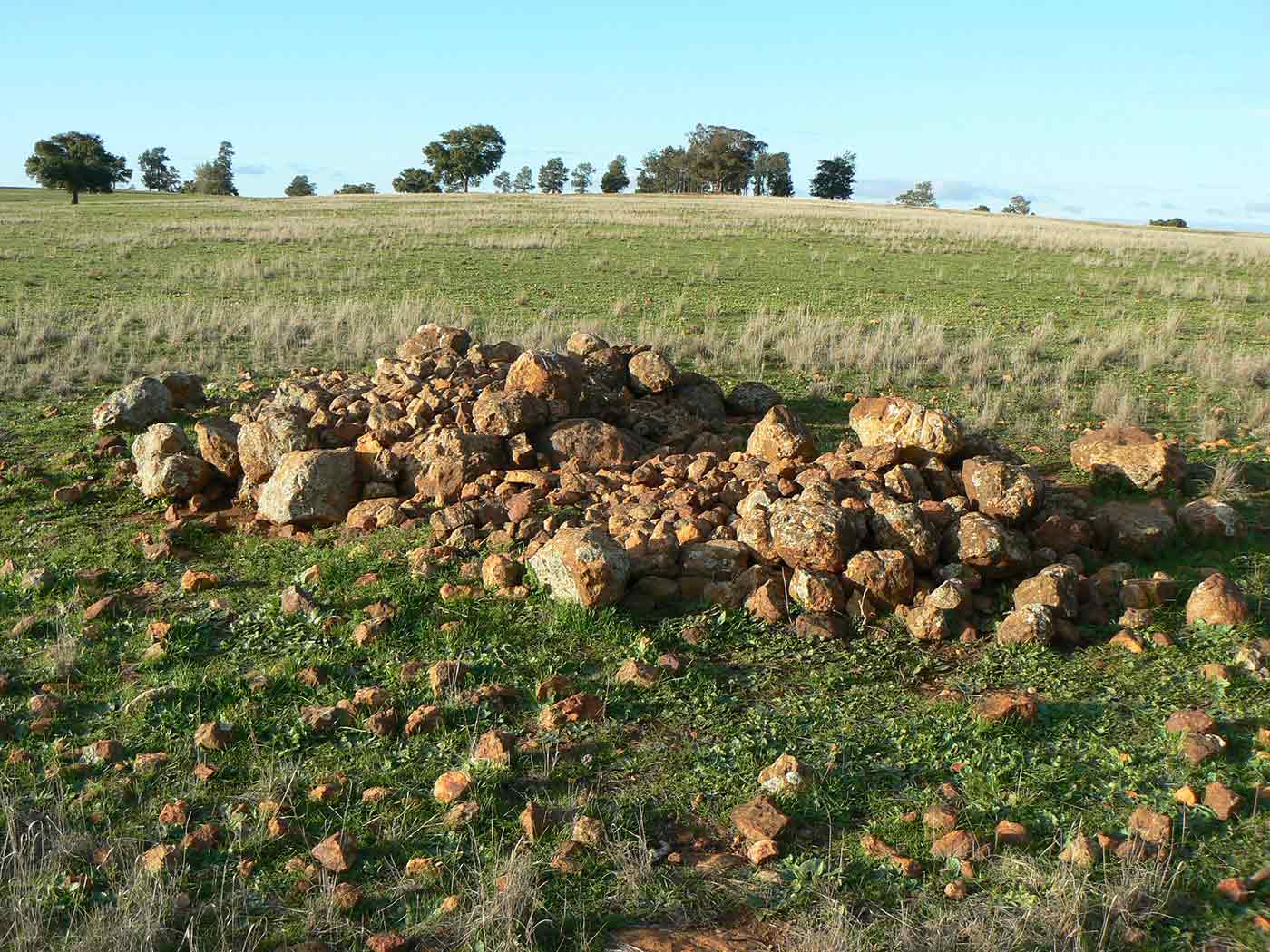 ‘It would’ve been cropped, quite a lot’, Garth replies to my question of the paddock’s history. About 25 years ago, Garth explains, after they’d bought Oakvale from his neighbours, the Taylor family, he’d removed internal fences to make larger paddocks, including North Taylors. The dam in the paddock at the bottom of the slope, on the southern boundary, would’ve serviced four smaller enclosures, with fencelines converging in the mud and water of the constructed depression. Larger paddocks gave efficiencies in the broadscale sowing and harvesting of wheat and canola.

Towards the middle of the paddock, we stop beside a wide pile of stones, large and small, patterned with lichen.

‘They’ve probably been collected when they cleared the country’, Garth says. ‘They’ve just picked up rocks and thrown them in heaps. On these gravelly ridges people would’ve gone around and picked up the stones and put them in a dray, and then tipped them into heaps.’ I imagine horses and trees, the Taylor family, and dray wheels, their narrow iron rims pressing into earth.

We approach a pair of kurrajong trees, foliage dense, with scarred limbs recording histories of lopping and regrowth. ‘The Taylors used to lop them’, Garth recalls. He remembers lopping kurrajongs on Arcadia, his farm neighbouring Oakvale, with a chainsaw during a drought in the 1960s: ‘The sheep like them, and they’d come running up when they heard the chainsaw start. They’d eat them right down to the twigs. That was one of the assets if you were selling a property — plenty of kurrajongs, you’ve got all that reserve fodder around. But you’re not going to feed a lot of sheep on them.’ 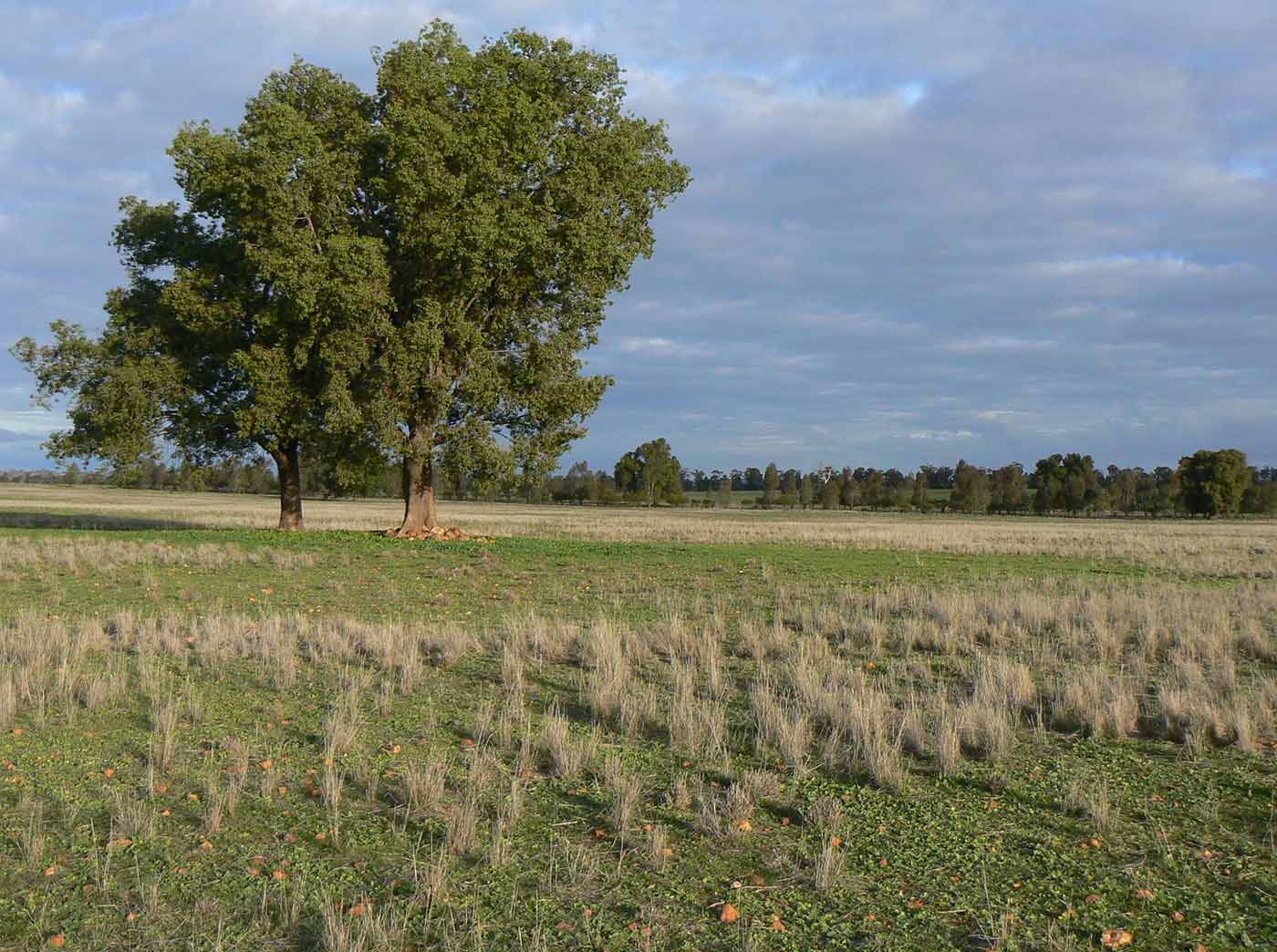 Inside the tree belt on the southern fence line, we look across at a mob of about 200 merino ewes and their bleating lambs, born amid the shelter of grass tussocks in North Taylors in May and June. They look well fed, flourishing. I ask about the season. ‘It was probably the driest spring, summer and autumn we’ve had for many years’, Garth explains. ‘There was very little spring rain, and usually if you don’t get spring rain you’ll get summer rain, but we didn’t get the summer rain either. And normally you get enough rain to sow by the middle or end of April. Didn’t get that either. Really, the good rains were a month late, end of May. A lot of people sowed their crops dry.’

Until the turn of the century, Garth says, autumn and winter rain bands regularly spread east from southwest Australia. Like the recent May rainfall, they tend now to arrive from the northwest, the product of warming, tropical seas. ‘There’s definitely a change to the systems’, he remarks. ‘Before, if you got a bad year, there’d only be one, and the next year would be alright. Now there’s quite a few more bad years than good years.’

We continue walking. Talk turns to issues of food insecurity. ‘Things could get really nasty’, Garth says. ‘We’re running out of arable land.’ Here in North Taylors, the maintenance of ground cover, and a refusal to overstock, is allowing the slow building of soil. Throughout most of rural Australia and the world, where farming practices are less ecological and more industrial in style, wind and water erosion is steadily undermining the productive capacity of land. ‘When people are out sowing their crops dry there’s a fair bit of dust in the air, and then you get wind through the paddocks.’

I mention Richard Manning’s book Against the Grain, and the author’s observation that modern crop species are descended from a narrow range of annual plants specialised in colonising land stricken by fire or flood. Instead of pushing roots deep into the earth, as do most perennials, the ancestors of wheat, maize and other common crops invested resources in growing large, easily detached, portable and long lasting seeds, designed to exploit ravaged terrain [1]. To grow crops today, wide ploughs pulled by powerful tractors repeatedly, year after year, impose catastrophe across farmland. ‘That’s a good way to explain it’, Garth chuckles.

As we head uphill, along the eastern fence line, I ask Garth about the local Landcare group. His wife Jan has just resigned as secretary, he explains. Active in the 1990s, the group has lost members and energy, a consequence of expanding farm sizes, and associated depopulation.

We talk about the ‘eyes-to-acres’ ratio, a concept developed by writer and perennial crop breeder Wes Jackson. ‘You get a huge, great big place’, Garth says, ‘and you’ve only got one or two people on it, you’re not going to be able to manage it, because there’s going to be areas where there’s a problem starting and nobody will notice until it’s too late.’

Expanding acreages and a growing reliance on sophisticated technologies distance people from the dynamic patterns of productive terrain. ‘Most of the young people now, they probably hardly ever get their feet on the ground. They’re driving around in some huge machinery, they wouldn’t walk the paddocks.’ 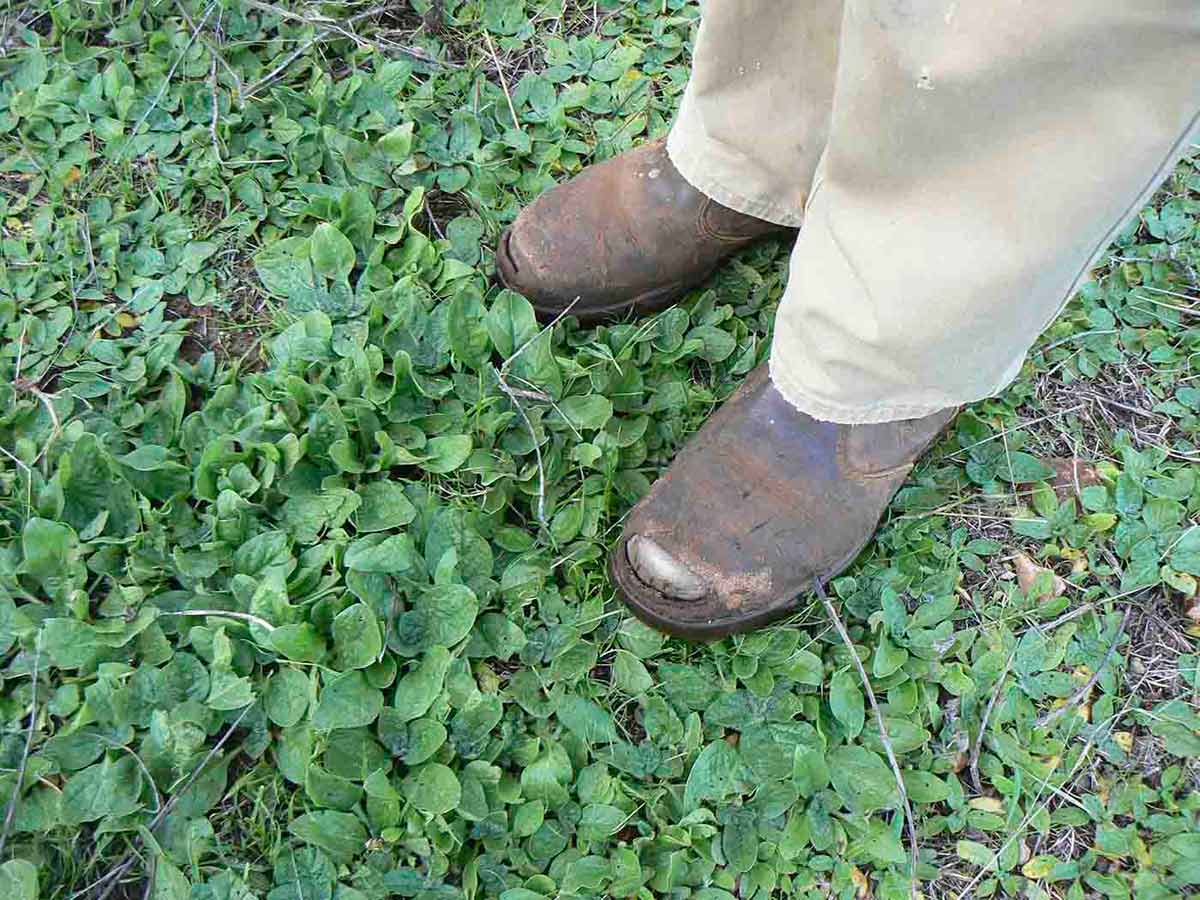 Garth Strong stands on a vigorous mat of Paterson's curse

We stop to inspect an especially thick patch of Paterson’s curse, rosettes crowded together between grass tussocks. During the dry spring, summer and autumn, sheep in North Taylors had grazed the pastures low, enabling the wintertime abundance of the plant commonly considered a useless, even dangerous weed. ‘It’s not all that bad’, Garth explains. ‘They’ve got a tap root and they get down into the soil, loosens it up. All plants have a purpose.’

Under a clump of white cypress pine lies a rusting device. Garth ducks under branches and picks up the handle, explaining its purpose. A scoop pulled by a horse, later a tractor, Garth expects that members of the Taylor family used it in the dam at the bottom of the slope, to scrape out years of accumulated silt. Before the introduction of chemical farming methods in the 1980s, which reduced tillage and retained stubble, heavy storms regularly delivered vast quantities of top soil into dams and streams. Garth points out the low, snaking form of a contour bank, built generations ago to slow runoff and stop erosion. 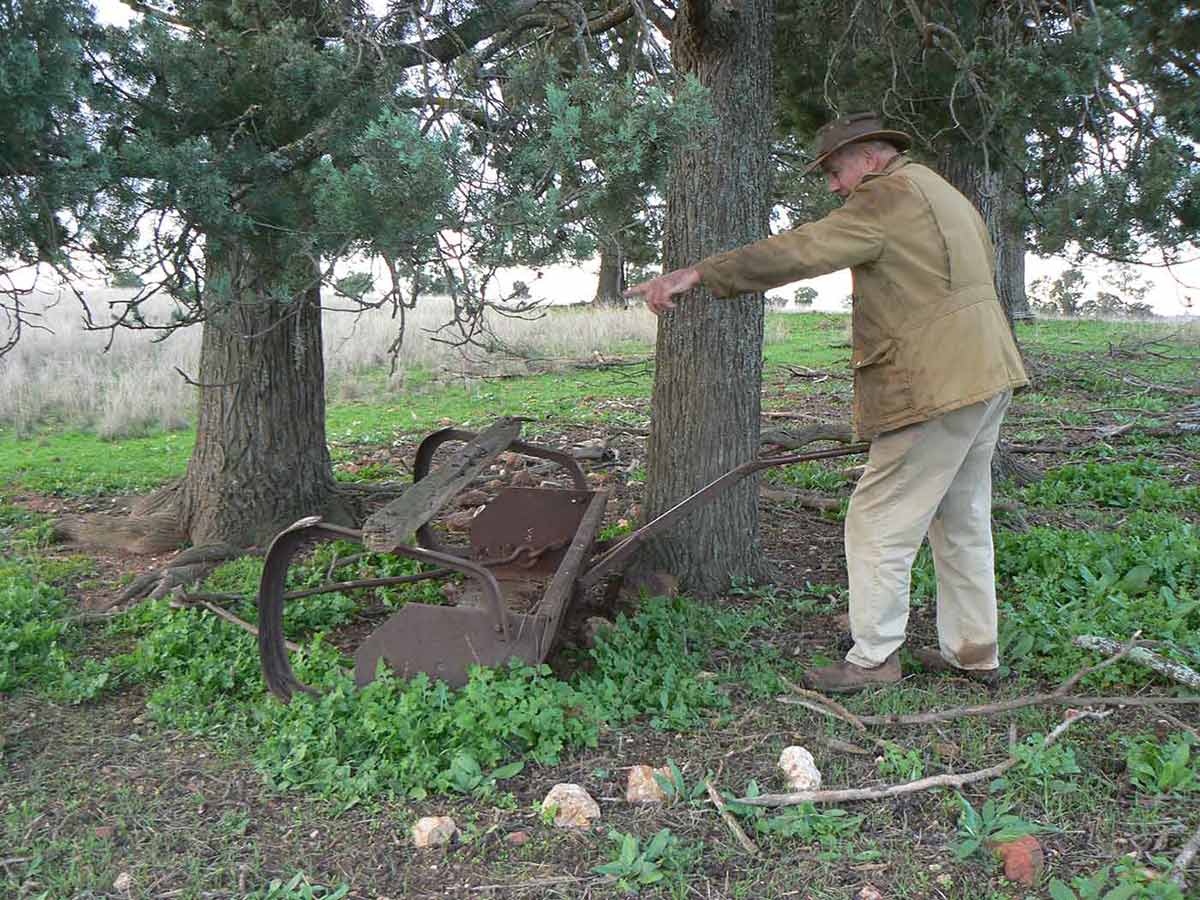 Garth Strong demonstrates the use of a dam scoop

In preparation for autumn sowing, to preserve soil moisture, farmers maintained a ‘bare fallow’ by ploughing the ground repeatedly, starting in August. ‘Whenever it rained you’d go out and work it up again’, Garth says, ‘get it a bit finer, to make a seed bed, and kill summer weeds.’ Disc ploughs, harrows, tractors, churning and grooming. ‘You’d end up with a soil that was really fine, especially if you did a lot when it was fairly dry. It was like bloody talcum powder. And then it’d set like a brick. Next year, when you burnt the stubble and ploughed the paddock up, the soil would just come up like rocks. Then you’d have to hammer them even harder to break them down and make them fine. You’d end up with this really hard soil, terrible stuff.’

We walk up the slope, towards the gate and car, boots on leaves and tussocks, across earth resting, healing, awakening. 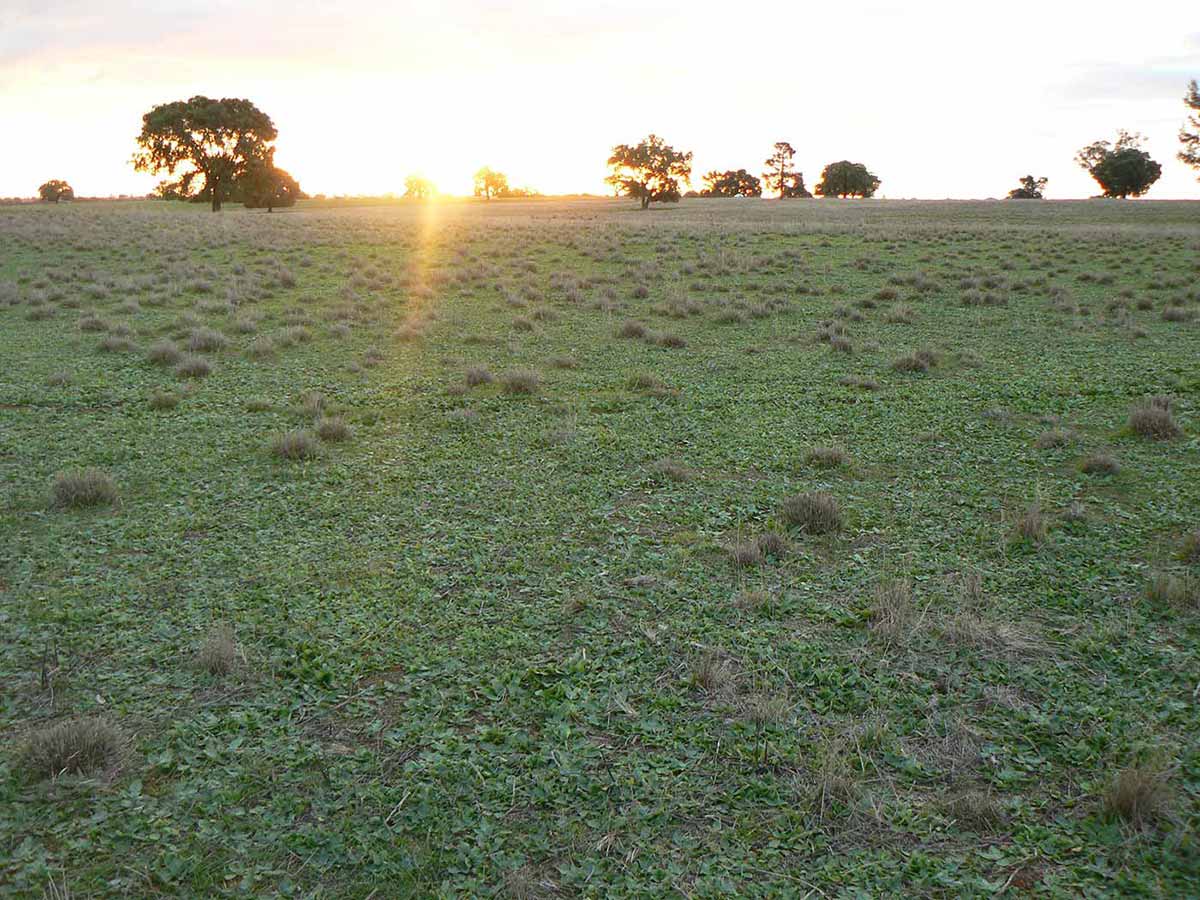 Explore more on the Paddock Report