We walk into North Taylors through the gate in the northeast corner, 15 people. We’ve camped two nights together, and walked since yesterday morning, from the camping reserve at Buckingbong, on the Murrumbidgee River, through farmland.

Late this afternoon we will reach our third and final campsite, beside an especially graceful and elderly kurrajong tree, once lonely in a wheat paddock, now embraced by wide, flourishing bands of acacia shrubs and yellow box trees, planted 14 years ago by the Strong family. In the warm sunshine, we begin walking down the gentle hillside towards the dam, towards the dense shade of another, smaller kurrajong. 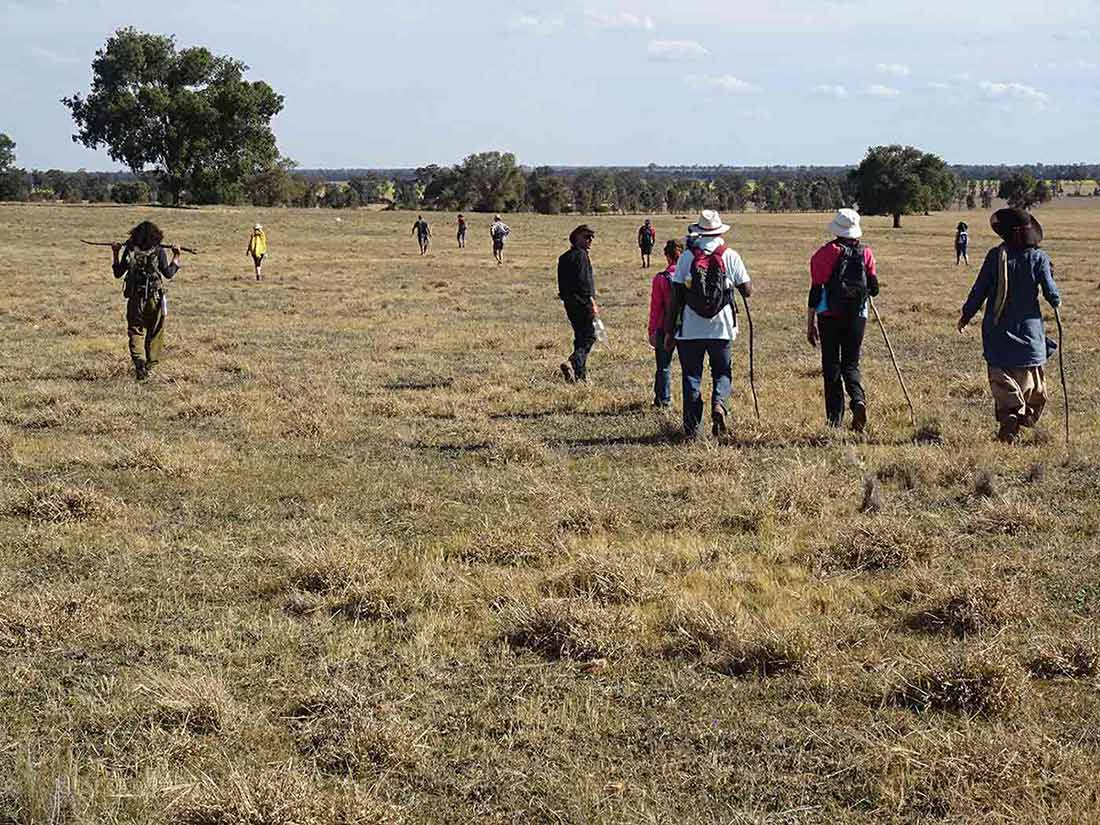 The campers walk into North Taylors

When was the last time, I wonder, that so many people strolled down this slope? From the top of the rise, I realise one meaning of the sight before me. Camping, listening, walking, conversing, we have sunk, a little, into the country. The ecological reality of our material ties to productive terrains like North Taylors, its tussocks and trees, ewes and their lambs — to country that warms and nourishes our bodies — is now drawn by our physical presences, by our immersion in this paddock, up into our minds, and maybe also into our hearts.

Tonight, Gina will talk beside the fire about the influence of our experiences, of the long distances walked, of the shared meals and laughter, of the hard conversations about past and present tragedies, about economic and cultural dynamics that continue to wound land and people. Such experiences, over days and nights, through country, have revealed physical and emotional vulnerabilities, uncovered differences and forged links. We walk down the grassy slope as a group, apart yet coherent, comfortable, knowing something of each other, and the terrain.

Four days ago, the night before I took the bus to Narrandera, Graham had texted a dark question: ‘Do the events of the last 48 hours on neighbouring Brookong station make the walk more poignant or just disturbing?’ Beyond the wire fences of North Taylors are two sites, each marked by intense pain, by anguish that resonates across the farmland that joins them. South, towards the nearby town of Lockhart, on land that was once part of the vast Brookong pastoral run, not far from the venerable kurrajong tree where we will camp tonight, stands an empty farmhouse, its walls and surrounding paddocks witness to fresh horror, to the incomprehensible torment and wounding of murder and suicide.

And behind us, Murdering Island, just around the river bend from our first campsite at Buckingbong, where the resistance of Wiradjuri fighters to the pastoral invasion ended in massacre, 173 years ago. Graham’s message was disturbing, implying that places of historical atrocity might hold active dimensions of past violence and horror, powers that inhabit and shape the present.[1]

Maria Tumarkin writes of ‘traumascapes’, like the one we walk today, as ‘central characters of our times’. In places transformed by suffering, the very ‘ground beneath our feet’ can ‘possess extraordinary power and could in fact be capable of great haunting and defiance’.[2]

On the bus, heading west, I’d seen a news photograph on Facebook, heavy clouds above a long rural driveway, utes, a police car, a bright sweep of blossoming canola. Below the journalist’s report, comments by readers reeled with grief and bewilderment. ‘Heart goes out to family, community and the land. Much healing needed.’ And, ‘This land was not made for the industrial production line, and nor are people.’ Tumarkin’s writings offer the valuable insight that within the paddocks we walk through today, inside this particular traumascape, lies a key for survival, for the drawing of meaning from the two tragedies and their legacies. 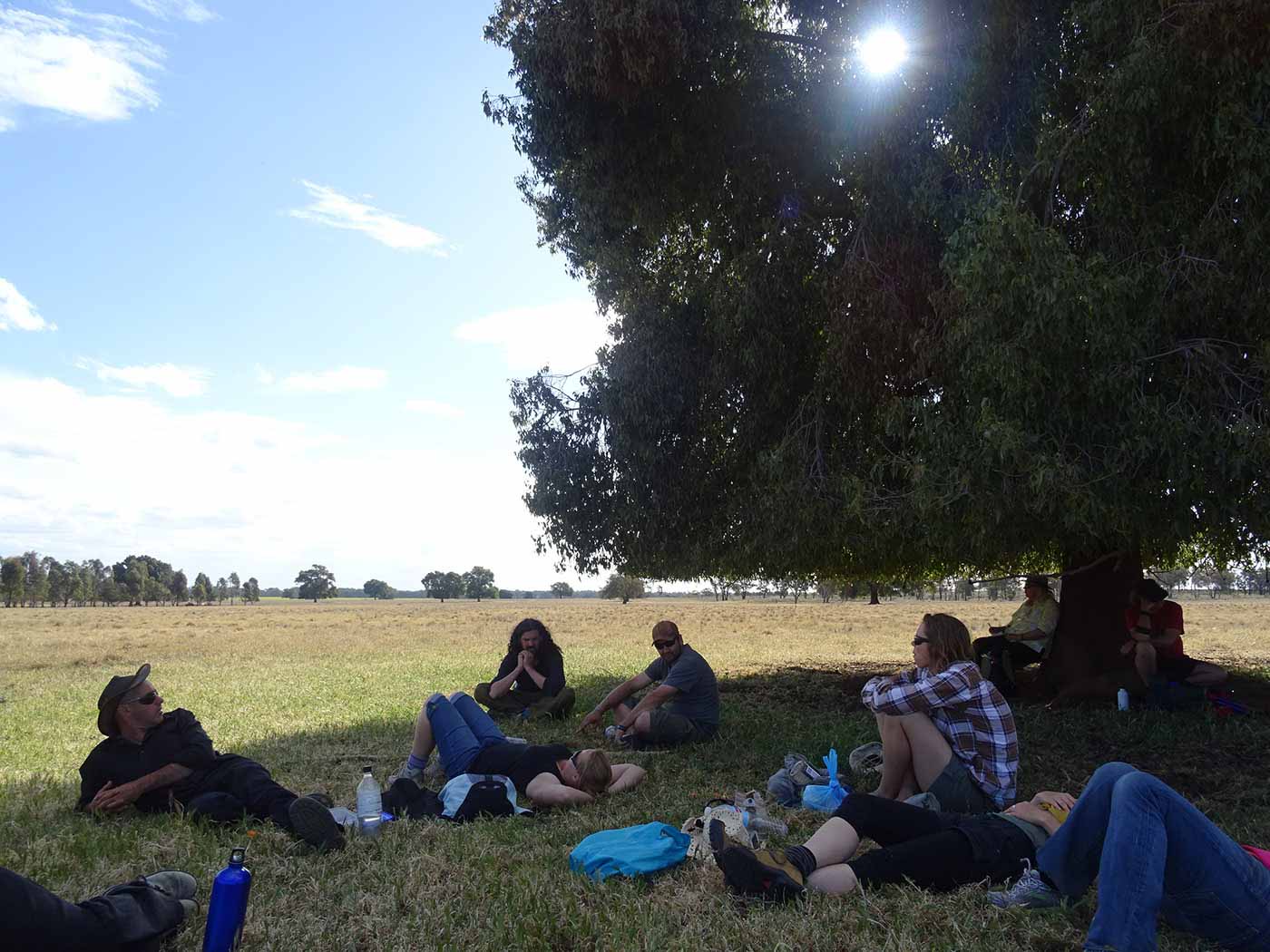 Resting under the shade of a kurrajong tree

We reach the welcome shade of the kurrajong at the foot of the slope, near the tree line and dam. Pete and I walk into the dry depression of the empty dam, looking for the jagged leaves and spherical flowers of old man weed, then return to the group. Sprouting from Gina’s bag is a leafy sprig of bimble box. Two nights ago, while preparing a smoking ceremony on the riverbank, Pete’s grandfather had explained how the rounded, grey leaves of the local eucalypt are ideal. They make dense, soft smoke, gentle on the eyes and throat. The sprig travels with us, carrying Uncle Jimmy’s generosity, the concern he’d expressed quietly in the darkness, by the river, for our safe passage through country haunted by atrocity.

On Friday, Vic had mentioned a farmer at Yenda, on the other side of the Murrumbidgee. Floods had devastated his farm two years ago, and this winter, heavy frosts had destroyed his crops. He keeps calling Vic and Sarah, needing to talk about the Lockhart tragedy, about the impacts of drought and other extreme weather events on people. North Taylors seems dryer than the land we walked through yesterday, greens fading into browns. Only eight millimetres have fallen in the last two months, Graham explains, and the country is even dryer further south.

Throughout the Narrandera region, the cropping season had started well, with good rainfall in autumn. Mild temperatures encouraged cereals and canola to mature and flower early. Then, in midwinter, a series of unusually cold, frosty nights had killed plants, frozen heads of grain, and drawn moisture from the earth.

East of where we sit, ewes with newborn lambs graze the tussocks of North Taylors. I ask Graham about the dryness, how it has shaped his recent decisions about the management of this paddock. Only ewes with single lambs, not twins or triplets, are in North Taylors, he tells the group. With only two mouths to feed, mothers of single lambs eat less pasture. Earlier in the year, a contractor had scanned every belly, allowing Graham to draft the ewe flock according to the number of lambs carried.

In the dense shade, we talk about The Paddock Report and our walk, of attempts to draw useful meanings from the past and the present by paying close attention to the particular patterns encountered within places. Pete shares his hopes and plans to bring Wiradjuri kids back onto their country. ‘If you just stop and listen’, he says, ‘you might hear an answer, you know?’

Yesterday, after lunch, we’d traversed a high ridge through a farm called Currajong. Our feet aching, Allis and Anna had sung the first verse of Amazing Grace, while the afternoon sunlight carried Pete’s song, ‘yaman-dhu ma-rang, yaman-dhu ma-rang, ngawa baladhu ma-rang’, that he’d learned in Wiradjuri language classes. At the end of the ridge, beside a planted line of saplings and young shrubs, we’d met Robert, the owner of Currajong.

In the shade of a grey box, we’d gazed down to saltbush paddocks below, east to the blue rise of Galore Hill, south to the dark swathe of Buckingbong State Forest, where we camped last night. Robert had talked about the history of Currajong, the paddocks and hillsides where he’d grown up, and his affection for them.

The fence lines of Currajong stretch across the highest arable country between Wagga and Hay. Elevation had helped save Robert’s cereal and canola crops from the damage inflicted by frost elsewhere in the region. Robert had told us that he prefers not to grow canola. To produce a bulky, profitable harvest, the oilseed crop needs heavy applications of various chemicals.

Robert worries about fungicide and pesticide residues in canola seed, soils and waterways. Profitability today, he’d explained, was an elusive goal. Wheat prices had remained stable for twenty years, while costs had soared. In the 1990s, governments and industry had recommended bigger machines, larger farms, and more debt. Keeping a beloved farm can depend on keeping a bank on side, on following the advice of a manager who identifies canola as the crop most likely to turn a dollar.

Before we’d risen and started walking downhill into the few remaining hours of the afternoon, Robert had gestured north, towards the Murrumbidgee River and beyond to Lake Midgeon, an expansive grazing property once owned by the Austin family. The native grasses and forbs of Midgeon had grown a lot of wool, he’d explained, and in 1910 enabled an extravagant family holiday by steamer to Europe.[3]

From the hilltop, Robert had directed us downslope towards a teetering stone chimney, the fragile remains of a selector’s home. There I’d found a small piece of a broken ceramic plate, its underside carrying the trademark of its English manufacturer, a coal-powered steamship atop the globe, an assertion of industrial and commercial triumph over distance and time. 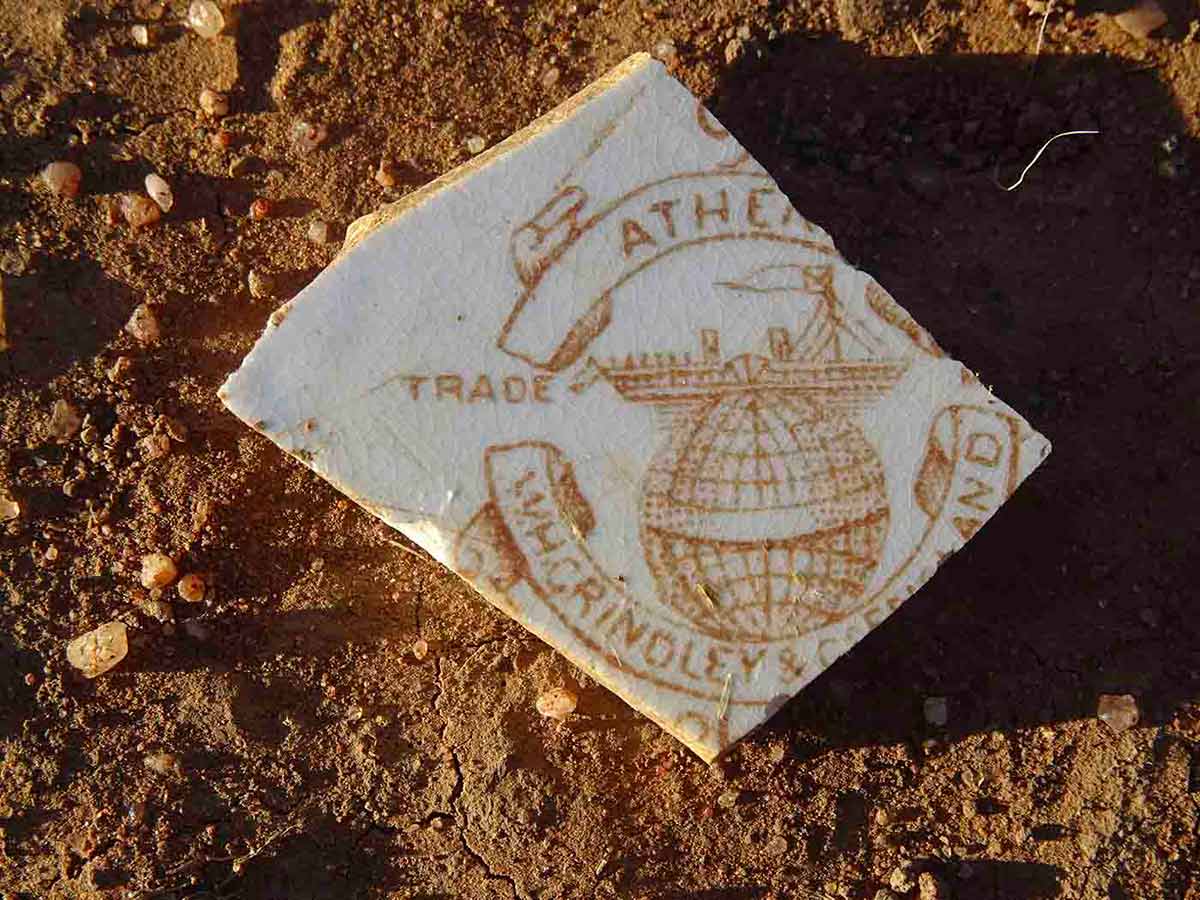 Among the fragile remains of a selector's home, a small piece of a broken ceramic plate, its underside carrying the trademark of its English manufacturer

Now, shaded by a kurrajong tree inside North Taylors, as the afternoon deepens, we stand up and prepare to walk the last few kilometres to our campsite. Together we walk through the tree belt and bend to step through the wire fence.

Before reaching the camp beside the old kurrajong, its long and sinuous limbs reaching down to the ground, we will pass a paddock golden with drying grasses, peppered with the dark mounds of cottonbush, neighbouring land bought by the Strong family two decades ago. Then, it was an overworked wheat paddock, a westward sloping patch of earth repeatedly turned and bared, its indigenous biological community erased by industrial descendants of the steamship depicted on the ceramic shard, by the deliberate, regular imposition of catastrophe upon the land (see Report number 2).

Broad and blossoming sweeps of wattles sown with a hefty mechanical crop seeder, and eucalypt saplings planted by hand, now border and shelter the paddock. In recent years, cottonbush has returned itself to the grassy rise, perhaps the progeny of plants that remain along the roadside nearby. Our tired bodies will drift by the regenerating community of cottonbush, sheep and grasses, and we will see the potential for renewal inside the ground beneath our feet.

Explore more on the Paddock Report