Introduction to King Plates: A History of Aboriginal Gorgets

In 19th and early 20th century Australia, Aboriginal people who distinguished themselves in the eyes of the non-Aboriginal population were honoured with an inscribed metal plaque to hang around the neck. These plaques have been known by many names, but were most often called ‘King’, ‘breast’ or ‘brass’ plates.

However, in this book they are called ‘gorgets’ because they were made not only for men and not only for people who were seen to be leaders. The name was also chosen because the plaques were modified copies of the gorgets worn as badges of office by infantry officers in Australia until 1832. 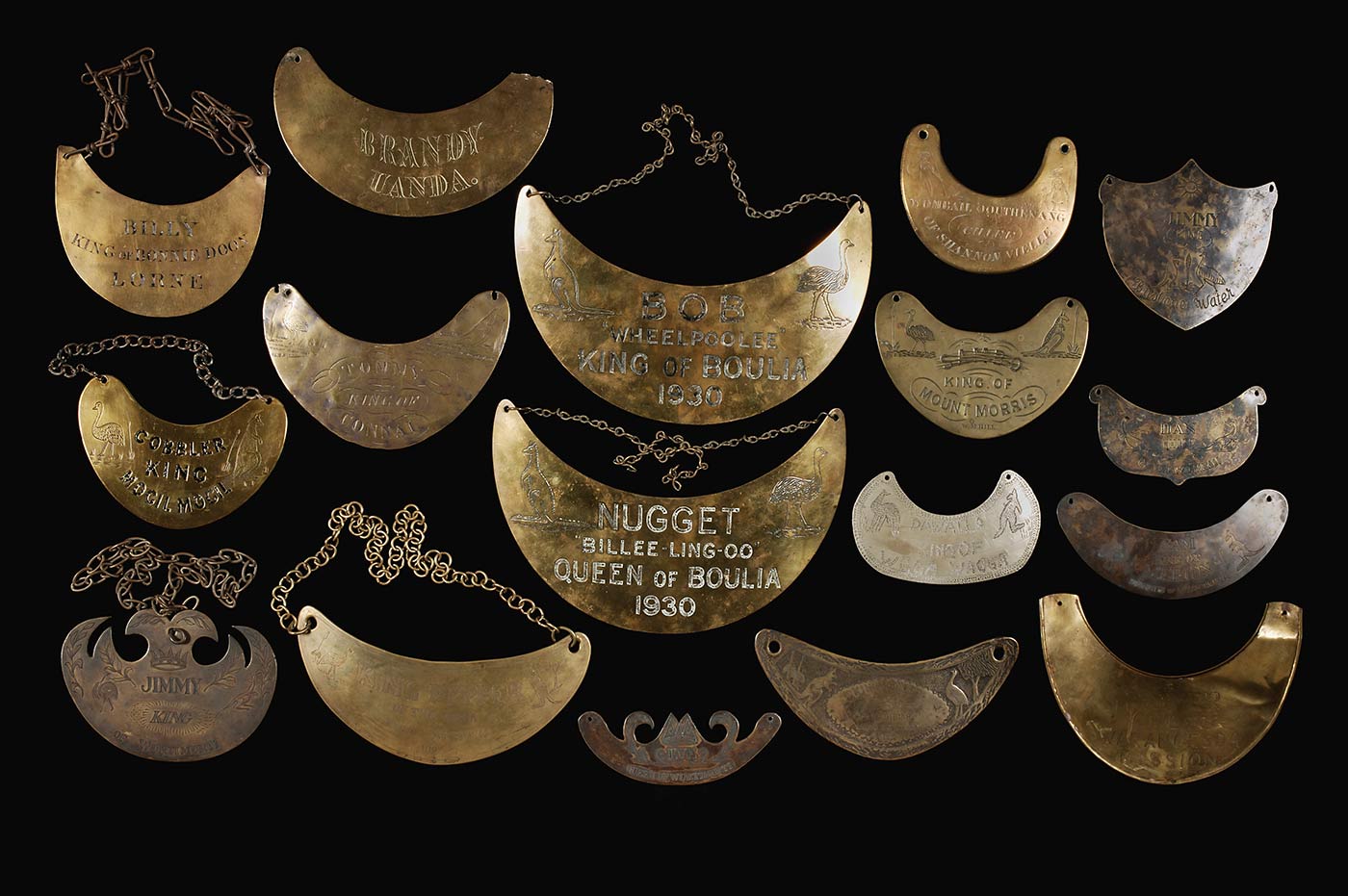 Breastplates from the National Museum’s collection

Herein is a first attempt to trace the history of gorgets made for Aboriginal people and to make available information about some of the people who received the gorgets. The gorgets are tangible physical links with Aboriginal people who were intimately involved in the colonial history of Australia. The names and affiliations inscribed on the gorgets are particularly important as documentary records of Aboriginal history. Ancestral connections with many contemporary Australians may be established through clues which the inscriptions provide.

The large collection of gorgets held by the National Museum of Australia has often been consulted in the course of writing this book. The Museum’s gorgets are an excellent representative sample and are among the largest single holdings of Aboriginal gorgets. The collection has been referred to in this book to demonstrate styles and techniques of production and some of the history of gorgets in general. Fortunately the collection is well documented because most of the gorgets were collected by one 19th-century amateur collector, Edmund Milne. His papers contain valuable and interesting information about some of the people who received the gorgets as well as the history of the objects themselves.

The book begins with a brief history of military gorgets as background to their introduction to Australia. A detailed history of Aboriginal gorgets follows in which Aboriginal opinions about the gorgets have also been given a voice. Edmund Milne, who was probably the most avid early collector of gorgets, is briefly introduced with the history of his collection. A general description of the manufacture and typology of the gorgets follows. After the main text are the appendices which provide supplementary information for any reader interested in researching the subject further.

The first appendix [List of breastplates] is a catalogue of the gorgets held in the National Museum of Australia. It contains a physical description of each gorget and any extra information known about its history that has not already been included in the main text. A photograph of the gorget accompanies the catalogue entry.

The second appendix [Other Aboriginal gorgets] is a list of gorgets, other than those in the Museum’s collection, for which references have been found while researching this book. Some references are for gorgets that are known to exist in private or public collections. Others are simply references that indicate a gorget once existed but its location is now unknown.

The third appendix [Bibliography] is a list of references to all the pictures of Aboriginal people wearing a gorget that have been seen by the author. There is some overlap between the second and third appendices as some of the gorgets in the photographs still exist or there are at least details about the inscription. There is no doubt that many more pictures exist in archives and private directions. The only pictorial collection scanned for the purposes of this book was that of the National Library of Australia which revealed a large number of images. However, other major collections such as that of the Mitchell Library, Sydney, which also contains many pictures of Aboriginal people wearing gorgets, were not searched.

Since the earliest settlement of Australia by the British in the late 18th century it has been common practice for people to write Aboriginal words using their own spelling conventions. Therefore names often have several different spellings, with one spelling often gaining popular currency amongst writers. In the text of this book the most frequently used spelling for any Aboriginal name is used. However, in quotations the original spelling is retained from the source. This point of style should be noted to avoid later confusion.

The research undertaken for this work was by no means exhaustive and there are many more sources, both private and public, which could profitably be investigated. Research in regional art galleries, libraries and historical societies would certainly reward interested people with more information about gorgets and the people to whom they were presented. The bibliography should give anyone interested in pursuing the subject further an idea of the kinds of literary resources available. I hope that the book will encourage further study of gorgets and, more particularly, the Aboriginal people who are named and thereby immortalised on the plaques.

The gorgets made for Aboriginal people were usually decorated with Australian motifs but they are drawn in the style of English heraldic devices. For example, the emu and kangaroo which were often a part of the basic design on Aboriginal gorgets, were usually drawn standing up and looking back over their shoulders in a pose which is called ‘regardant’. Their poses copy the style of English heraldic animals.

The gorgets are described in this book from the point of view of the hypothetical wearer. Therefore left refers to the wearer’s left and right to the wearer’s right. Most Aboriginal gorgets were crescent shaped. They had holes in each of the ‘horns’ of the crescent for a chain or cord from which the gorget could be hung around the wearer’s neck.

Since the earliest settlement of Australia by the British in the late 18th century it has been common practice for people to write Aboriginal words using their own spelling conventions. Therefore names often have several different spellings, with one spelling often gaining popular currency amongst writers.

In the text of this book the most frequently used spelling for any Aboriginal name is used. However, in quotations the original spelling is retained from the source. This point of style should be noted to avoid later confusion.