This horse-drawn milk wagon was used by the Lincoln Park Dairy to deliver milk in the Melbourne suburb of Essendon from the 1940s until 1987. It has an unusually rich provenance and is remembered fondly by many members of the local community.

Rediscovering the wagon's past

The Lincoln Park Dairy wagon was advertised for sale at an online auction site in 2013. The vendor, Ian Buckles, had owned the wagon for more than 25 years after purchasing it from the dairy’s proprietor when the business closed in 1987.

The Museum bought the wagon and started uncovering its story, from its construction in the late 1940s to the day of its last milk round.

Conway Tighe, the owner of the Lincoln Park Dairy until 1987, was one of the first points of contact for the Museum.

Conway had been associated with the family business since he was a teenager, and had driven the wagon hundreds of times on the dairy's suburban milk rounds before the business closed.

Conway’s father, Hugh Tighe, established the Lincoln Park Dairy in Essendon, then a relatively rural suburb in northern Melbourne, in the mid-1920s.

His mother had worked in the dairy industry in Maribyrnong and two of his brothers also operated dairies nearby.

Milk was initially sourced directly from local farms at Greenvale and stored in churns.

The Tighe family worked together to manage the dairy. Conway and his brother Patrick helped their father with deliveries, and their mother Margaret helped manage the shop front.

Fresh from the local farm

During the 19th and early 20th centuries, milk was delivered to local dairies in the early morning directly from the farmer. Each suburb was serviced by a large number of small local businesses, with well-established rounds.

In contrast to today, pre-war patterns of food consumption centred around the preparation of small amounts of fresh produce on a daily basis.

As suburban residential areas expanded during the inter-war era, geographical subdivisions were allied with a local dairy who catered for a certain number of surrounding streets. During the round, milkmen distributed milk either into billies left at the gate, or in bottles.

Before the 1940s milk was delivered in churns, with delivery men ladling milk for each house with a dipper. Customers would either leave an empty billy with payment at the gate or listen for the approach of the horse and meet the milkman with a container.

The 1940s was a time of upheaval in the milk industry. Amidst broad anxiety over other contagious infections, growing concerns were raised by both householders and authorities as to the hygiene of milk. The advent of pasteurisation and the delivery of milk in sealed bottles were two measures established to combat public anxiety.

From two wheels to four

For the Tighes, the advent and demand for pasteurised bottled milk directly influenced their business, most notably in the type of horsedrawn vehicle used for home deliveries.

As a result, a range of sturdy four-wheeled wagons were developed by progressive coachbuilders who modified their trades as motorised forms of transport began to appear with increasing regularity on Australia's roads.

As in the case of this wagon, the design incorporated some of the most practical features of motor cars, resulting in hybrid vehicles that incorporated shafts, a metal panel van with steel axles and solid rubber tyres.

In about 1947 the Tighe family ordered two wagons from Bendigo coachbuilder William J Knight. The increased weight of glass bottles and crates required a sturdier and more balanced four-wheeled wagon and a large strong horse.

A meeting with Bernie Dingle revealed more about this wagon's history. Bernie is a blacksmith and coachbuilder who undertook his apprenticeship with Bill Knight in Bendigo.

Bernie was able to tell us that this wagon was hand-built by Bill around 1947 to a patented configuration.

This lightweight and manoeuvrable design quickly became popular in Melbourne, where it was well-suited to the flat topography and narrow streets.

The design made the job easier to some degree. The milkman would stand on the centre platform, and jog back and forth to the doorways as the horse moved slowly down the street.

It is not known exactly how many wagons were used by the Tighes. Other surviving examples have not yet been found.

Conway recalls how, despite his father's friendship with the local Essendon coachbuilder, he and his brother Pat insisted on commissioning two examples of Knight's innovative (and more expensive) designs. This was a perceived disloyalty which almost caused the two old friends to fall out.

After pasteurisation ushered in the era of the heavy horse for milk delivery rounds, Pat and Conway Tighe bred their own placid, intelligent and surefooted Clydesdales for use in their business.

They aimed for one young horse a year, so as to have a replacement horse for the business if needed, or for sale.

The Tighe's young horses were kept on a friend’s farm nearby, with one or two at their premises on Lincoln Park Road. The brothers would show the young horse at the Melbourne show as a yearling, then drive them in the milk wagon as a two year old.

When training a new horse for the milk round, the Tighes would hire a labourer to walk alongside the horse for about two weeks. After about a month, the horse was familiar with the route and the stops. After about six months, the animal could traverse the round unaided, or with only the smallest of signals from the milkman.

Residents of Essendon still fondly recall hearing the chestnut roan Princess (and later the skewbald Katie) clopping along their street in the early morning. 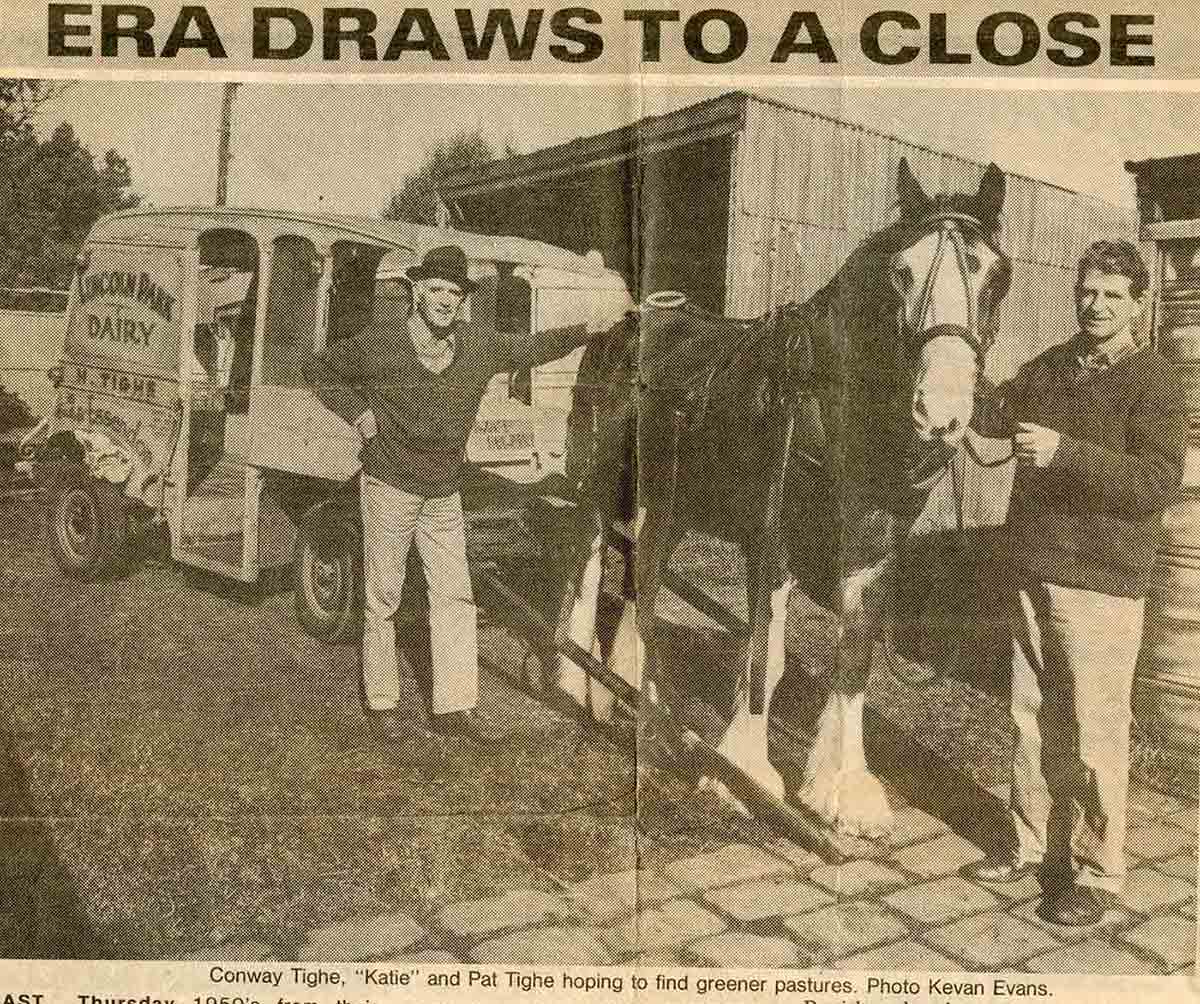 Although they passed through residential streets during the hours before dawn, the Tighes' daily round was a fixed point of contact with many residents, some of whom still hold affectionate memories.

John Ritter, a resident on Hedderwick Street, recalls how upon moving into their new house in 1982, he and his wife Carmen were pleasantly surprised to find that milk had been left for them the following morning.

'We knew you were new residents and would need milk delivered', they were told, 'and we made a guess of your requirement. We knew we’d eventually see you. Don't bother to pay right now as we will leave a bill in your letterbox. Most customers pay once a month or when they remember.'

Vehicles like the wagon were a common sight in inner-city Melbourne during the early to mid-20th century.

In 1953 Melbourne's horse population was estimated at about 500, mainly used for milk and bakers' wagons, council drays or other delivery services.

Explanations for this change are numerous, but in many ways reflect evolving patterns of urban and inner-city living impelled by greater access to transport and changes to domestic life.

Local producers conducting horsedrawn deliveries were particularly threatened by the growth of large consumer centres, such as the first Melbourne Coles, which opened at Balwyn North in 1960. By about 1977 there were about 60 horses in Melbourne.

The 1970s also coincided with greater numbers of motor cars. The danger of sharing Melbourne’s roads proved the greatest challenge to drivers of horsedrawn delivery vehicles.

Although the Tighe’s rarely saw cars as their round operated in the darkness between about 1am and 4am, other slow-moving, poorly-lit delivery wagons were increasingly and tragically involved either in direct collisions with motor cars, or implicated in the destruction waged by a terrified bolting horse.

For many suburban Melbourne residents, improving refrigeration technologies, and other preservatives to prolong the life of perishable food created a distinct shift in patterns of consumption and eating over the 1960s and 1970s.

Many smaller dairies closed during this time, and were bought out by larger dairies. These also faced increased competition from supermarkets, although some turned their trade from supplying individuals to supplying corporations and milk bars.

The Lincoln Park Dairy was one of the last horsedrawn milk delivery businesses operating in Melbourne.

Hugh Tighe’s sons, Conway and Patrick, believe the dairy was delivering milk to 1000 local households at its peak. By the 1980s this had dwindled to just a few hundred. The push by larger dairies for a bigger market share, and the rise of the supermarket, had made horsedrawn delivery unviable.

After the last milk run in 1987 Conway took the Clydesdale Katie to his smallholding outside Melbourne, where she lived into old age. Fortunately for the Museum, Ian Buckles soon purchased the ‘No. 2’ wagon, after approximately 40 years of service in the Essendon suburbs.

Hugh Tighe continued to live on the premises at Lincoln Road until his death in 1990, aged 95. By the turn of the century, the dairy and buildings had been demolished and replaced by a block of apartments.

The timber-framed wagon had been stripped of its external hand-painted panels when it came to the Museum. The panels were intact and reattached during extensive conservation treatment.

The main aim of treatment was to stabilise and preserve what remained of the paint. Conservation work focused on reattaching the flaking paint to reduce the risk of further losses. The wagon was then carefully reassembled.