The disappearance of Ludwig Leichhardt's third expedition in 1848 has been one of the great mysteries of Australian exploration. A small brass nameplate marked 'Ludwig Leichhardt 1848' is the first relic linked to the expedition that is supported by the historical record and scientific evidence.

The German-born scientist and naturalist arrived in Sydney in 1842 and mounted three expeditions to explore Australia's inland.

The disappearance of Leichhardt's third expedition in 1848 and the failure to find any definite artefacts of the expedition has been one of the great mysteries of Australian exploration.

Many theories have been proposed over the years to explain where Leichhardt died, numbers of them concluding he perished somewhere near the Simpson Desert.

Leichhardt remains a household name in Australia, routinely a subject of primary school study. The mystery of the apparently total disappearance of his entire expedition party still has the power to compel curiosity, as investigations as recently as the 1990s demonstrate.

The expeditions of Leichhardt and Sir Thomas Mitchell opened up the northern interior for settlement and convinced pastoralists that there was viable grazing land.

The Leichhardt nameplate is the first relic with a corroborated provenance from the 1848 journey and it resolves substantial aspects of the mystery.

While the plate cannot tell us where Leichhardt died, it proves that he made it at least two-thirds of the way across the continent during his east–west crossing attempt. For a European to do this in 1848 represents a considerable achievement.

Discovery of the Leichhardt nameplate

The Leichhardt nameplate is a piece of brass 15cm x 2cm marked 'LUDWIG LEICHHARDT 1848'. It was discovered attached to a partly burnt firearm in a bottle tree (boab) near Sturt Creek, between the Tanami and Great Sandy Deserts, just inside Western Australia from the Northern Territory border.

Like a number of trees that have been identified elsewhere, and accepted as having been marked by Leichhardt on his fatal attempt to cross the continent in 1848, the boab tree was inscribed with an 'L'. 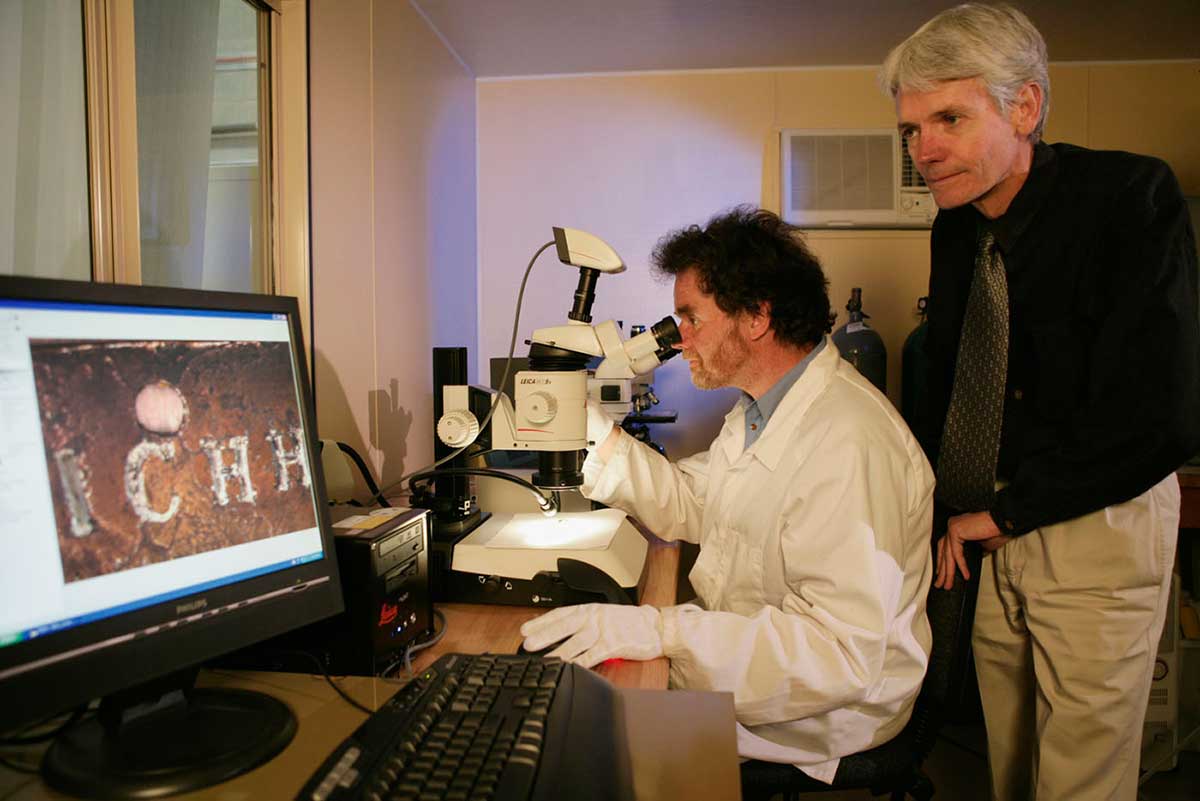 Microscopic anaylsis of the Leichhardt plate at the Museum

The Museum has a detailed history of the nameplate, from where it was found by an Aboriginal man in 1900, to its acquistion from the Bristow-Smith family in 2006. Both the historical record and scientific investigation support the conclusion that both the Leichhardt nameplate and its place of discovery are genuine.

Location of the nameplate

The burnt firearm with the nameplate was discovered around 1900 by an Aboriginal man, known as 'Jackie', who was working for an outback drover and prospector named Charles Harding. Harding disposed of the burnt firearm but recognised the plate as something important.

JF Hill, who also worked for Harding, remembered Harding having the plate. Harding kept it wrapped up and 'polished' it with ash from his fireplace whenever he got it out to show to someone. This care indicates that Harding believed in the plate's authenticity and value. Reginald Bristow-Smith (subsequently District Clerk at Laura, and later at Goolwa, South Australia) got to know Harding and, in about 1917–1918, Harding gave the plate to the then teenaged Bristow-Smith.

Somerville was particularly interested in identifying the place of the plate's discovery. Bristow-Smith readily provided information to Somerville during this project and Somerville published a paper in the Society's 1937 proceedings where he concluded that the plate was genuine.

After lengthy correspondence, Bristow-Smith was finally able to get the plate returned to him in 1964. Bristow-Smith died several years later and the plate passed to his son Jeffery. Since Jeffery's death in 2004, the plate has been held by his wife Catherine and jointly owned by her and their four children. The National Museum of Australia acquired the nameplate from the Bristow-Smith family in 2006.

Proof that the nameplate is genuine

Both the historical record and scientific investigation support the conclusion that both the Leichhardt nameplate and its place of discovery are genuine.

Evidence from the historical record

The National Museum of Australia commissioned extensive scientific analysis of the Leichhardt plate. Scanning Electron Microscope (SEM) tests were conducted under the leadership of Dr Ian MacLeod of the Western Australian Museum.

Leichhardt has been officially recognised for his contribution to science, especially for his successful expedition to Port Essington in 1845.

In 1847 the Geographical Society, Paris, awarded its annual prize for geographic discovery equally to Leichhardt and a French explorer.

Leichhardt's accounts and collections were valued, and his observations accurate. Some decades after his disappearance, however, harsh criticism of his character was published and his reputation suffered.

The fairness of this criticism has been debated. Nevertheless, his scientific contribution has continued to be recognised and he is remembered today as 'one of the most authoritative early recorders of Australia's environment'. He was the best-trained scientist to explore Australia to that time.

The Leichhardt story is a key one in the annals of Australian inland exploration. His failed attempt to make the first east–west crossing may be compared with the tragic Burke and Wills expedition which, while successful in crossing from south to north, failed to return.

Leichhardt's success in making it to Port Essington in 1845 was a major achievement, and his name deserves to be ranked with Charles Sturt, John McDouall Stuart, Edward John Eyre and other successful explorers.

Twenty-first century Australia continues to commemorate Ludwig Leichhardt. A Queensland river, a Sydney suburb, numerous streets and other places across Australia, as well as a species of tree, bear Leichhardt's name.

Nameplate for Ludwig Leichhardt 1848This small brass nameplate is the first relic with a corroborated provenance from Ludwig Leichhardt's third expedition in 1848. The nameplate was discovered attached to a partly burnt firearm in a boab tree near Sturt Creek, between the Tanami and Great Sandy Deserts, near Western Australia's border with the Northern Territory....
On display