Jacob Baldwin was a lifelong campaigner for the abilities of the disabled to be recognised, most notably in his four-year journey around Australia by motorised wheelchair.

Baldwin (1951–2010) was born with cerebral palsy and was paralysed apart from the fingers of his left hand. He was the first disabled person to graduate from rehabilitation counselling studies in Australia and an early proponent of the ideas underlying the National Disability Advocate Scheme. 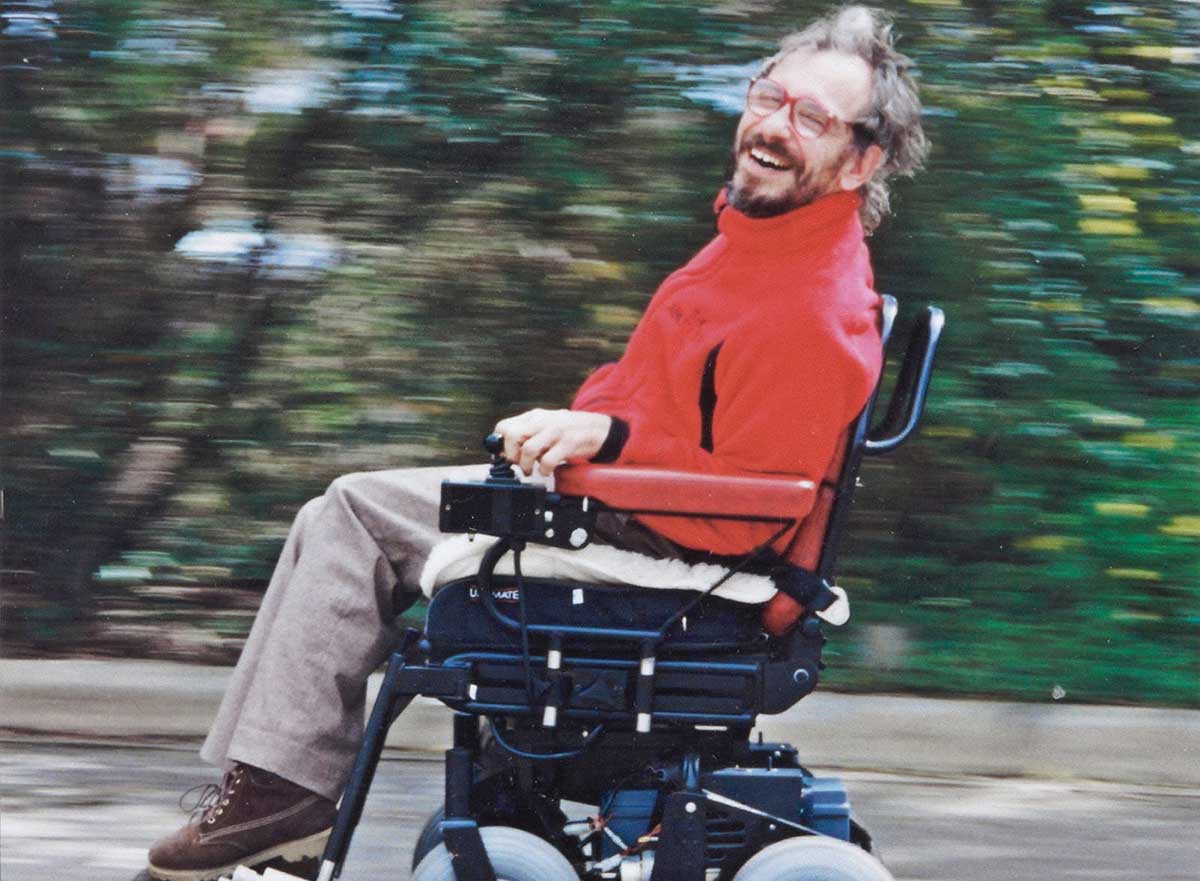 Jacob Baldwin during the Ability Trek journey around Australia

Baldwin's parents, Kevin and Veronica Baldwin contacted the National Museum in 2011. They wished to donate material in memory of their son and his achievements.

Baldwin's partner, Deanna Perry, also offered material. As a result, the Museum acquired a wide-ranging collection that gives insight into the challenges and abilities of a determined and talented man whose achievements have national significance.

Jacob was born in 1951 at a military hospital in Tientsin, China after a complicated, premature birth. His first three months were spent in a humidicrib.

Jacob’s parents, Veronica and Sammy Levin, were of Russian heritage and fled China’s communist government in 1952, arriving in Sydney on board a ship from Hong Kong.

The family settled in Sydney's eastern suburbs. As Jacob grew older, his parents struggled to care for him at home and Jacob lived with his family on the weekends. Weekdays were spent at the Strathallan Hospital in Turramurra, New South Wales, and later the Spastic Centre in Mosman and Allambie Heights.

Jacob’s parents separated when he was six years old and his maternal grandparents, Feddot and Maria Kalinchichenko, migrated from China in 1956 to help care for him.

Jacob described the arrival of his grandparents as a turning point in his life, the beginning of a 'brilliant adventure'. They were determined to help Jacob achieve his goals.

Another turning point took place when Jacob was 16 and his mother married Kevin Baldwin, who adopted Jacob. The Museum holds a pair of callipers designed by Kevin to lessen the effects of the spasms in Jacob's legs.

Cerebral palsy is caused by damage to the brain during pregnancy or shortly after birth. It results in disorders that affect movement and can result in spasms and problems with coordination, posture and balance. It affects different parts of the body according to which parts of the brain are impaired.

The Cerebral Palsy Alliance estimates that 1 in 500 Australian babies are diagnosed with cerebral palsy. No cure is yet known.

The Cerebral Palsy Alliance, formerly the Spastic Centre, was founded by Neil and Audrie McLeod in Sydney in 1945. It was the first organisation of its type in the world for people with cerebral palsy.

Jacob stayed at the Spastic Centre hostel and attended the school in the 1950s and 60s. He went on to work at Centre Industries, a factory established to provide work for school graduates.

The Museum's collection includes a typewriter that Jacob used as a teenager. He was unable to hold a pen to write easily. Instead he would pick out the letters one-handed on the typewriter and he became an adept writer.

Jacob worked in administration at the Centre Industries' offices and was a keen contributor to the staff newsletter, the 'Centre Piece'.

By 1975, Baldwin had studied journalism via distance education and applied for a job at a magazine. He wrote for the ‘Centre Piece’ about how the interview did not quite go as planned:

Despite the cab's lateness I arrived on time. Down 2 stairs and up in the lift – my shoelace had come undone but I forgot about this when I was talking to the receptionist – she was quite a 'dish'! When I met the Editor I introduced myself but when he mentioned his name I spasmed suddenly and my shoe flew off, nearly hitting him on the chin. Some smart remarks entered my head but I thought better of them and on went my shoe and he did up the lace, laughing good-naturedly over the incident. I was beaten to the [job] by an earlier bird. I got some satisfaction by having 2 poems accepted for publication. The Editor commented to me that it was not the disability that mattered, but what I produced on paper.

Baldwin next applied to Cumberland College, now part of Sydney University, to study rehabilitation counselling. He wrote in his application:

My qualifications to embark on such a course are almost nil, but the most important factor is that I feel very strongly, partly because of my own disability, about the unsatisfactory situation facing the handicapped people of today. A lot more has to be done by the able-bodied and the knowledgeable handicapped people in the community. Disabled people are human and more has to be done to introduce them in to the ‘normal’ society and I, personally, wish to be in a position to help toward their acceptance and their general betterment.

Baldwin worked toward this goal for the rest of his life. He was the first disabled person to graduate from rehabilitation counselling studies.

Confronted with a set of stairs to get into the lecture theatre, he waited for his fellow students to lift him and his wheelchair up the stairs. Baldwin taped lectures which were transcribed by his stepfather.

After graduating in 1979, Baldwin worked as a community welfare counsellor. The New South Wales state government recognised Baldwin's skill as an advocate for the disabled and invited him to join the NSW Advisory Council for the Disabled.

He was prominent in the organisation of events for the International Year of the Disabled in 1981 and was a founding member of the advocacy organisation now known as People with Disability Australia. Baldwin’s book Why does that Person Look Funny sought to explain disability to young children.

He spoke to many tertiary students about the needs of people with disabilities.

Between 1992 and 1996, Baldwin travelled about 16,500 kilometres on the 'Ability Trek'. He hoped to inspire others with the great abilities possessed by those with classified disabilities.

The Ability Trek left Sydney in January 1992. Over the next four and a half years, Baldwin and a five-person support crew would travel at 8 kilometres per hour around many of the coastal roads of mainland Australia and Tasmania.

There was a high turnover among the support crew. They encountered difficulties that delayed them for months at a time, such as while they tried to obtain fundraising permits in Perth, and during the breakdown of their bus in Port Hedland.

Businesses and individuals around Australia met much of the Ability Trek team's daily needs by donating food, accommodation, vehicle supplies and money.

Baldwin spoke to schools, community groups and local media throughout the Trek. He reached thousands with his message that having a disability did not equate with a lack of potential.

Advocate for people with disabilities

After the Ability Trek, Baldwin was recognised with an Australian Achiever's Award. He participated in the Olympic Torch Relay in the lead-up to the Sydney Olympics in 2000.

Baldwin continued to promote the potential of people with disabilities. In the 2000s he worked with a range of government and educational bodies to develop assessment, training and access initiatives.

He was particularly interested in travel and transport. Baldwin provided information for people with disabilities about possible holiday destinations. he was accredited to train taxi drivers to work with people who had limited mobility.

In 2006, Baldwin joined the Taxi of Tomorrow team. They designed a New York City taxi that enabled equal access between wheelchair-bound and able-bodied passengers and facilitated shared rides for passengers heading in the same direction.

Baldwin was an early proponent of the ideas that underlie the National Disability Insurance Scheme – that people with disabilities should be able to choose the form of care that best suited them and supported their abilities.

At the second reading of the National Disability Insurance Scheme Bill 2012 in Australian Parliament on 14 February 2013, Baldwin's local member of parliament and long-time friend Janelle Saffin paid tribute to his contribution. The Hansard record reads:

Jacob was a strong advocate for the services following the individual, not the other way around, so that service delivery is not a model for the service that applies; rather, the person gets the service that they need. That was Jacob's dying wish, and he knows that this work is being carried on. It pleases me to be able to stand here and thank the late Jacob Baldwin.

Before Baldwin's death from cancer in 2010, Saffin had reassured him that the scheme had gained the support at the highest levels of government and was almost certainly going ahead.

The Jacob Baldwin collection at the Museum includes photographs, personal writings and papers. It also features objects from the Ability Trek including Baldwin's hat, one of his wheelchairs and signs used to alert drivers that there was a 'Wheelchair trekker ahead'. Other objects include the Aboriginal and Australian flags Jacob mounted on his wheelchair, a donation tin, a T-shirt and promotional material.