You are in site section: Exhibitions

A year of challenges 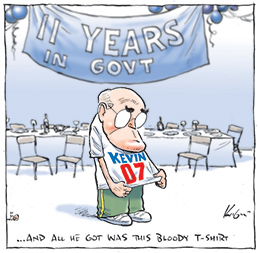 The year 2007 posed a series of challenges to Australian cartoonists. There was the challenge of depicting the new Labor leader Kevin Rudd, whose even features defied the skill of some of the best caricaturists.

There was the challenge of the incumbent government which, having been in power for over 11 years, offered little new material for the pen-wielding satirists.

There was the challenge of convergence in policy which saw both sides of politics agreeing on more topics than they clashed on.

Finally there was the challenge of the unending election campaign which stretched from before the budget until the Prime Minister finally fired the starting gun for the election in late November.

Kevin Rudd's elevation to Opposition Leader in December 2006 raised questions not only of the Liberal Party, but also of the nation's cartoonists.

A symmetrical face gave no obvious lead of how to portray the new leader. Rudd was also relatively unknown, having only been elected to federal parliament in 1998.

Cartoonists were unsure where he stood in the political spectrum and were left searching for the appropriate visual metaphor.

Bill Leak's casting of Rudd as Tin Tin and Eric Löbbecke's depiction of Rudd as a garden gnome were two early efforts.

Rudd's dream run in the polls saw him acquire the mantle of a saint in many drawings. As the year drew to a close Rudd often appeared in cartoons as some kind of nerdy public servant — albeit one who had accidentally stumbled into a strip club. Reviewing these works reveals a sense in which cartoonists, like the Australian people, are still getting to know Rudd. The depiction of Rudd as political leader will no doubt evolve with his political career. 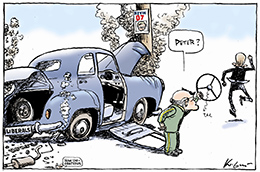 In contrast to the unfamiliarity of Rudd, Howard posed the problem that the cartoonists knew him too well.

The suite of metaphors depicting the Prime Minister was well established, if somewhat worn. His Australian tracksuit, Menzian eyebrows, balding pate and glasses feature prominently in the year's cartoons.

Howard's close relationship with George Bush, and his continued support of the war in Iraq attracted comment from cartoonists, as did the perennial question of when his deputy Peter Costello would, if ever, challenge for the leadership. The much vaunted challenge did not eventuate, resolving itself instead in a promise for the Prime Minister to stand down in the next term. This compromise is beautifully captured in John Spooner's depiction of Costello as a benched Australian Rules Football player seeking solace in a pipe of opium.

While the two parties differed on the key issues of health, industrial relations and global warming, there was a remarkable convergence on many other issues. The fear of being wedged saw an unheralded level of agreement between Labor and Liberal on major policies.

Issues such as the Tasmanian pulp mill, citizenship tests and migration saw opposition politicians carefully endorsing government policy. Dissecting this political phenomenon was not always fertile ground for cartoonists, leaving many nostalgic for the more pugnacious approach of Mark Latham or Paul Keating. 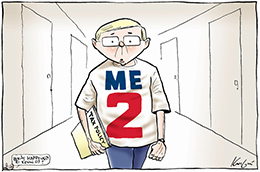 Of all the challenges to face cartoonists during the year, the election campaign was the greatest. The highly orchestrated nature of the campaign was largely devoid of the spontaneity and gaffes that cartoonists rely on. Kissing babies, and visiting hospitals, fetes and childcare centres, provided the normal images of electioneering. Cartoonists gleefully waited for a child to literally pull the Prime Minister down to their level.

The government's massive budget surplus ensured that the dominant visual metaphor was the pork barrel. Cartoonists worked hard to focus attention on the marginal seats battle that dominated the campaign, as in Matt Golding's cartoon 'Marginal teats', in which Howard is depicted as a giant sow providing succour to the voters of key electorates.

It was a challenging year for cartoonists — a challenge, however, that was well met. Cartoonists led the way in developing a popular understanding of Rudd as a leader. They faithfully recorded the beginning of the end of the Howard era and provided snapshots of the major issues and personalities of year. While the election posed a problem for the media in an age of careful image management, cartoonists successfully tracked the twists and turns of the campaign. Looking back on the year through the works displayed in this exhibition, we can applaud Australian cartoonists for continuing to provide an invaluable record of the nation's political life.

Guy Hansen
Behind the Lines Curator