Museum gifted one of the artist’s most significant works in honour of internationally respected champion of Indigenous art, Lauraine Diggins 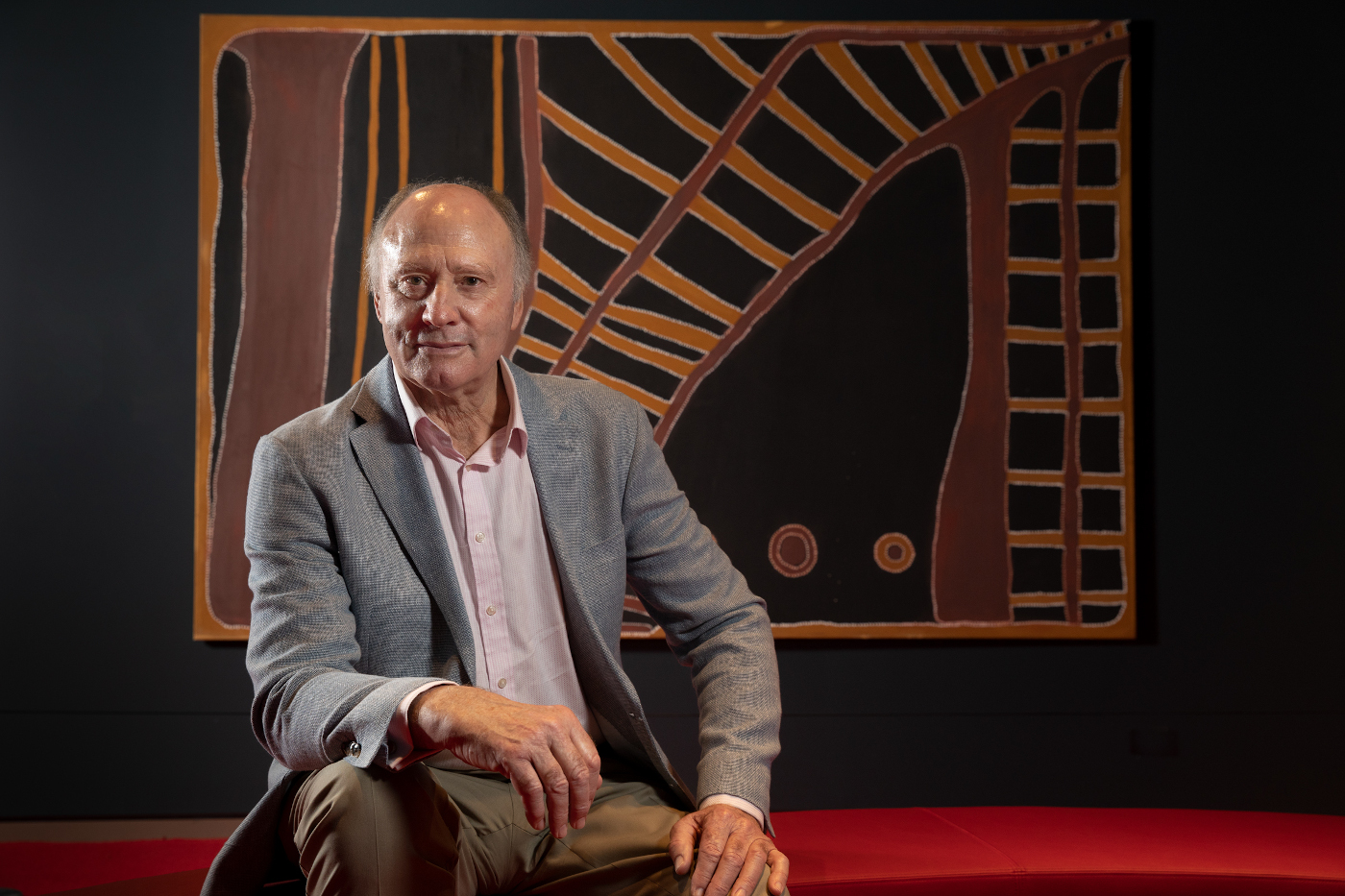 Created in 1996 at the fledgling Warmun community art centre in Western Australia’s east Kimberley region, the monumental artwork by Rover Thomas is considered one of the artist's most significant pieces.

Rover Thomas (1926–1998) began to paint in his early 50s after a lifetime working in the northern cattle industry. He quickly rose to prominence and, in 1990, just nine years after he created his first work, he represented Australia at the Venice Biennale.

The Jabanunga Goorialla (Rainbow Serpent) depicts the Rainbow Serpent penetrating the Earth, following a subterranean journey to the sea in the wake of Cyclone Tracy’s destruction of the northern capital, Darwin, in 1973. Painted in natural ochres, the stunning canvas (2.7 metres x 1.8 metres) reflects a master artist at the peak of his powers.

The Jabanunga Goorialla (Rainbow Serpent) was gifted to the National Museum under the Federal Government’s Cultural Gifts Program by Michael Blanche, Director of the Lauraine Diggins Fine Art Gallery in Victoria, in honour of his late wife Lauraine Diggins OAM, who passed away in 2019.

'During her lifetime Lauraine was determined to do whatever she could and use her considerable influence to ensure that many of the important art works created in Australia and overseas became part of the national estate,' said Mr Blanche.

National Museum Council chair the Hon Warwick Smith AO expressed gratitude to Mr Blanche for the generous gift in honour of his late wife and said future visitors to the Museum would be entranced by the painting.

'On behalf of the National Museum I’d like to express my enormous gratitude to Mr Blanche for the generous gift in honour of his late wife. I know that future visitors to the Museum will be entranced by this magnificent painting and the important cultural story that it depicts,' said Mr Smith.

Head of the Museum's Indigenous Knowledges Curatorial Centre, Margo Ngawa Neale, said the painting is exemplary in the way it speaks to the shared history between Indigenous and non-Indigenous Australians. It simultaneously draws on the ancestral power of Jabanunga Goorialla (Rainbow Serpent) while commenting on the natural and unnatural destructive forces of Cyclone Tracy and mining.

'This master work celebrates Indigenous knowledge, the contemporary relevance of ancestral stories and furthers our understanding of the Dreaming as something continuous and ever present. It is portentously powerful as Rover masterly drew into its ancestral and spiritual domain, issues of critical contemporary relevance around ecological, environmental, climatic and political concerns,' said Ms Neale.

In 1975 Rover had a series of powerful dreams, where the spirit of a deceased female visited him. The woman, who was Rover’s ‘classificatory mother’, died while being airlifted to hospital following a car accident. Over many dream visitations, she revealed to Rover the travels that her spirit made after her death. At the end of her travels, she stood on Kelly’s Knob in Kununurra and witnessed the destruction of Darwin during Cyclone Tracy. Many elders in the Kimberley interpreted the destruction of Darwin as an act caused by the wrath of the Rainbow Serpent. The catastrophe was understood as a sign to strengthen cultural practices weakened through colonisation. Rover was compelled to create a joonba (song and dance cycle) depicting the epic sequence of events, which evolved into the Gurrir Gurrir ceremony.

The Jabanunga Goorialla (Rainbow Serpent) is an ambitious painting in scale, meaning and technical execution. Thomas devised the painting after two trips back to his homeland in 1995 and 1996, when, despite his poor health, he was inspired to create a final, dazzling body of work.

The Jabanunga Goorialla (Rainbow Serpent) depicts the Rainbow Serpent penetrating the Earth, following a subterranean journey to the sea. After destroying Darwin during Cyclone Tracy, the Rainbow Serpent travelled underground, fulfilling his destiny by returning to the sea from whence he came. The masterful use of perspective shifts the viewer between aerial and front-on observations, seamlessly blending abstract and figurative elements. The Rainbow Serpent is variously depicted as separate from the country, yet morphing into it, revealing a contemporary episode in an ongoing creation story. Despite being a key moment in the Gurrir Gurrir ceremony, the Jabanunga Goorialla (Rainbow Serpent) is believed to be Thomas’ only attempt at depicting this final chapter in this story, aside from perhaps some early ceremonial boards.

The concentric circles in the painting are thought to represent topographic features in the vast plains of the Pilbara, as well as the huge mining pits of the region. Thomas identified the painting’s location as the Opthalmia Ranges, west of Mount Newman, in the Pilbara region of Western Australia. This is the Country of Rover Thomas’s family, now occupied by the massive Hope Downs mine. The Rainbow Serpent is thought to have risen in Lake Waukarlykarly (Lake Dora), north of Newman. In this story, he dives into the Fortescue River and travelled on to the ocean.

Rover Thomas was born in 1926 at Gunwaggi – Well 33 on the Canning Stock Route in the Great Sandy Desert of WA, and his skin name was Joolama. His mother was Kukatja and his father was Wangkajunga. Thomas grew up speaking both Kukatja and Wangkajunga languages. When he was 10 years old, his family moved to Billiluna Station on Sturt Creek, WA, where he trained to be a jackaroo. Although he was far from his Country and culturally isolated at the station, Thomas went through initiation into traditional tribal Law. Thomas worked as a stockman and a fencer on cattle stations across the Kimberley, including Bow River, Texas Downs, Lissadel and Mabel Downs, droving cattle into the Northern Territory and Queensland.

Life on the cattle stations was harsh. Workers were paid in rations, the labour was back-breaking and station owners could be cruel, even monstrous in their treatment of Indigenous workers. However, there was always ‘holiday time’ when Indigenous workers went camping, returned to Country and performed ceremony. In this way, despite the restrictive working conditions, cultural practices and languages were maintained. During the mid-1970s a large number of Indigenous workers were displaced from cattle stations following an equal pay for equal conditions ruling in the Court of Arbitration. The ruling had the consequence of displacing the Indigenous workers and their families from the stations, resulting in considerable financial hardship and upheaval. Rover Thomas’s wife was a Gija woman, and in 1975 the family moved to Warmun, a small community on the banks of Turkey Creek, Western Australia.

The mid-1970s was a time of transition for Indigenous people in the Kimberley. The pastoral industry began to decline and the equal pay for equal work decision spelt the end of station life. Meanwhile, resource industries began to realise that the Kimberley region was likely to be mineral rich. Mining companies sent out survey teams searching for diamonds, and mining leases were pegged on hundreds of sacred and spiritual sites. In 1979, the Argyle pipe was discovered close to the Warmun community, unearthing incredibly rare pink, red, purple, champagne and even blue diamonds. The Argyle Diamond mine commenced operations in 1983, with negotiations for the use of the site occurring with senior Gija men. This caused trouble in Warmun, because the Argyle Diamond mine is located on a women’s Dreaming site, destroyed by the open-cut mining pit.

Further north, the Ord River Irrigation Scheme was designed to position Kununurra as the ‘food bowl of Australia’. The damming of the Ord River drowned many sacred sites belonging to Mirriwung, Gadgerring and Gija people. This led to a series of bitter confrontations between activists and police, and for Indigenous people in the Kimberley, it was a new wave of trauma and displacement. As mining and agricultural industries crept insidiously into the Kimberley, there was little compensation for the traditional owners. Rover Thomas settled in the Warmun community – a mixture of cultures and families who would not have lived together prior to colonisation.

Thomas had a series of visionary dreams, awakening in him a motivation to replenish culture. Just before Christmas in 1974, Rover’s ‘classificatory mother’ was involved in a car accident just outside Warmun, where the vehicle overturned on a flooded road. The woman was airlifted to Perth, but died on the plane above the West Kimberley coast. The localised flooding at Warmun had been caused by the same weather system that destroyed Darwin during Cyclone Tracy on Christmas Day 1974. In his dreams, Thomas was given the Gurrir Gurrir joonba. The first ceremonial re-enactment of the dreams took place in 1977 and it continues to be performed today, ensuring this knowledge is passed down to the next generation.

When Thomas began painting, he emerged as an artist of considerable talent. Thomas and his fellow Warmun artists painted on whatever surface they could find – cardboard, plywood, even loose boards still attached to buildings. They prepared the surface by rubbing charcoal as a primer and crushing ochre using a grinding stone. The compositions were delineated with a sparse use of white ochre, a precious clay used for body painting and ceremony over thousands of generations. The ochres were mixed with a natural fixative, often spinifex gum boiled into a paste, resulting in a heavily textured surface reminiscent of the contour with Country. It was a style clearly distinct from the concurrent emergence of acrylic painting in the Central and Western deserts. By mentoring others in Warmun, Thomas and Jaminji kick-started a painting movement known as the East Kimberley School of painting.

Both Paddy Jaminji and Rover Thomas were supportive of the emerging artists at Warmun and encouraged them to paint. Queenie McKenzie was an early protégé of Thomas, and went on to gain considerable fame as a painter and cultural leader, particularly for the Gija women of her community. McKenzie was compelled to paint Dreaming stories, as well as contemporary events revealing dark moments in the Kimberley’s recent past.

Rover Thomas also painted a series of artworks known as the ‘Killing Times’ paintings, pinpointing locations where massacres had occurred in the Warmun region. Survivors and their descendants recalled the horrifying details of massacres that had occurred in living memory. Locations close to Warmun included Mistake Creek, Texas Downs, Bedford Downs and Ruby Plains. Many more may never be known. Oral history had kept the stories alive and it was McKenzie and Rover who materialised them into paint.

Rover Thomas’s work quickly rose to prominence. In 1990, just nine years after he painted his first work, he was selected as one of two artists representing Australia at the Venice Biennale. As his own painting style evolved, Thomas developed a characteristic aerial perspective that was in more in common with Western and Central desert painters.

His work is frequently compared to American artist Mark Rothko, yet Thomas was not exposed to the work of international artists until his trip to Venice. When seeing Rothko’s work for the first time at the National Gallery of Australia, Thomas famously commented, 'that white fella paints like me'. The comparison to Abstract Expressionism familiarised Thomas’s work to a broader audience in Australia with the minimalist compositions appealing to the Western aesthetic.

According to Adrian Newstead, 'Rover Thomas is, according to almost every empirical measure, the most influential Aboriginal artist in the history of this movement'.

Rover Thomas is revered in Warmun as a spiritual leader and is known across the world as one of the most successful Australian artists.