An album of historic photographs featuring early views of Canberra, including the moment on 12 March 1913 when Canberra was named as the nation’s capital, has been donated to the National Museum by the family of former Greens MLA Meredith Hunter.

Compiled by renowned photographer WJ ‘Jack’ Mildenhall, a longstanding public servant who made a significant contribution to the photographic record of Canberra in the 1920s and 30s, the album provides a snapshot of the origins of the national capital.

Mildenhall gave the album, containing 41 large photographs and ephemera relating to the early development of Canberra (1908–13), to friend and neighbour the late John Stevenson, Ms Hunter’s father, in 1944. It has been held by his family since then.

Mildenhall compiled the album from earlier plates held by the Federal Capital Commission, where he worked as a photographer during the 1920s and 30s. The photographs of the 1913 laying of the foundation stones feature Governor-General Lord Thomas Denman, his wife, Lady Gertrude Denman, Prime Minister Andrew Fisher and Minister for Home Affairs King O’Malley. 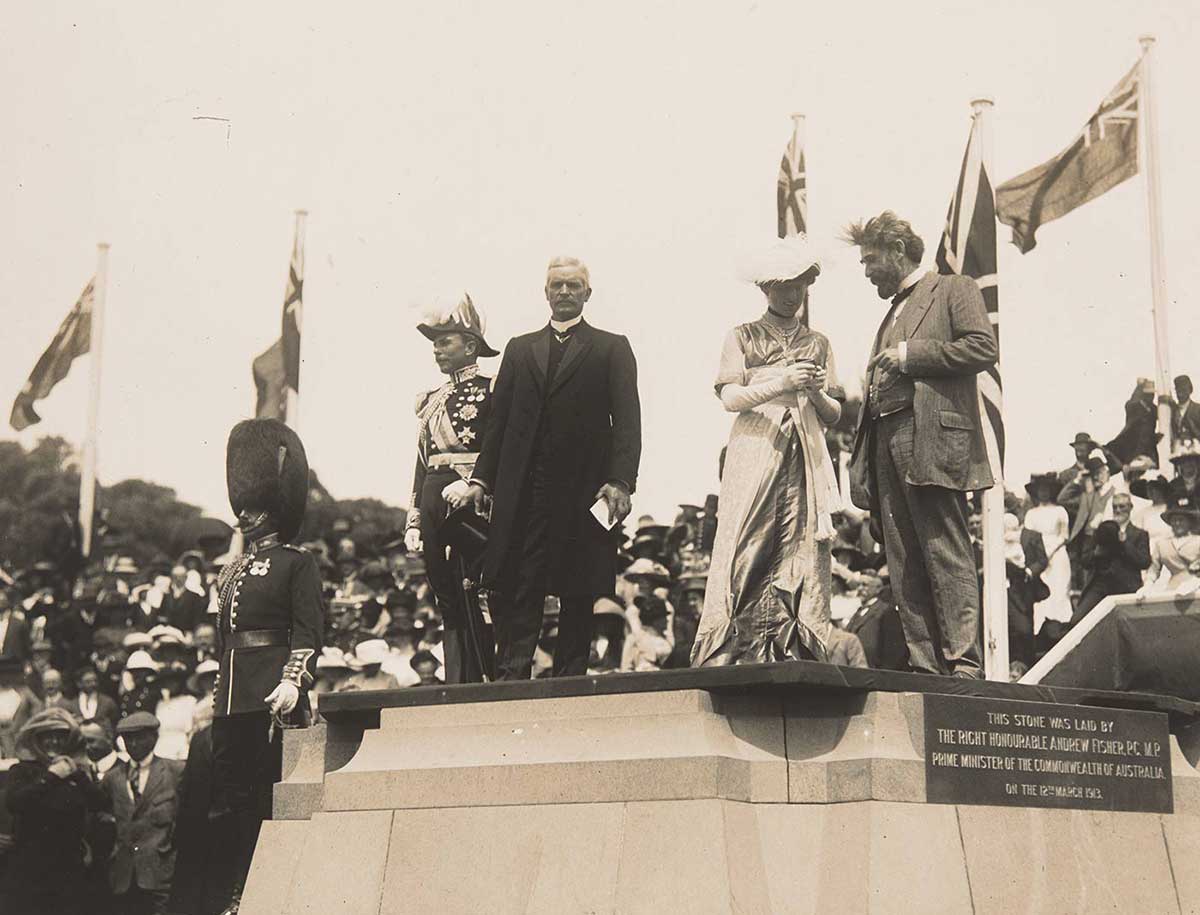 Official ceremony to mark the commencement of work on Canberra, 1913

Canberra historian Dr David Headon attributes these photographs to Claude Vautin, who was among Charles Scrivener’s party of surveyors who determined the best site for the new capital.

The album also connects with material in the Museum’s recently acquired Trevor Kennedy collection, which includes the ceremonial trowel used by prime minister Andrew Fisher to lay one of Canberra’s three foundation stones — a moment captured in the Mildenhall album.

National Museum director Dr Mathew Trinca said, ‘We are delighted to accept this extraordinary album of photographs and ephemera into the National Historical Collection. It captures the founding moments of Australia’s national capital.’

Dr David Headon, who was instrumental in the National Museum acquiring the album from the Stevenson family, said, ‘This is a gift both unique and extremely generous. The National Museum’s wonderful photograph collection is enhanced by the sheer clarify, beauty and historic significance of the images.’

Senior curator Dr Ian Coates said, ‘The album brings together multiple representations of the 1913 foundation stone ceremony, capturing both the events and the people in a way that conveys their humanity. In one of the images of O’Malley you can almost read his thoughts as he imagines what Canberra might become. As a visual record of the origins of Canberra it is unique.

‘Although we have researched and documented most of its content, there are a few things that remain a mystery. One of the photos features seven men posed against a vine covered wall. We have identified Robert Garran and George Pearce and hope to engage the Canberra public’s help in identifying the other five people,’ Dr Coates said.

‘Jack Mildenhall gave the album to my husband John in 1944,’ said Judith Stevenson. ‘John was a teenager and aware of just how special the gift was. He’d be so pleased that this extraordinary album will takes its place among the other treasures at the National Museum of Australia.

The daughter of John and Judith Stevenson, former Greens MLA Meredith Hunter, said, ‘Dad clearly remembered the day that Jack Mildenhall walked up his driveway at Flinders Way in Griffith and gave him this amazing album.

‘He was thrilled that it was displayed as part of a 2013 centenary exhibition at Parliament House and was keen to donate it to a national institution so that others can also enjoy it,’ Ms Hunter said.

There are 41 photographs in the album taken during the period 1908 to 1913 and a number of pieces of paper ephemera relating to the events held in Canberra on 12 March 1913.

These include a program for Laying the Foundation Stones of the Commencement Column, a copy of the hymn played by the massed bands, a seat allocation for luncheon, and a booklet detailing Rail and Road Arrangements for the Ceremony at Federal Capital Site including arrangements for travelers from Sydney and Melbourne.

The collection also includes photographs of Duntroon homestead, St John’s Church in Reid, and landscapes of the Murrumbidgee and Cotter rivers.