Rainbow crocheted bicycle on display at the National Museum

The quirky and colourful bike, donated to the National Museum last year, was chained to a pole outside the Turnbulls’ Sydney home during the marriage equality postal vote campaign and featured on their social media channels as they tracked down the artist.

The Turnbulls and Ms Murphy reunited with Love Wheels at a media event in the National Museum’s Main Hall today. 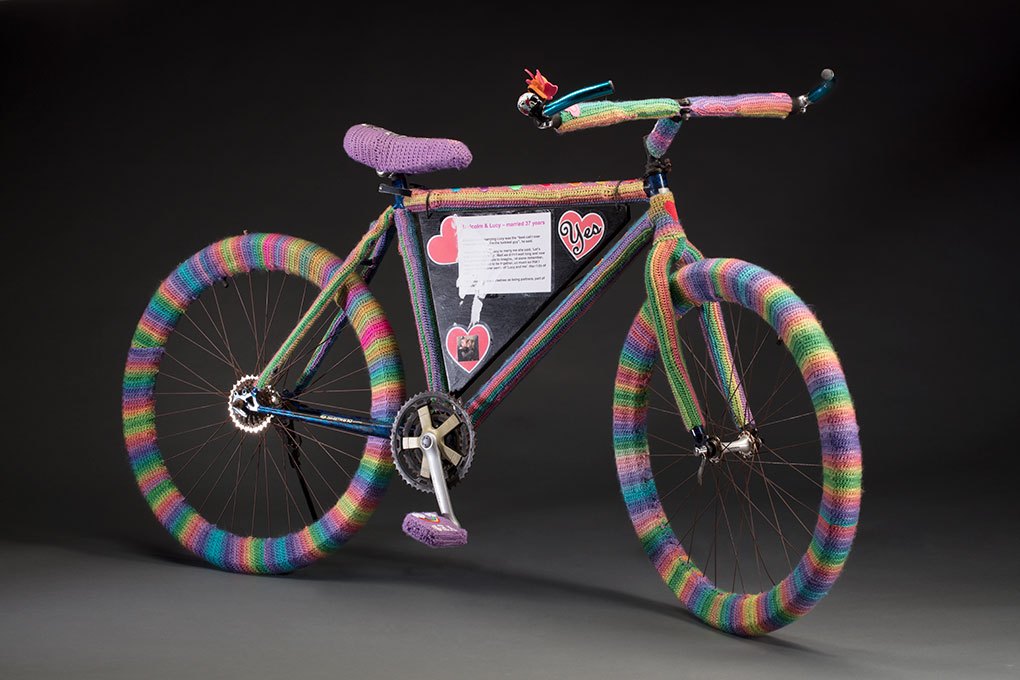 Love Wheels on its way to Canberra – Prime Minister Malcolm Turnbull with the bike in Sydney. Photo: Lucy Turnbull

In a tribute to the Turnbulls’ 37-year marriage, Ms Murphy echoed the ‘Yes’ campaign’s rainbow theme in her crocheted design, which also includes ‘YES’ embroidery on the purple seat, sequined hearts, photographs of the Turnbulls and quotes about their marriage.

National Museum director, Dr Mathew Trinca, thanked the Prime Minister for personally bringing the bicycle to Canberra and noted the marriage equality vote was a defining moment in Australia’s history.

‘We are delighted to receive the Love Wheels bicycle into the National Museum’s collection for all Australians to enjoy,’ said Dr Trinca.

National Museum curator Lily Withycombe thanked Ms Murphy for donating Love Wheels and said the Museum will display the bicycle over the next few days and it is scheduled to feature in another exhibition in March. ‘The bicycle will form part of a wider collection which will include objects reflecting all sides of the marriage equality debate,’ said Dr Withycombe.

On 2 October 2017, Ms Murphy chained Love Wheels to a pole outside the Turnbulls’ private Point Piper residence in Sydney.

On the same day, Lucy Turnbull posted a photograph of it on her private Instagram account with the text: ‘Everyone is having their say but not many say it in crochet or as lovingly & beautifully as the artist who created this bicycle we saw today. Whatever the outcome of the postal survey I hope this bicycle becomes part of a public collection for posterity #voteyes #letsgetthisdone’.

Lucy Turnbull later expressed concern about whether the decoration would survive oncoming storms and passing dogs and arranged for the lock to be cut and the bicycle to be brought into the family residence for safekeeping.

Referring to the donation of Love Wheels to the National Museum, Prime Minister Turnbull posted on his Instagram account: ‘We will miss it but thousands of Australians will now be able to see this beautiful creation which marks Australia’s historic decision’.