This gold licence was issued by the Victorian government to miner ‘J Hedger’ in 1854. Gold licences raised money for the government and helped police to keep track of miners. Miners complained that the licence was too expensive and unfair because they had to pay for it even if they did not find gold. 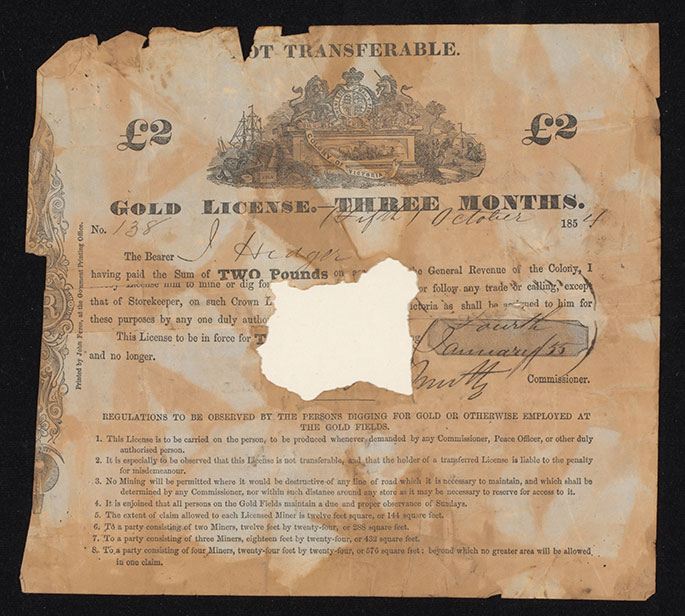 Gold licence issued by the Victorian government to miner J Hedger in 1854. The paper licence is 208mm x 189mm. National Museum of Australia

Gold licences were introduced in Victoria in 1851, soon after the discovery of gold. Licences helped the government to keep track of the large number of people moving to previously sparsely populated areas. They also raised money to pay for roads, administration and police.

The gold licence was very unpopular among miners. They complained it was too expensive and that it was unfair because it did not give them the right to buy property or vote. Many miners refused to buy a licence or could not afford one. The cost was the same regardless of whether a miner found any gold. This meant that miners who were unsuccessful paid the same as those who may have struck it rich.

There was also very little leniency shown by police. Licences had to be carried at all times, meaning if a miner lost his gold licence or if it was destroyed in dirty or wet working conditions, he could be arrested.

Miners held meetings and protests to show their dislike for the licences. In December 1854, near Ballarat, about 500 miners built and occupied a fortress that became known as Eureka Stockade. Miners burned their licences and vowed to resist the government’s authority. The government sent soldiers to attack the stockade. The soldiers overwhelmed the miners and won the battle. Twenty-two miners were killed and others were arrested.

Why was it important for the government to have a licensing system on the goldfields?

What were the main differences between the gold licence and the miner’s right?

Which goldfields events or incidents were a reaction to the unfairness of the gold licence?

Why were these events or incidents significant?