Students will gain an understanding of what life may have been like for people who had to use meat safes and the challenges surrounding the use of a meat safe.

With your students, watch the video 'What is this? Meat safe'.

The opening of the video shows a rainbow stripes moving across the screen from left to right. A cloud shape pops into the coloured stripes containing an image of a green metal meat safe. The video title 'What is this' is superimposed on the meat safe. A question mark bounces into position at the end of the text ('What is this?') and an eyeball rolls around in the dot forming the bottom of the question mark and winks. Upbeat music plays in the background. A swarm of question marks moves across and fills the frame.

Close up of Teddy, a puppet. In front of him on a black-covered desk is a sandwich. Teddy is making eating noises. Angela the presenter, stands behind the desk. Between Angela and Teddy, on the desk, is a green metal box with a pattern of holes punched into it. Above Teddy in the top right corner of the frame is an animated television graphic. A spinning question mark appears on the television screen.

ANGELA: (to camera) What is this?

ANGELA: Oh, Teddy. Don't you know it's rude to speak with your mouth full?

TEDDY: Sorry, Angela. I said, 'It looks like a big box.' Is that hole on the front some kind of handle?

(Angela puts her finger in the round hole in the front of the box. A door creaks open.)

ANGELA: Oh, it's a handle that opens a door on the box.

TEDDY: The door is one whole side of the box. Is there anything inside?

(Pan of the interior of the box.)

ANGELA: I can see some shelves.

ANGELA: They are, Teddy. Can you tell what this is made from?

TEDDY: I think it's some kind of metal, and the sides of the box have got heaps of tiny little holes in them.

ANGELA: They make a kind of pattern, don't they? So can you figure out what it is?

TEDDY: Some kind of cupboard, maybe? I've never seen anything quite like it before.

ANGELA: Well, that's not surprising, Teddy. It was used in the past for keeping food, particularly meat, fresh. It's called a meat safe.

(Teddy, Angela and the meat safe. As Angela places her hand on the meat safe, the word meat safe appears in the television screen graphic.)

TEDDY: For keeping meat safe from flies and insects or hungry animals.

TEDDY: What about keeping sandwiches?

TEDDY: Why not just put stuff in the fridge?

ANGELA: Well, If we lived somewhere that didn't have electricity, the meat safe would be a very good way to protect our food, including sandwiches, from spoiling.

ANGELA: Well, it's a bit like a fridge. But you might notice it doesn't run on electricity. In the past, when meat safes were used, people would put it somewhere around their house that was shaded and would get a bit of a breeze.

TEDDY: Would the breeze go through all those little holes?

(An animation of the evaporative process is shown in the television screen.)

ANGELA: And, if you also hung some wet cloth over the sides of the safe, as the breeze passed through the cloth and the holes, it would cool down the air inside it which could stop the food from spoiling as quickly.

TEDDY: If I go swimming on a really hot day, when I get out of the water my skin feels very cold.

ANGELA: Even when the wind is warm, the air cools down as it passes through your wet swimmers.

TEDDY: Would the meat safe be cold enough to keep ice-cream too, Angela?

ANGELA: Hmm, what do you think, Teddy?

TEDDY: Aw, maybe not. It would have to be freezing cold to keep ice-cream, wouldn't it?

ANGELA: I think you're right.

TEDDY: Can I have an ice-cream anyway?

ANGELA: How about you finish your sandwich first, and then we'll go and get an ice-cream.

ANGELA: I think he said, 'That sounds like a good deal'. I'd better go get some ice-cream for Teddy. It looks like he's nearly ready for it. Bye for now.

TEDDY: (lifting his head from the sandwich) 'Ee ah.

Upbeat music. An animation of rainbow stripes moving across the screen from left to right. A cloud shape pops into the coloured stripes containing an image of a meat safe. The video title 'What is this?' is superimposed on the meat safe. This dissolves to National Museum of Australia logo. 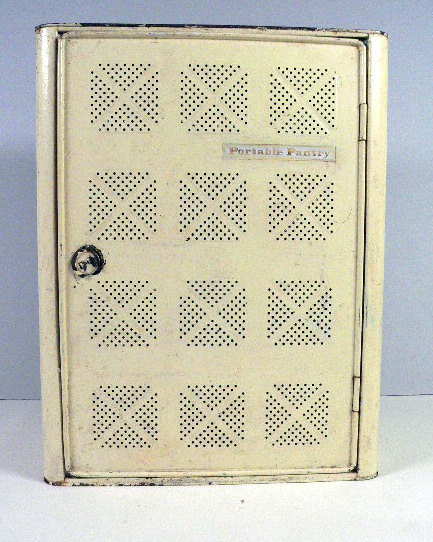 Assist students to summarise the video by facilitating a question and answer session. These questions should be led by the lines of inquiry that the students raise, but some questions may be required as prompts:

Encourage students to imagine what life would be like having to use a meat safe at home instead of a refrigerator. What would be different? Why would it be different? Could they live without treats like ice-cream?

Remind students where people in the past would keep their meat safe (on a shady veranda or in a tree). Ask them why the meat safe would need to be kept safe in these places. Ask students to draw a picture of a meat safe in a safe location, protecting food from heat, insects and other animals.

Print out enough copies of the meat safe image from the Museum's collection to give one to each student. Ask them to take the image home for this homework project: show the image to their parents and ask them the same questions that the students use in class when looking at historical objects.

Ask the students to get their parents to record their responses on the back of the image, and to bring the images back to school.

Once the students have returned their images with the responses on the back, help them to share the responses by collecting the images and reading out the responses to the class. Discuss the responses with the class, with an emphasis on the different ideas about the object and any stories that their parents may have shared about having used one themselves or knowing someone who had or has one.

Explore more on What is this?

What is this?
Typewriter
Stereoscope
String bag

Explore more on What is this?