The Paddle Steamer Enterprise is one of oldest working paddle steamers in the world and illustrates the important role paddle steamers played in Australian history. It is the largest functional object at the Museum and its story is being preserved for future generations. It was listed on the Australian Register of Historic Vessels in 2012. 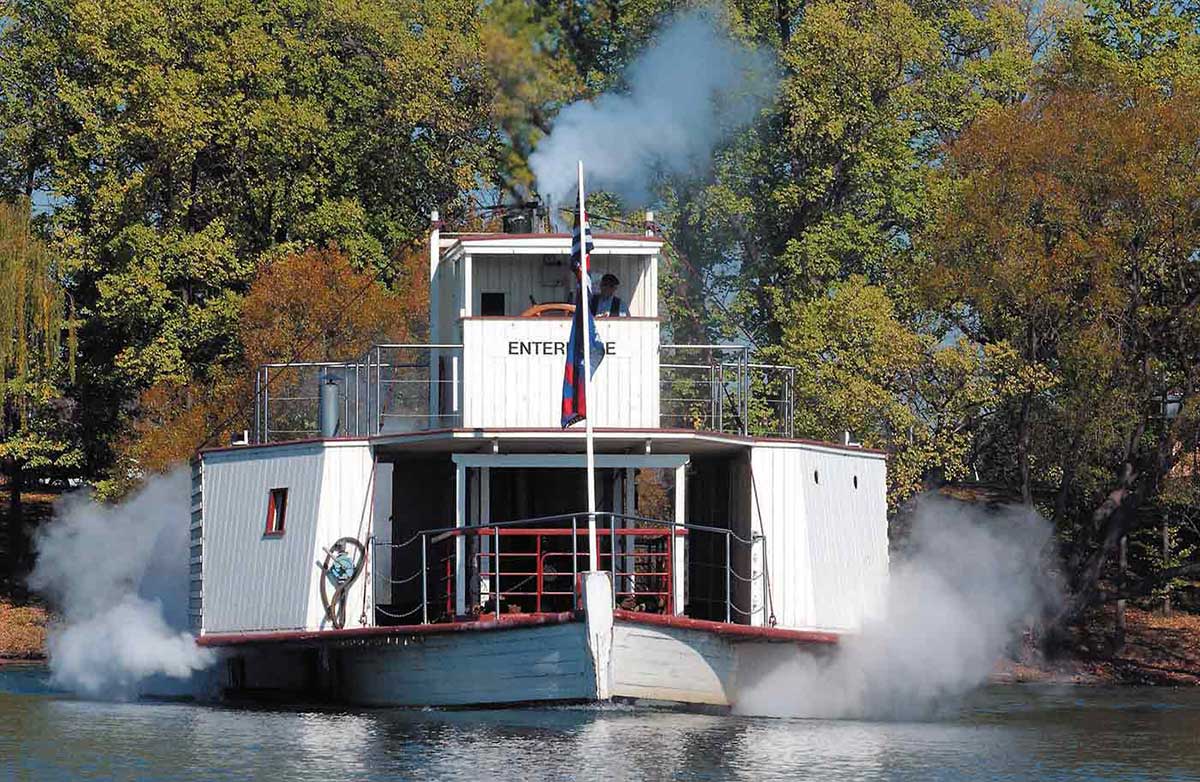 History of the PS Enterprise

The Enterprise has worked as a cargo boat, floating store, fishing vessel, houseboat and showboat.

The vessel was launched in 1878 after being built in Echuca from river red gum. These trees, once plentiful along the Murray River, provided a ready source of hardwood for building and powering paddle steamers. The tannin from a handful of eucalyptus leaves thrown into the boiler also prevented the interior walls from corroding.

The Enterprise is known as a 'shallow drafter', because there is very little of it sitting below the water line — a mere 75 centimetres. This made it suitable for dealing with the varying water levels of the river system. In 1879 it managed to steam on the waterways throughout the year, despite falling river levels.

See these documents for more details about the vessel and its history:

Life on board the Enterprise

In years gone by paddle steamers were home to many families, including the Creagers. August Creager bought the PS Enterprise in 1919 and raised his young family on board while working as a fisherman. From the 1930s he was assisted by his wife Hilda, who was one of the few women at the time to hold a commercial fishing licence.

Over the years a number of adjustments were made to the boat, including the construction of a new galley with a wood stove, and a new master bedroom. A steam hose from the boiler was used to heat water drawn from the river for bathing, washing and cleaning the decks.

Growing up on a boat

Many aspects of life for the Creager children would have been different to a childhood spent on land. Imagine having to walk on a gangplank instead of a footpath to reach your front door.

Jocelyn Creager, at 13 months, follows her cat along the gangplank

Living on the water did have its hazards for the Creager children. As toddlers, each of them fell overboard at least once. Hilda displayed great calm and presence of mind by watching the trail of bubbles from the child and reaching into the water to rescue her offspring when he or she came to the surface!

Although the family lived on the boat, it was moored to a river bank for most of the time. This allowed the children to attend school, and August to maintain a shed on the bank for his motor vehicles and tools. The Creagers also had a vegetable garden and a goat for milk.

The 1970s saw renewed interest in steamboats and their history. In 1973 enthusiasts Graeme Niehus and his father, Bru, restored the PS Enterprise and steamed it on the Murray River.

Later that year, the Enterprise was a special guest at the commissioning of a new paddle steamer, Murray River Queen, on Lake Alexandrina in South Australia. Commemmorative bottles of wine produced by Angove were sold to help fund the Enterprise's restoration and voyages.

Graeme and Bru Niehus quickly found others who shared their passion and the idea to hold a series of steamboat race was born. In 1974 the Enterprise raced against PS Etona, with the event billed as a re-creation of the great 19th century paddle steamer rivalry between the Victorian 'top-enders' and the the South Australian 'bottom-enders'.

Enterprise lost the race, despite taking an early lead. During the late 1970s, Enterprise raced against a number of other steamboats, and was victorious on a number of occasions.

In 1984 the PS Enterprise was purchased by the Museum. It was restored in Echuca, before being moved to its new home on Lake Burley Griffin in Canberra. Since its arrival at the Museum, the Enterprise has carried its working crew and special guests including:

In 1993 the Enterprise was recommissioned for a day as HMA PS Enterprise for its role in the Royal Australian Navy Maritime Pageant. To mark the occasion, the Museum's paddle steamer carried as guests the then Chief of Naval Staff, Vice Admiral Ian Donald George MacDougall AFSM, then Governor General Bill Hayden and then Chief of Defence Force, Admiral Beaumont.

The Museum holds various objects associated with the PS Enterprise and the broader history of paddle steaming in Australia.

This includes early river charts, hand-drawn by riverboat captains as they travelled along waterways. The charts were typically drawn on starch-filled linen. The starch made the fabric rigid and easier to draw on.

Some charts were more than a metre long and were rolled at both ends, allowing only the relevant section to be viewed at a time.

The Museum also holds hundreds of items used on the vessel, many of them linked to the Creagher family.

The acetylene lamp pictured was used from around the early 1900s to the 1920s and worked by burning the acetylene gas created when water dripped onto calcium carbide blocks.

Lamps allowed steamers to travel at night as their broad beams of light illuminated banks and the river.

Another highlight is a scale model of the Enterprise, built by John Robinson, a descendant of the vessel's original owner and builder.

The Enterprise is staffed by a dedicated crew of Museum volunteers. They ensure the vessel is maintained in good working order and that the valuable skills of a bygone era are preserved.

These passionate volunteers dedicate more than 2500 hours of their time each year to maintain the Enterprise.

The Enterprise is the oldest working Museum exhibit and is moored outside on Lake Burley Griffin. Check the Museum's calendar for inspections from September to May, subject to crew availability and weather permitting.

When Captain Charles Sturt first explored the Murray and Darling rivers in 1830 it was immediately obvious that this inland river system had the potential to open up Australia.

Inspired by the use of the Mississippi River in America as a water highway for paddle steamers, Australia's colonial governments thought a similar transport system might work in Australia.

Before the evolution of steam transport, goods and produce were moved by road, using bullocks and wagons. This was slow and arduous, especially at river crossings. If no punts were available, stock often had to be swum across the river and vehicles floated on barrels and rafts.

River travel allowed traders to transport perishable goods to pastoralists on inland properties. In turn, pastoralists could ship their valuable wool clips to ocean ports for export to the mills of England much faster by river.

The first paddle steamer to successfully traverse the Murray–Darling river system was the PS Mary Ann in 1853. Within a few years paddle steamers had become commonplace, giving rise to a booming industry based on river trade. Towns such as Mannum, Goolwa, Wentworth and Morgan thrived as ports on the river highway.

However, it was Echuca, with its 1200-metre wharf, that became the undisputed river capital. In 1864 a rail link was established from Echuca to Melbourne. This made Echuca the preferred destination of river trade because goods could reach their destination even faster.

At the same time, the paddle steamer industry was becoming more regulated and organised. Shipmasters now had to pass a test for certification, and the clearing of snags in the river made navigation much easier.

The Enterprise steaming on Lake Burley Griffin in Canberra

Paddle steamers filled a number of roles on the river. Many towed barges laden with wool, while others served as trading vessels. These carried fresh produce, mail and other goods, such as building materials and occasionally even musical instruments, to people living by the river. Paddle steamers also brought news from faraway cities and towns, and their arrival helped connect isolated communities.

The PS Etona provided for the spiritual needs of the river communities, plying South Australian waters from 1899 to 1915 as a floating church. It carried a minister who performed weddings, christenings and religious services, and also had an altar and organ on board.

Improved road and rail systems during the 20th century largely ended the use of paddle steamers for freight. However, they continued to be used on the Murray–Darling river system as fishing vessels, houseboats and for tourist cruises.

Watch the full PS Enterprise: Live at the Museum video on YouTube

PS 'Enterprise' built in Echuca, Victoria, in 1878Paddle-steamer 'P S Enterprise'. A white painted wooden-framed and hulled side-wheel paddle-steamer that has a wheelhouse in front of a cabin, and a chimney on her upperdeck. The Beverley Iron Company 12-horsepower two-cylinder steam engine is housed longitudinally in the hull above the boiler. It is between two walkways flanked...