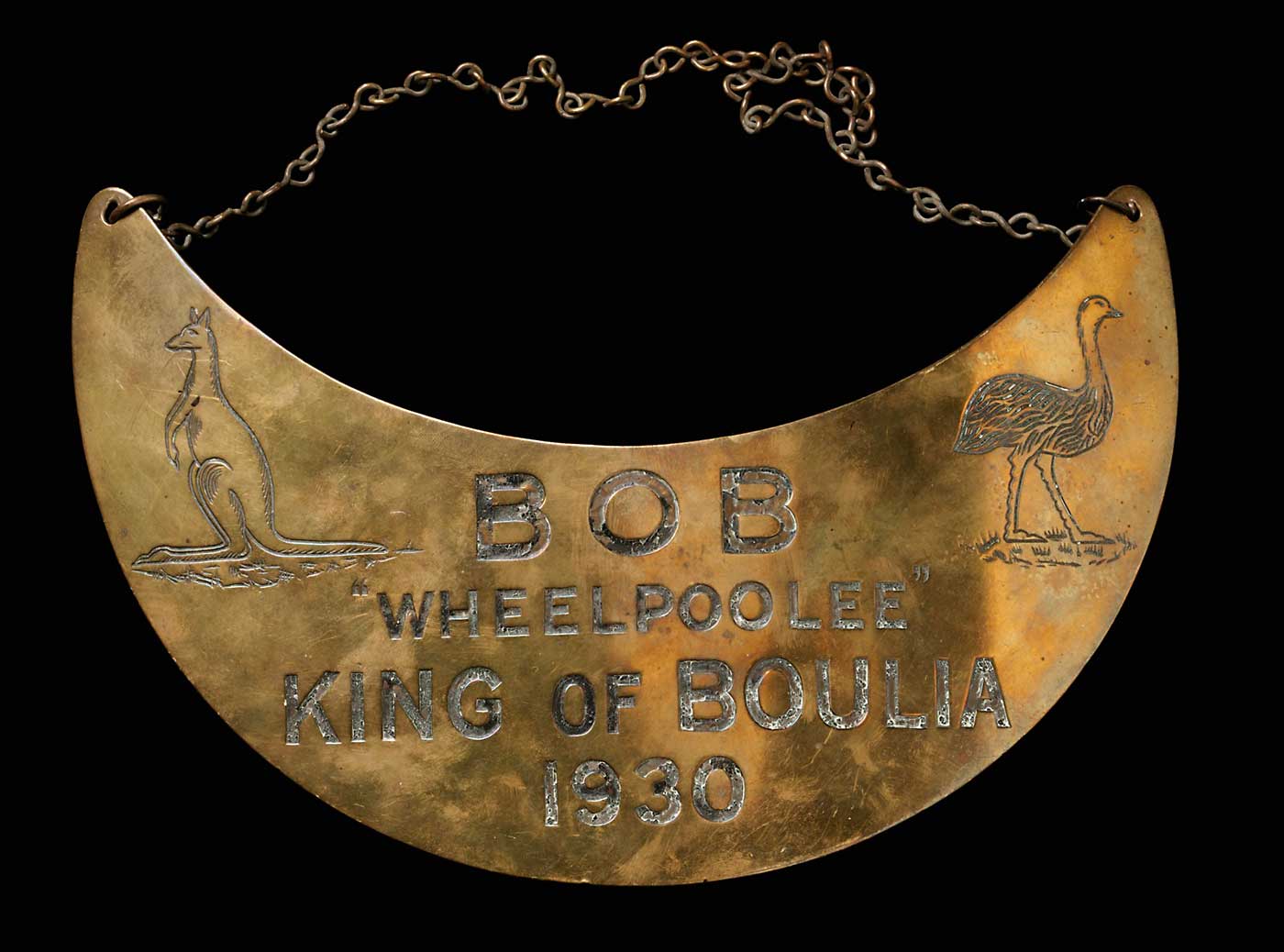 Breastplate presented to Bob of Boulia, 1930

Lachlan Macquarie became Governor of New South Wales in 1810. By 1814 relations between the colonists and Aboriginal people in the area around Sydney had deteriorated and people were being killed on both sides.

In an attempt to combat this situation, Macquarie developed a number of strategies to bring about peaceful relations between the two groups, rewarding friendly Aboriginal people but treating harshly those who defied the invasion of their lands, often sending out the military to capture or kill known 'offenders'.

But of all his strategies, the one that had the most lasting impact was the establishment of a 'chieftainship'. While Aboriginal groups have democratic systems based around consensus decision-making by a group of elders, Macquarie wanted a system whereby each 'tribe' had a chief who would settle internal matters and who would be the intermediary between his 'tribe' and the government.

These chiefs would be presented with a brass 'badge of distinction' engraved with their name and tribe and clearly identifying them and their status. These badges were crescent-shaped and today are commonly referred to as 'breastplates'. Macquarie in fact had a two-tiered system of breastplates — one for the 'chiefs' and the other, termed 'badges of merit', for those people who assisted the colonists but who were not chiefs.

After Macquarie returned to England in 1822, it became much more frequent for others to present breastplates and by 1850 it had become very common practice. In fact, by 1946 when the last known breastplate was presented, hundreds, if not thousands, had been handed out.

They were presented for a range of reasons, including as rewards for saving the lives of non-Indigenous people, for faithful service and to recognise stockmen and trackers.

Throughout their history, breastplates remained crescent-shaped with only rare exceptions. Not all breastplates featured decoration additional to the inscription, but there was considerable variety in the engraved designs of those plates that were decorated.

Many of the early breastplates were engraved using the same conventions that applied to European heraldry, particularly coats of arms. You will sometimes see kangaroos and emus, for example, with their heads turned looking over their shoulders — a common heraldic feature known as 'regardant'. Kangaroos and emus are by far the most common motifs.

Other Australian animals found on breastplates include platypuses, lyrebirds, lizards and snakes. Grass and grasstrees are the most common plants to be found. Other common motifs include Aboriginal people, sprigs, weapons and coronets.

The National Museum of Australia holds about 20 per cent of breastplates now in public collections. Breastplates are truly cross-cultural historical items and are illustrative of Aboriginal–white relations from colonial times until well into the 20th century.

Explore more on Captivating and Curious